The Whim Property is One of Newport’s Greatest Treasures

It once served as the caretaker’s home for Edith Wharton’s abode, Land’s End. 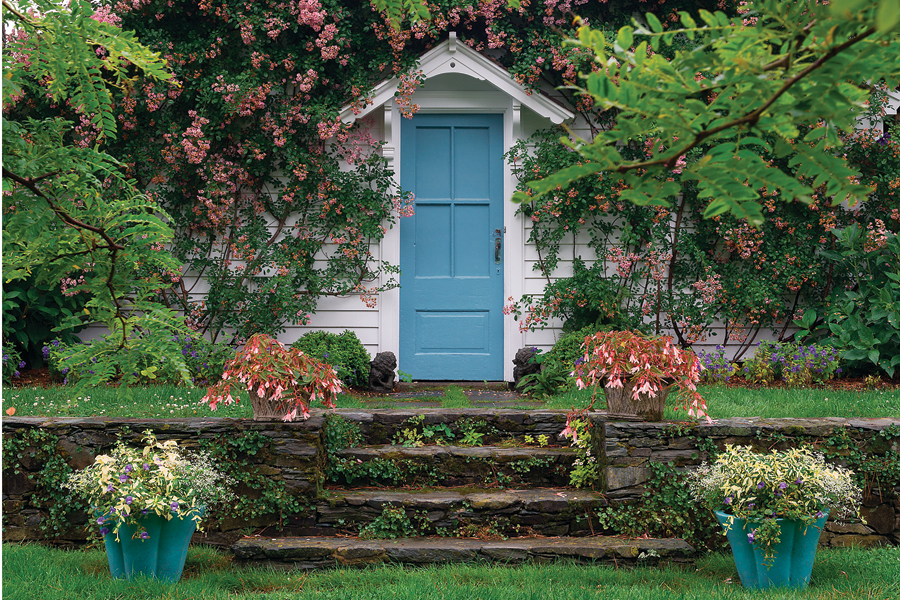 In a quiet street far from the crowds sits a cottage so sweet it could have toppled from a storybook. A prim fence shields the property, giving no hint as to the magnificent display that unfolds just beyond the gate. Listen and you may hear waves rumble. Certainly, you’ll hear bees. From spring to fall, there’s no end to what they uncover amid beds and borders so lush a weed couldn’t root if it wanted to.

Showy players come and go with the changing months. Dozens of red carpet perennials — foxtail lilies and iris in spring, Montauk daisies and chrysanthemums in fall — cozy up with bright annuals, ornamental grasses and shrubs. Wind and salt spray, not to mention the occasional hurricane, are the mightiest enemies but are held at bay by privet hedges and the aid of the Newport firm T.J. Brown and local gardener Shiva Kunz. “Our goal is a constant succession of things to look at. When you can see beauty in every season, then you know you have a good garden,” says Michaud, who likes to share credit with a predecessor, Annie Baptista.

The Whim, as the place is affectionately dubbed, was once the caretaker’s home for Edith Wharton’s abode, Land’s End. The present owner, a doyenne of island society, has a passion passed on by her mother for all things green and growing. Recruiting East Greenwich landscape architect Ray Thayer for help decades ago, she cleverly conceived a plan that has withstood both time and the elements. 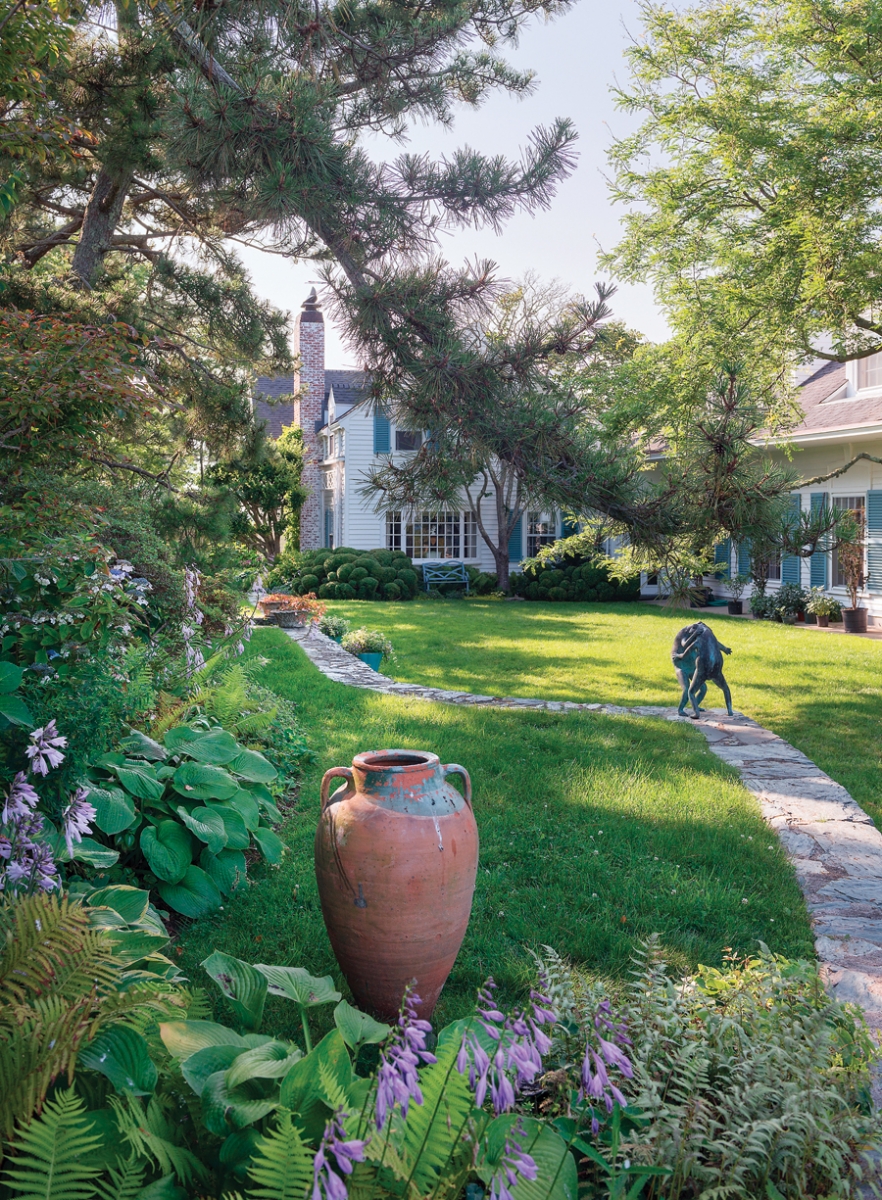 Visitors always swoon, and no wonder, over the dainty pink rose Evangeline that blooms promptly every Fourth of July, transforming the potting shed (above) into a valentine. Still, this heady climber is only a sample of what’s to come. Along handsome stone walls that once supported a greenhouse parade dozens of plants in a beautifully manicured manner that reflects the care they receive. Charged with their well-being, property manager and horticulturist Jerica Michaud maintains a constant vigil. “Originally a cutting garden, the garden has grown bigger over time in accordance with the owner’s ideas and dreams,” she says. 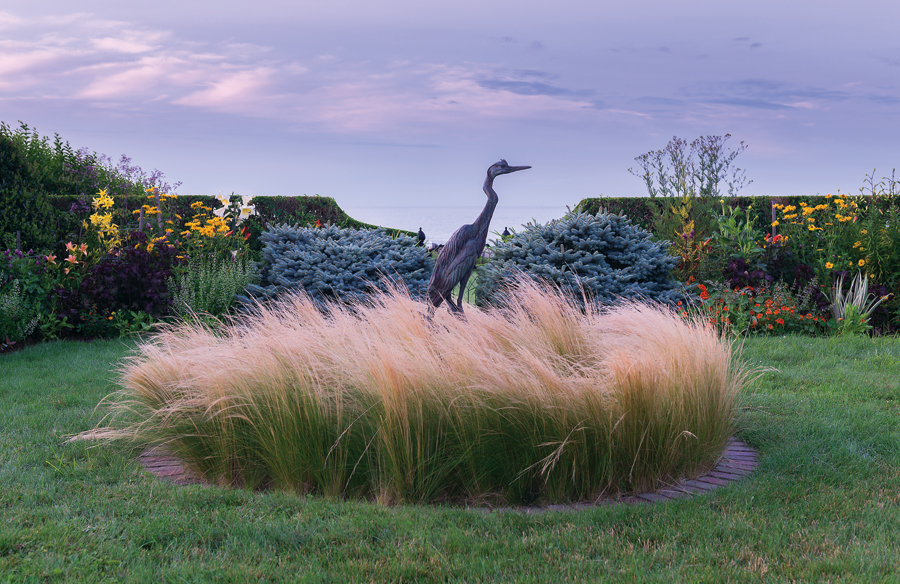 And at the center of the outdoor room amid a bed of rippling feather grass poses Maryland artist Walter Matia’s bronze heron. “The idea was to make the bird look like it’s perched in a marsh,” Michaud says. Behind the sculpture, a picturesque iron gate guarded with blue spruce opens on to yet more steps; this time they’re broad bluestones, festooned with old-fashioned lavender, directing the route to the ocean.

The owner’s creative ideas for keeping interest high are as profuse as her flowers. No matter which way you look, out toward the sea or up the path to the pastel-shuttered house, there’s something to delight the eye. In addition to a number of sculptures, the garden is also outfitted with a great many plant-filled containers, a large wedding-cake-like folly — which she refers to as the Temple of Doom — and a trove of Mediterranean-type terra cotta urns tucked here and there in the borders.

Newporters traditionally adore hydrangeas so there are legions of them as well. But a single plant can stop visitors in their tracks, too. Take the spent alium. Long after the blooms have retired, the architectural foliage remains. Still, it could be the incredible, cloud-pruned boxwood (below) that garners the most attention. Suggesting waves, the billowing shrubs are one more testament, as if we needed it, to the owner’s imagination and Michaud’s prowess.

The generous stone terrace, where the outdoor cushions are as blue as the distant water, is a favorite summer oasis for the owner and her guests. From this relaxing vantage point, it’s possible to survey the entire garden looking out past the robust borders toward the distant horizon.

Twenty-year-old but vigorous white and lavender wisteria vines race along the pergola, providing cooling shade as do some gorgeous seventy to ninety-year-old multi-stemmed Kwanzan cherry trees. To achieve such a distinct shape, it’s thought the trees were either flush cut at some point in the past and allowed to regrow or grafted at their base. Whatever the reason, their unique silhouette fosters this area’s all-too-magical-to-be-real atmosphere and provides a striking backdrop for a plethora of hollies, hydrangeas, azaleas, ferns and hostas that mingle happily below.

Rather than introduce white impatiens (potentially troublesome due to powdery mildew) as they did in the past, these days the owner prefers low-maintenance options such as silvery-leaved brunnera Looking Glass and vigorous grass-like liriope to enliven the north garden. A handful of terra cotta pots housing an assortment of structural plants like elephant’s ear add an additional layer of appeal. And since this is a property where pedigreed accessories — eagles, frogs, bunnies (copies of originals found at Chateau-Sur-Mer) — play a major role, there’s also a beguiling statue of the Greek god Pan — god of fields, groves and wooded glens — to be found, if you follow the dappled path. 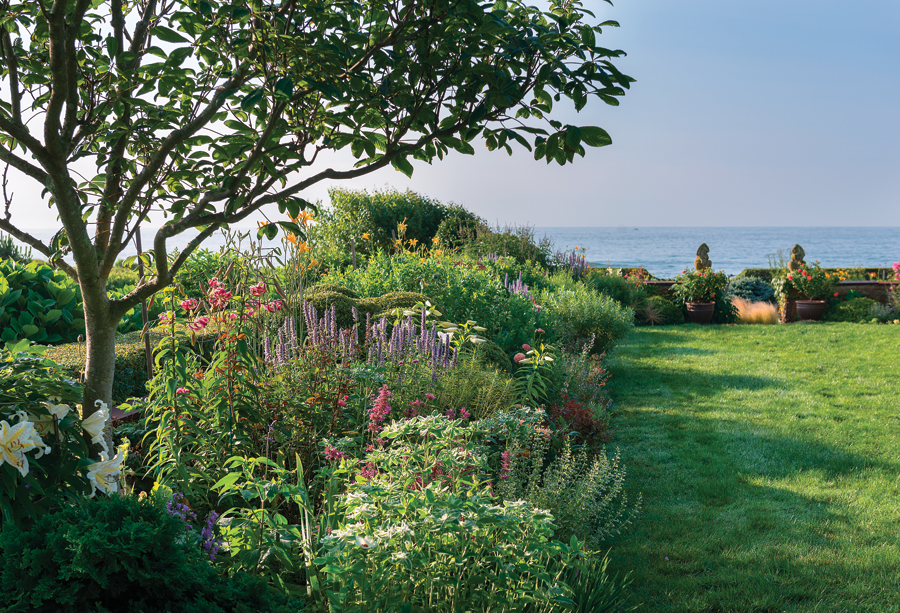 Sleeves up: Memorable gardens like this translate work and devotion. Here the water’s close location, which keeps the garden running about two weeks behind its inland counterparts, determines Michaud’s chores. “I keep a journal with a to-do list working off what we did last year,” says Michaud. “If you don’t write it down, it’s easy to forget. Photos are also wonderful to have. Taken in black and white, they’re a great way to study form and texture.”

Annual fall chores range from collecting seeds (a favorite) to digging up the dahlia tubers (a major time commitment) to taking cuttings. The last are brought inside the house to root along with tender plants that winter indoors. All the majestic beds are cut back and the majority is given a good dose of leaf mold or compost. Needles from pine trees are chopped and applied to shadier beds to keep them properly acidic. And pots that could freeze and crack are stored.

Spring means clean-up. Hollies are pruned. And all the hydrangeas, some grown seven feet tall with age, are trimmed to about chest height or lower with their old canes removed. Containers are filled, annuals arrive and the cycle begins afresh. Pruning and plant divisions happen in fall and spring. “Actually, we keep dividing plants right up until about July,” Michaud says. “After that, it’s all about watering.” To ensure the garden remains pesticide free, nasty visitors like Japanese beetles are removed by hand. Nematodes take care of lawn grubs.