Her doctors told her if she ever wanted to have children, she would have to abort her twins. But last-minute Googling led Heidi Ramsay Caruso to two Rhode Island physicians who finally gave her hope.

Heidi: About seventeen weeks into my pregnancy, my husband, Paul, and I were at our doctor in Boston, and I noticed something didn’t look right. One of the twins was not moving throughout the entire two-hour ultrasound. I had read about twin-to-twin transfusion syndrome in a pregnancy book, and it suggested if your babies get it they will die. So I asked the doctor right then if it was twin-to-twin, and he said there was no possibility. At twenty-one weeks, I had another ultrasound and was told we did have twin-to-twin, but it was acute and so far along that there was no hope of salvaging the pregnancy.

Carr/Luks: Twin-to-twin transfusion syndrome occurs in 5 to 15 percent of identical twins when one fetus (the donor) pumps blood to the other (the recipient). The donor, also known as the stuck twin, has to work harder to pump, therefore having less energy to grow. He produces less and less amniotic fluid and will eventually become almost wrapped in his amniotic membranes since there’s so little fluid surrounding him. The recipient twin ends up with too much blood and excess amniotic fluid in his space. He will tend to swell and may experience heart failure. Identical twins normally exchange some blood while in gestation, but it’s usually a balanced exchange. We’re one of the few centers in the country that offers endoscopic laser ablation as a treatment for advanced cases of twin-to-twin. We have now done about forty of these procedures, which we began offering in 2000.

Heidi: I asked my doctor about the laser surgery treatment for twin-to-twin, but he said it was a scam and that it wasn’t done anywhere in New England. Paul and I had already named the twins Brendan and Brody. I was willing to do anything to save them. So we tried aggressive amnioreduction, in which excess fluid was removed from the recipient twin, Brody. But it didn’t help, and my doctor said if I ever wanted to get pregnant again I had to terminate. I was twenty-three weeks and six days into my pregnancy, so there were only two clinics in the country willing to perform an abortion that late. They made me an appointment for the next day and told us to go home and buy plane tickets. When we got home I went to the computer to book the tickets, but instead started researching like crazy. Around 3 a.m. I found the Fetal Treatment Program’s website just by Googling and right away left what must have been the most fragile, frantic message on Dr. Carr’s voicemail. 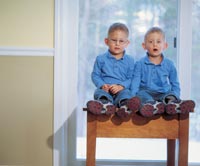 Carr: I had her send over her medical information and suggested she come in right away for an ultrasound to determine whe-ther surgery was her best option.

Heidi: They were the first doctors who gave us permission to hope. Twenty minutes later, we were driving from our home in Salem, New Hampshire, to Providence. I was in pain. I could barely breathe. I had trouble sitting up, so I had to lie down in the back seat. I found out later that I’d actually torn some rib muscles from the pressure.

Carr: The ultrasound showed advanced — stage three — twin-to-twin syndrome. If we did nothing she would have lost at least one of the babies, possibly both, so she elected to undergo the surgery.

Carr/Luks: The procedure takes about an hour. We make a small incision, less than an inch long, in the abdomen. Guided by ultrasound, we place an endoscope, a telecopic lens that’s only 2/25 of an inch, in the uterus (away from the placenta) and find where the babies’ vascular systems are connected. Then, using a laser fiber, we tack-weld the blood vessels shut, closing off blood transfusion from one twin to the other.

Heidi: When I woke up, Dr. Luks came and told me the good news: I was still pregnant.

Luks: She went from stage three down to stage two overnight and went home after two days in the hospital.

Carr: About a week and a half later, Heidi came in for an ultrasound, and it showed the recipient twin had continued to worsen, so she decided to have a Cesarean section. Two days later I delivered the twins, each with his own team. Premature delivery is always a tough decision because it means additional risk for the babies, but it stops the twin-to-twin transfusion syndrome.

Heidi: They were in the NICU at Women and Infants’ for ninety-nine days total. Every single one of those days I drove 180 miles to Providence and back so I could be with them. Brody came home a week and a half before Brendan. Ever since they came home, our donor son, Brendan, has been an inch and a half and four pounds smaller than Brody. They just turned three and are happy, active preschoolers. I made sure they had every single test in the book — brain test, lung test, you name it — and they’re completely healthy. Well actually, we found out they’re cognitively advanced for their age.