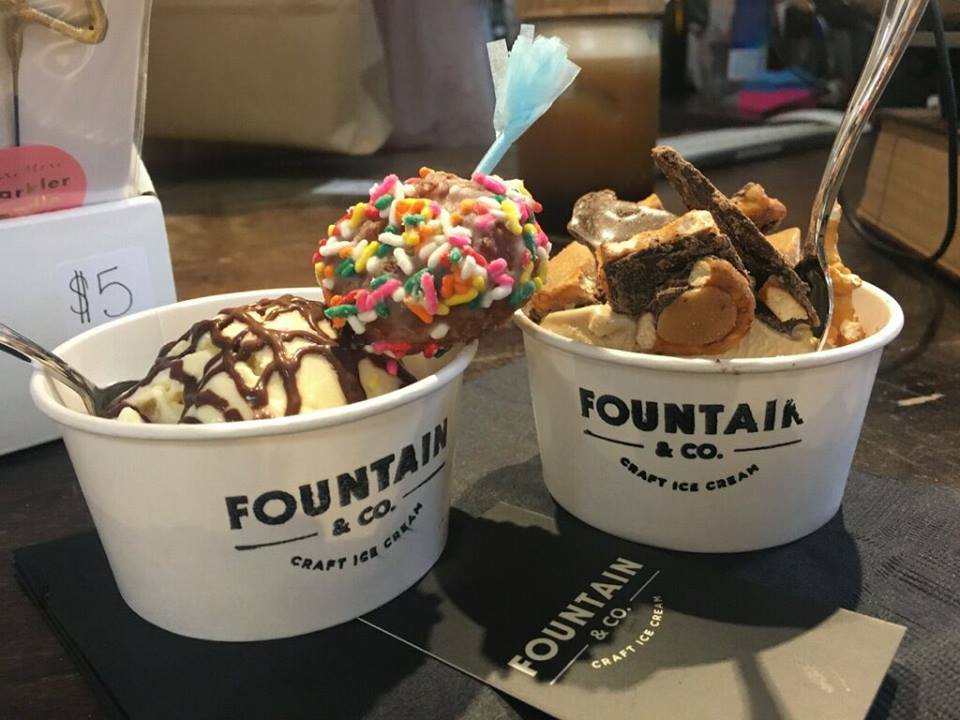 Providence may have lots of ice cream shops, but until a few months ago, it lacked a craft ice cream maker. Fountain and Co. Craft Ice Cream fills that niche with gourmet, handmade scoops in unusual flavors.

“This summer, I bought myself an ice cream machine. I messed around with it a lot,” says Victoria Young, one of the three business partners and young entrepreneurs that make up Fountain and Co. Her friends helped her taste test different flavors, and she soon realized she could capitalize on bringing craft ice cream to Little Rhody. “I was just having so much fun with it so I figured, why not?” Young says.

Who better to partner with in the craft ice cream business than the owner of the state’s most popular gourmet doughnut shop? Young collaborated with business partner Paul Kettelle, co-owner of PVDonuts, and Jessica Debry, for initial meetings on West Fountain Street, one of the many inspirations for their business name. “The ‘and Company’ is a really important part of the name, because for us, it is all about community and hanging out together,” says Young as she leans back on the soft blue couch inside Stock Culinary Goods in Providence, one of the few sites for the ice cream popups.

Kettelle showed Young the ropes of owning a Rhody-based business. He also sees a bricks and mortar location in the ice cream company’s future. “We would want it to become a space where you can gather,” he says. “It’s not about just going there and getting some ice cream and leaving. It’s about going, getting ice cream and hanging out with your friends.”

For now, Fountain and Co. can be found at several popup locations throughout the state. The ice cream flavors are constantly updated and tailored to the seasons. “Changing the menu gives us the chance to make the creations unique and it makes people want to try a flavor they wouldn’t normally have,” Young says. “It is one of our goals to introduce odd ingredients into ice cream because everyone likes ice cream and it really is a good tool to introduce people to new things.” So far, Fountain and Co. has offered twenty-five to thirty different flavors, and they only plan to expand from there.

When it comes to the ice cream, Young is the mastermind, says Kettelle. She takes inspiration from friends and conversations, and loves hearing people’s suggestions. But the flavors found on the menu also depend on seasonal produce. Young sources from local farms by purchasing fruit, herbs and other ingredients that are available. So, if you stop by a popup in the middle of winter and again in the middle of summer, you are sure to find a new, seasonal menu with a variety of flavors you haven’t had before.

Vegans and those with lactose intolerance can also try Fountain and Co. On every menu, at least one of the options is vegan, and all sorbets are dairy free. “We like the ingredients, we like the flavor and we like the end product and it happens to be vegan or lactose free,” says Young. “We are just happy to be able to offer that to people.”

So where can you find Fountain and Co. next? Check out their dessert course for the Dinner Bell Friendsgiving at Pilotlight PVD this Sunday at 5 p.m., or visit them on select Sundays at Stock Culinary Goods for Fountain and Co.’s occasional collaboration with PVDonuts. “It’s a well-kept secret if you ask me,” says Young. “The lines at PVDonuts can get pretty long in the morning, but you can stop by our popup and grab a doughnut and ice cream.”

What’s better than that? Well, nothing really, besides bringing home an entire pint to enjoy. The partners are also offering a limited number of hand-packed pints for the week of Thanksgiving so that you can bring the ice cream home to share with good company. fountainandcompany.com

Is the Doughnut Trend Here to Stay?