The Dish: On the Farm with Bluff Hill Cove Oyster Company 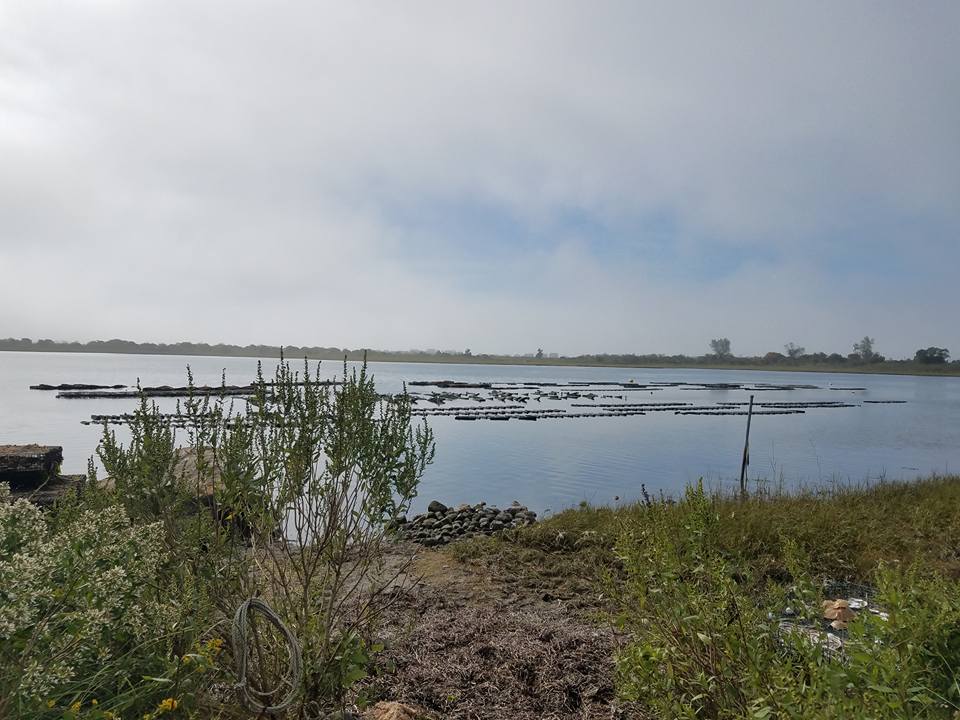 Editor’s Note: The November issue of Rhode Island Monthly is all about oysters! This story and video is a teaser for what you can expect to see in this issue. The November issue arrives in mailboxes starting October 23, and it’s on newsstands on October 30. Order a subscription.

White Horse Tavern executive chef, Richard Silvia, and line cook, Erin Penhall, came along for the adventure, which involved a lot of shucking and slurping while we filmed a video about the operation.

Cataldo’s only been farming for a few years, but he’s owned his waterfront property on Bluff Hill Cove for more than two decades. He produces oysters on a leased part of the pond in front of his house. He became interested in oyster farming when an oyster farmer friend gave him a scoop of baby oysters to grow under his dock, just for fun. When those oysters doubled, and then tripled in size, he realized it was time to get some bags and a permit. A former musician, publisher and fisherman, Cataldo had found his niche. 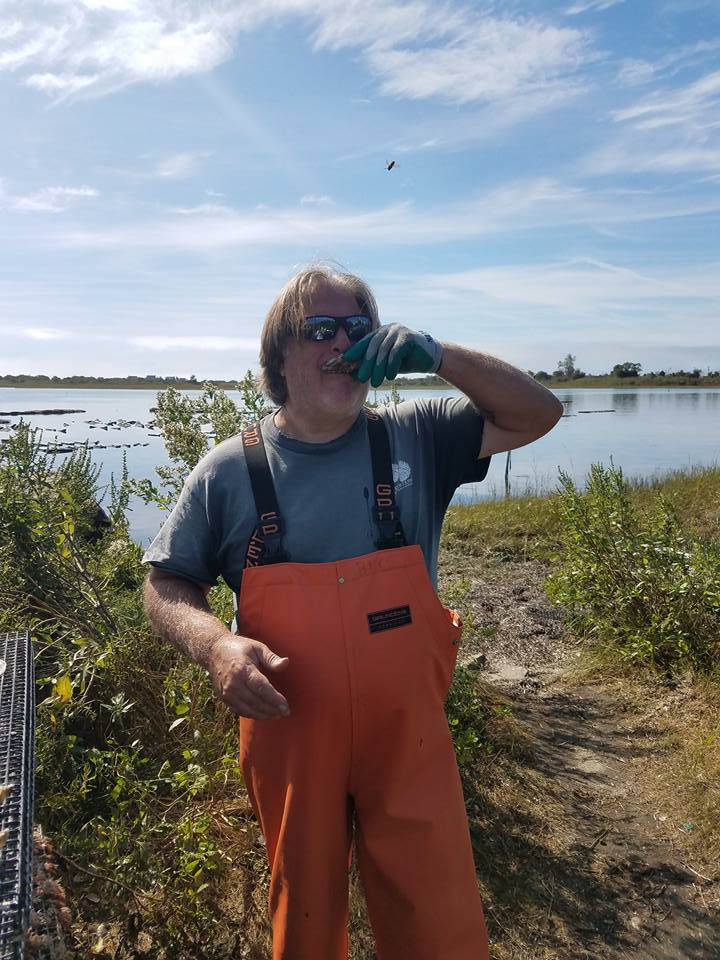 Harvey Cataldo enjoying one of his oysters.

“Something clicks in your head,” he says, while wearing bright orange waders and short sleeves that show off an oyster tattoo on the side of his forearm. “If you do it for the money, you aren’t going to be in it long. Even the guys that are very successful, they love it, or they wouldn’t be doing it. It’s something about watching them grow.”

Cataldo uses flip bags to grow his Winter Pearls. The first five flip bags he used came from an experiment run by Roger Williams University’s aquaculture program three years ago. He’s expanded every year since. They hang to dry along a line, and as the tide comes in, the bags flip into the water. The current flows through the mesh openings in the bags, triggering the oysters to feed on algae. “The most algae is in the first twelve inches of the water column, because that’s where the sun’s beating down on the water, and the algae like sunlight,” Cataldo says. “The tide comes in and all those oysters are tumbling three or four times a day, back and forth and back and forth. When that water starts hitting this bag, they open up and they know they gotta feed. When the tide goes out, they all clench.” 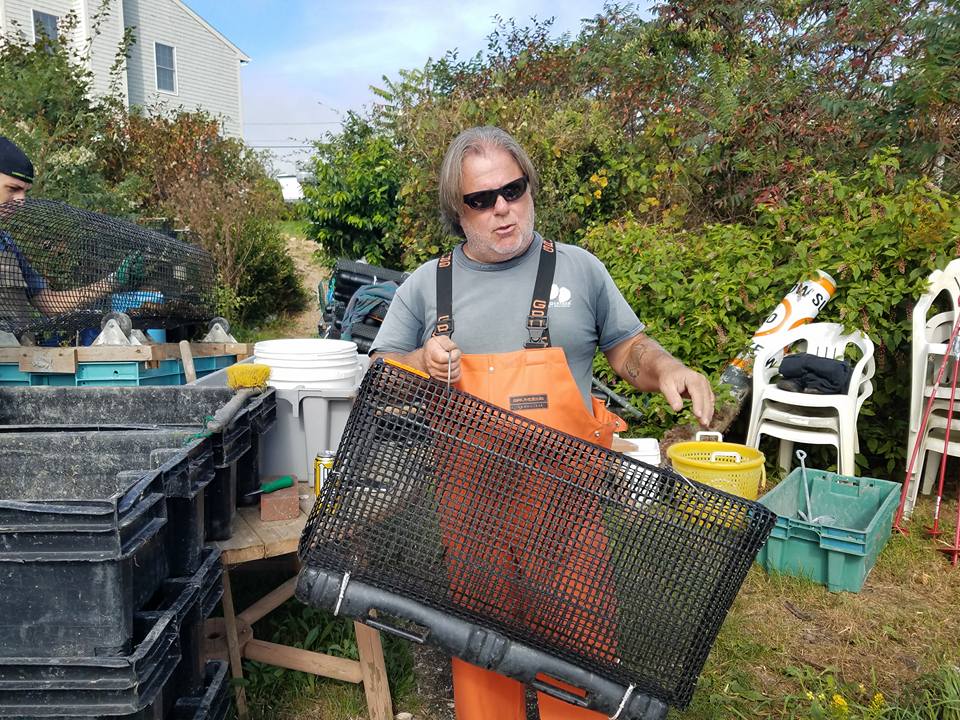 He says the oysters are “tide tumbled,” and the constant circular current and wake gives the shells a smooth appearance, like they’ve been rubbed with sandpaper. But when they’re out of the water, drying in the sun, it kills off harmful fouling organisms like tunicates. They have a nice cup and thicker shell because of the way they’re grown. “It’s a smaller sized oyster that’s packed with meat,” Cataldo says.

Gansett Points are top floaters grown in surface cages, so they are not knocking around as much. They sit within one foot of the surface and feed twenty-four hours a day, except when they are left out to dry for a day or two.

Chef Rich Silvia was first introduced to Bluff Hill Cove’s oysters three years ago by former Revolving Door and Chair 5 chef Basil Yu, who now works in Colorado. Silvia loved the oysters upon first taste, but getting them into his restaurant wasn’t as easy as expected.

“I was just starting out then and I didn’t have a lot of product,” Cataldo says. “I was taking care of George’s and Chair 5 and I was sweating to have enough to get them all the way through, and I didn’t want to take on another restaurant at the time.”

When Cataldo revealed to his wife that this specific Newport restaurant wanted to serve his product, and that he told them he didn’t have enough for them, she said “Are you out of your mind?”

Now Bluff Hill Cove oyster farm’s Winter Pearls and Gansett Points are White Horse Tavern’s exclusive year-round oysters. Silvia often comes down to the farm on days off and hand-selects the 200 to 300 oysters a week that they serve at the restaurant’s raw bar.

Today, he walks right into the water in his waders and a T-shirt emblazoned with the Bluff Hill Cove Oysters logo, shucker in hand, taste-testing the product straight from the cages. He appreciates the hard work that goes into oyster farming, as he once worked on a lobster boat. 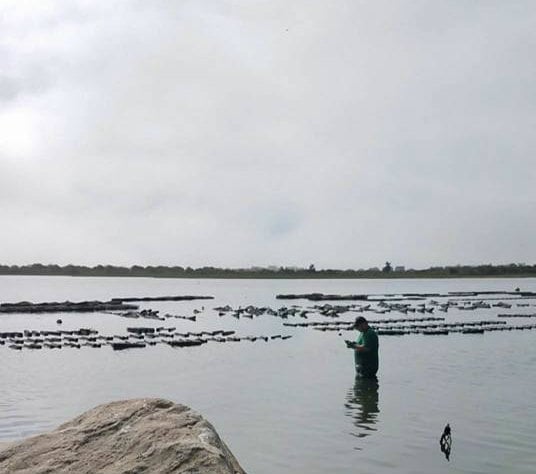 “If I didn’t do that, I wouldn’t be able to work as hard as I do as a chef,” says Silvia, who will be recognized as Chef of the Year by the Rhode Island Hospitality Association on November 29 at Twin River Casino. “Chefs work hard, but fishermen and people in the seafood industry work so much harder because they have to do so much more to earn what they do, especially now with regulations and pricing. It taught me a lot.”

That’s why he makes an effort to go out and see where the products he uses in the restaurant come from. “Real chefs play with their food,” he says. 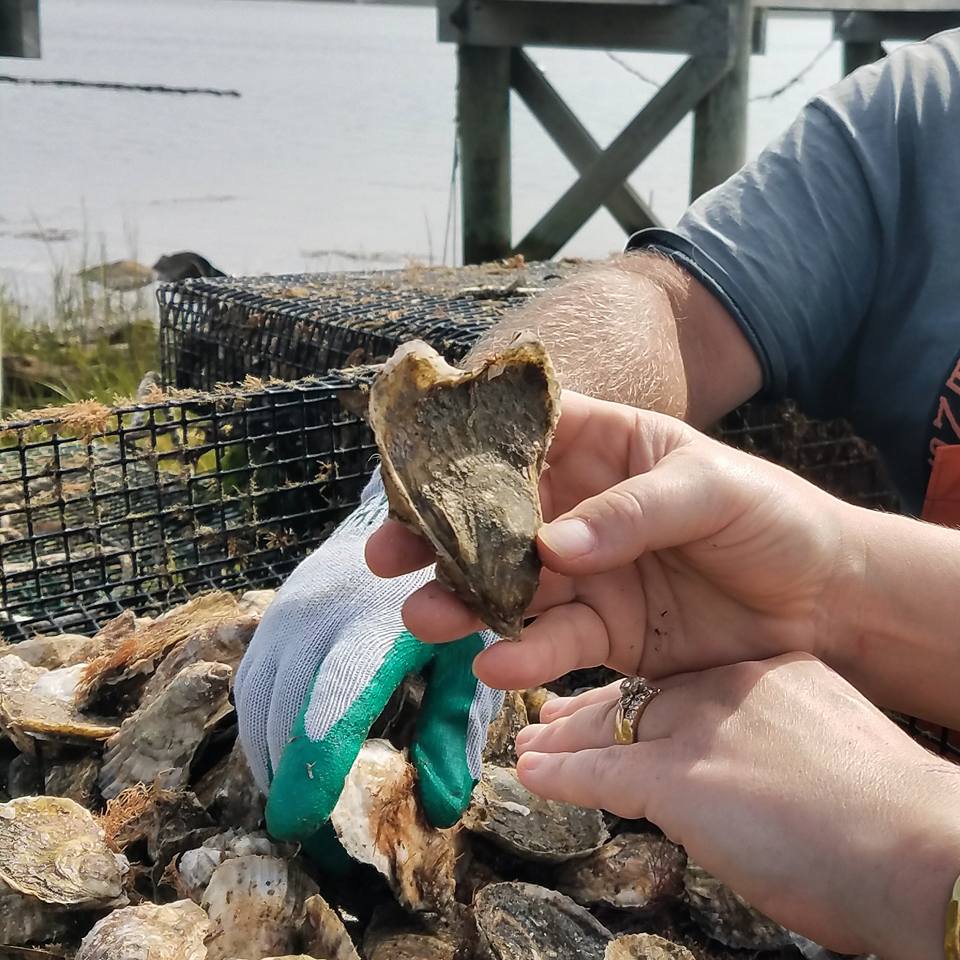