Day in the Life: Bounty of the Bay

A typical day on the job with a quahogger.

Each morning, dedicated groups of quahoggers leave from docks scattered throughout Narragansett Bay to dig up the natural and native bounty waiting to be harvested. Twenty-plus years ago, more than 2,000 commercial fishermen were quahoggers; this year there are 534 active licensed commercial quahoggers, and even fewer call it their full-time profession. Robert Russo, a twenty-six-year-old Bristol native, shares what it’s like to live the life of a Rhode Island quahogger.

Waking up by 5 a.m., Russo first checks the weather and tide charts on his phone to make the final decision on where he will be fishing for the day. As a self-employed commercial fisherman, he doesn’t have a boss to report to but depends on one very unreliable factor: the weather. Out the door between 5:30 and 6 a.m., Russo makes the fifteen-minute drive from Warwick to East Greenwich where his boat is docked. A quick stop at Cumbies for necessities – gas, coffee and a breakfast sandwich – is a must. Russo is usually alone on his daily fishing voyage, but occasionally he brings first-mate Jessie and cabin-mate Angel, his rescued hound dogs. “They know it’s getting windy and cold out there; Jessie loves the excitement, but Angel gets too nervous when the wind picks up,” Russo says. “They like to stay in bed during the cold months.” 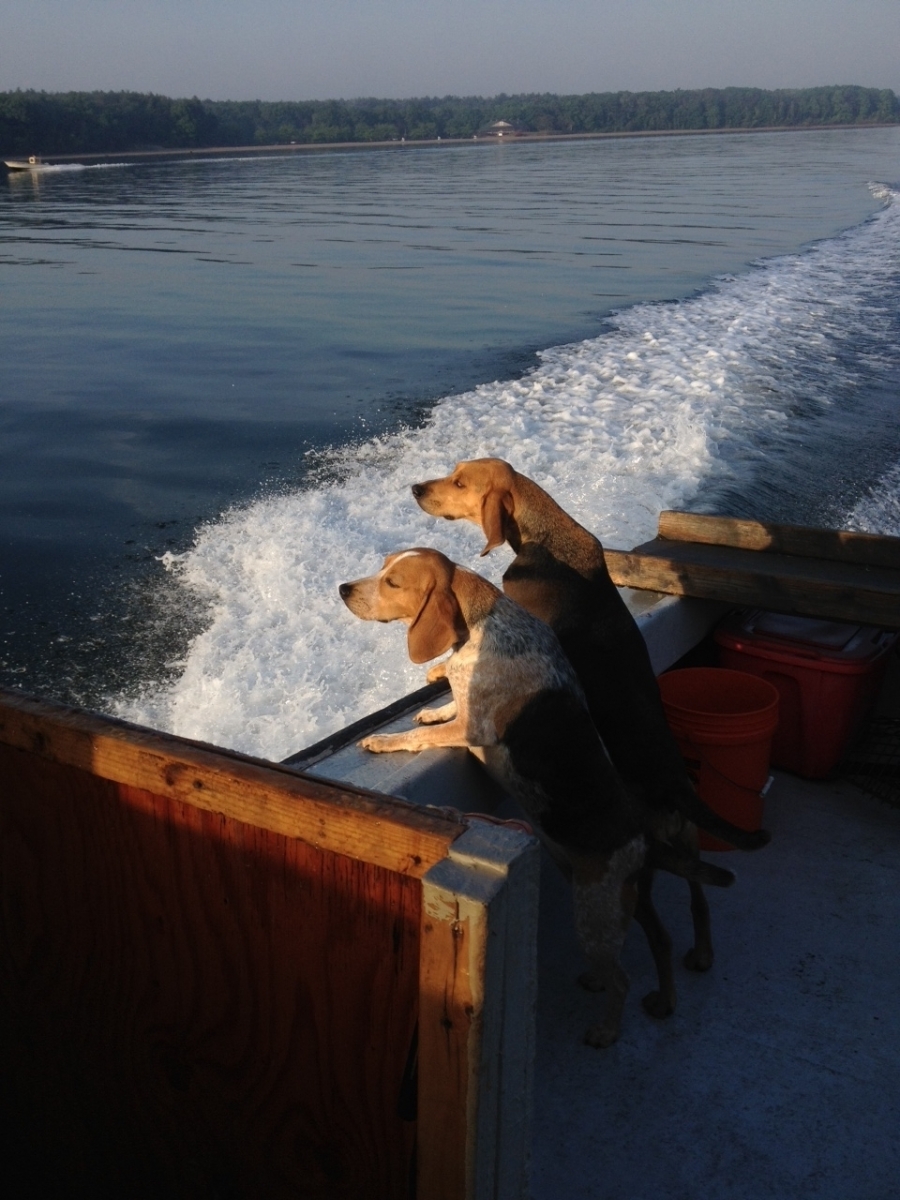 Russo heads down to his boat in Shanty Town, aptly named for the oyster shucking shanties that once stood along the cove; today only a handful remain as reminders of the past. Making his way down the dock, Russo reflects on the hard work that goes into being a commercial fisherman. He spent an entire summer rebuilding his current boat, a Wellcraft V-20. “It was a big project. I removed the deck, rebuilt the stringers, replaced the fuel tank, reconstructed the deck and then I built the cabin to be exactly what I wanted,” he says. “You won’t see another boat that looks like this one.”

He checks the boat’s fuel level, turns on the electronics, starts the outboard and prepares to make his way out onto the bay. While he enjoys the summer for the warm air, extended daylight and higher selling price, the emptiness of the cove, dotted with vacant moorings during the recreational “off season,” makes his trip out a little faster. Having already checked the weather – mainly focusing on the wind conditions – Russo departs for one of his many fishing spots. With the rising sun shining through his windows, occasionally blinding him, Russo says he is happy to be out in the natural elements instead of in an office where he feels confined.

Nature is working in Russo’s favor. He arrives at his spot, fastens his poles, attaches his rake and drops his setup off the boat. It comes to a soft thud on the bay’s floor. Digging the rake into the bottom, he can quickly gauge whether the conditions are just right by feeling the quahogs land in the basket of the rake as the mud clears. Each quahogger has his or her own method of digging off the boat, relying on chosen tools and personal strength. Success isn’t easily obtainable in this profession, but the accomplishment of harvesting and providing food from the bay is victory enough. As the five-gallon buckets fill with quahogs, Russo can easily determine the payoff he will receive at the end of his day. He separates his bounty by chowders – the larger quahog ideal for chowder and stuffies – paid for by the pound, and the smaller quahogs, including littlenecks – delicious steamed and commonly eaten raw on the half shell – paid for per piece. Russo says, “I try to gather 1,000 pieces or more a day. Around fifty pounds of chowders end up in the day’s catch – the more pieces the better.”

Around 2 p.m., Russo packs up his poles and rake, washes down the deck and rides back through the increasing bay chop, filling out his tags and bagging up his harvest for the day. Pulling up to the dock, he ties up and lugs the heavy mesh bags into the dealer where he sells out. Rollers separate smaller quahogs by littleneck, top neck and cherrystone for retail sale and the chowders are weighed on the scale. A check is cut and Russo walks away with a day’s pay, incomparable to the market price found in local retailers, but it’s a nice profit nonetheless. 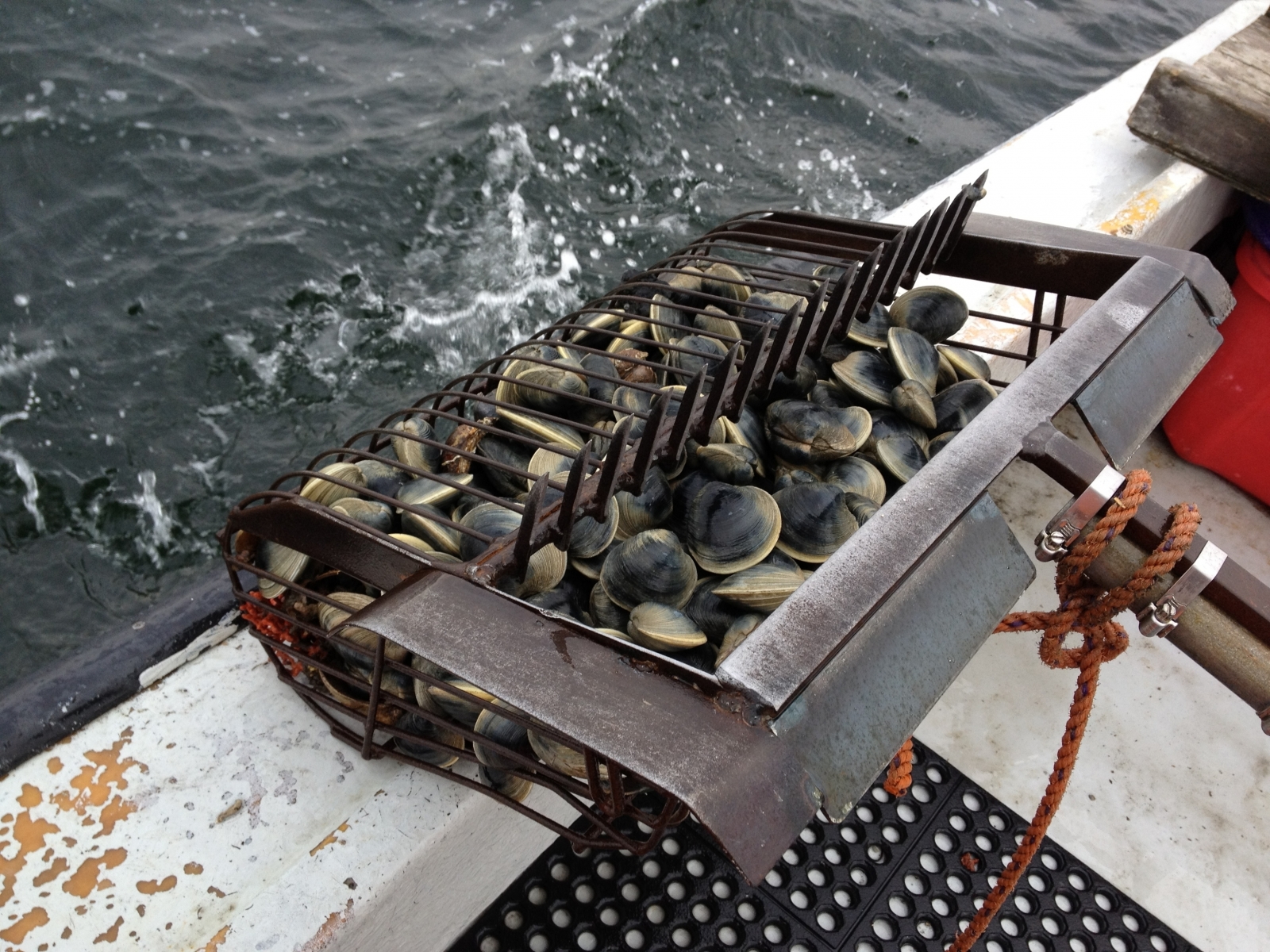 Russo has spent a large portion of his young life in the fishing industry. “I can remember being fifteen and getting paid more than what I’m paid now. Everyday expenses increase, but you’re making less and less while the price of everything you need to do your job is going up and up,” Russo says. “It’s embarrassing when I go into a place like Stop and Shop, where they are selling farm-raised littlenecks at eight to ten times the price of what I’m getting paid – for something natural that’s right in our backyard – when the dealers won’t even pay what the catch is really worth. It’s ridiculous.” Russo is paid on average fifteen cents per piece, but he has been paid as low as eight cents in the winter months and around twenty cents in the summer. The current cost of wild littlenecks at a local grocery store is 75 cents per piece and quahogs are ninety-nine cents to $1.49/pound (on average).

Driving the boat back to the main dock, Russo’s day is done – short of any necessary maintenance or helping the weather-aged old timers bring their bags up the dock. Russo is one of the youngsters in the quahogging industry, eager to listen and learn from those who have worked in this profession for forty-plus years. There is always something to learn in the fishing community.

Each day is a gamble for the quahogger. Some days working conditions are ideal, but other days, everything can go all ways but right. The silver lining is that this chosen job is loved by the people who go out nearly every day year-round – whether it is balmy with the perfect breeze or frigid and blowing a terrible winter gale. For Russo and those sharing his passion, the chance to work on the water is the epitome of the perfect day at the office.