The Twinkie Caramel Hard Shake mixes up vanilla vodka, vanilla ice cream and caramel sauce, topped off with a Twinkie. 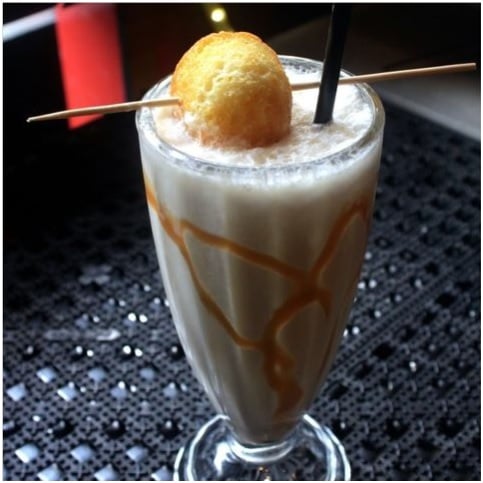 Harry’s Bar and Burger recently earned recognition for serving the craziest milkshake in Rhode Island by Cosmopolitan Magazine online. The article, by Carine Lavache of Cosmopolitan, highlights a milkshake in every state. But not just any ordinary flavor like the classic chocolate and vanilla, Lavache searched for the most out-of-this-world concoctions.

“Harry’s Bar and Burger in Providence, Rhode Island, may have been voted as having the best burger in America by CNN, but don’t forget to try the Twinkie Caramel Hard Shake,” Lavache writes on the website. The boozy beverage is for those who are twenty-one and older because it is spiked with alcohol.

The drink is made with Pinnacle vanilla vodka and vanilla ice cream, dribbled with caramel sauce on the side and topped off with none other than a Twinkie! To try the milkshake out for yourself, visit Harry’s Bar and Burger at one of the four locations in Lincoln, Newport, Federal Hill and on South Main Street in Providence. To read the full article, click here.

The Dish: 3 Spots for Bubble Tea