New trucks need to follow established rules and be courteous to restaurants and other trucks.

In the November issue of Rhode Island Monthly, I wrote a story called "Wheeling and Dealing," about the Providence food truck war between restaurants and mobile vendors and what it is like operate a food truck in Rhode Island (please purchase the magazine to read the story). Managers from Thayer Street businesses Better Burger Company and Paragon openly spoke with me about their disdain for the trucks, but the situation has really escalated over the last month.

Over the summer, I got to know several of the food trucks and heard their sides of the story, and restaurant owners voiced their opinions about the trucks. Their complaints focused on the issues of trucks taking parking spots meant for customers, and supposedly hijacking customers by loitering too close to their restaurants. They resent those trucks that park illegally at meters, just a few feet away from their establishments. And, according to Providence’s Code of Ordinances for Peddlers and Hawkers, it is illegal to park at those meters. Trucks like Rocket Fine Street Food, Mama Kim’s Korean barbecue and Mijos Tacos opt to park legally on side streets in spaces that have two-hour parking signs, which is perfectly legal as long as they stay for only  two hours. Customers walk a block or two away from Thayer Street to purposely patronize these trucks.

Some of the newest mobile vendors (@WhereisRadish, @CJammersTruck, @MootzaDeli) are learning the ways of the established food truck community. But last month, one of the newer trucks parked in what was considered by other food trucks to be an inappropriate spot. Recently, Rocket offered Radish some friendly advice, but Radish’s response was unexpectedly curt. 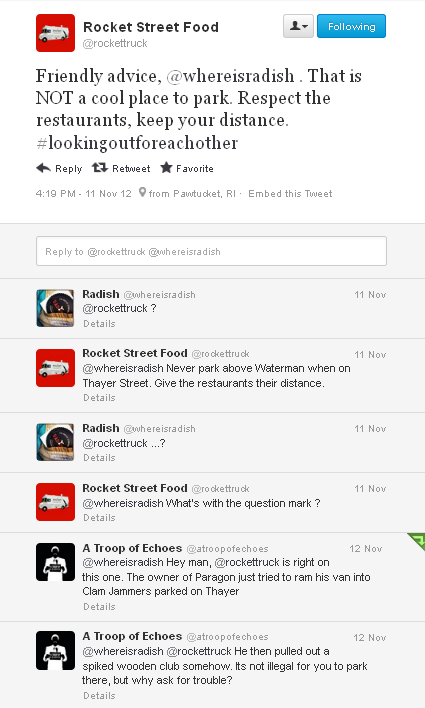 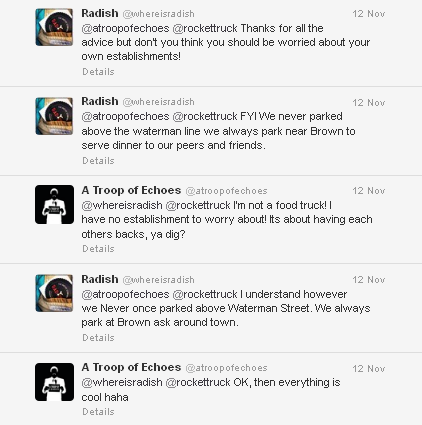 Since then, it appears the trucks have made up, as they’re and mentioning each other in tweets again. All is forgiven and forgotten. But it is very important for Providence’s new trucks, including those that have yet to begin business, to know the rules and to follow them, so that they do not ruin it for the other trucks that have been around for awhile. The owners of French bistro-on-wheels Plouf Plouf Gastronomie, Anik and Mario Molliere, have also reached out to Radish several times over Twitter, asking them to park legally.

Radish owner Timothy Silva is puzzled by Plouf Plouf’s tweets. “I’m not really sure why Plouf Plouf has tweeted us about parking,” Silva says in an email on Thursday afternoon. “He [Mario] is a great guy and it appears all the food trucks have been getting along. The vibrant food truck scene on Thayer is only going to continue to grow.”

Says Plouf Plouf's Anik Molliere in an email on Thursday evening: “Our concern is that if the regulations are not respected, the city will change them, and not in our favor. We need to coexist…Some trucks new to the Thayer/Brown vicinity have either not been notified, or are ignoring it. The food truck scene is regarded as a whole, and unprofessional behavior reflects poorly on all of us. Lots of cities have very prohibitive ordinances for mobile food vendors, and we don't want Providence to become one of them."

And Silva’s right, the scene is only going to continue to grow, what with Panino Express sandwich truck starting up very soon. It’s important that other new trucks learn from this situation. We know that parking at a meter is illegal for food trucks, and yet up until recently, Plouf Plouf did park in front of a meter on the corner of Waterman and Thayer, directly across the street from BBC. The restaurant’s manager, Natalia Foussekis, whose grandfather, Andrew Mitrelis, owns the restaurant and Paragon, emailed me this photo from over the summer. 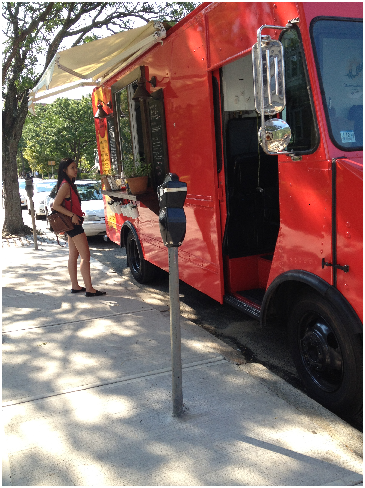 “I’ve complained to the cops a million times,” said Foussekis, back in August when I interviewed her for the Rhode Island Monthly story. “We pay high rent to be on this street, and they are parked right across the street. They catch students right when they come out of class. They probably have a better spot than we do.”

Since then, restaurants have flooded the police with phone calls about the trucks, which caused the police to politely ask Plouf Plouf to move from their usual post at the corner of Waterman at Thayer. Although Providence’s ordinance says food trucks are not allowed to park at meters, according to a source, the police and attendants hadn’t minded as long as the meters were fed with quarters.

“If it was legal, the police wouldn’t have had them move, and they did move,” said Foussekis in August. “And I know that if I was doing something that I knew was within the law, I wouldn’t move.”

It hasn’t been easy, says Anik Molliere. “But now it's gotten nearly impossible. You don't know what we have to go through just to get one legal parking spot near our customers each day.”

As for the alleged incident between Clam Jammers and the owner of Paragon mentioned in the above Twitter conversation, we are in the process of tracking down an offical police report. We will report back as soon as we can prove this incident occurred, and that the parties mentioned are factual.

The ongoing clash between Thayer Street restaurants and food trucks needs to stop. New trucks need to follow established rules and be courteous to restaurants and other trucks, and restaurants that are threatened by food trucks, and think they are losing customers because of them, need to step up their game and serve better food. The food trucks provide a necessary service to students, who are on the go, and need to eat quickly in between classes. They are not looking for sit-down meals.

"There are abundant advantages a restaurant has for its customers over a food truck – shelter, restrooms, seating, liquor, ability to function in all weather conditions, volume, staffing, ambiance, amenities, and on and on.. ,” says Anik Molliere. “We understand valid concerns of a restaurant in proximity to a food truck. However, an empty burger joint has nothing to do with a food truck hundreds of feet away selling French Cuisine at a higher price point. Or a Mexican truck, a Korean truck, a deli truck, or even an ice cream truck for that matter."

The Brown Daily Herald and the Blog Daily Herald have also done some fabulous reporting on the food trucks versus restaurants clash. For more information, please read their articles “Mean Trucks: Food truck feuds and unreplied tweets,” by BlogDailyHerald staff, and “Tensions arise as food truck community grows,” by Sophie Flynn (the comments are particularly interesting!).

And we would be remiss if we did not offer a potential solution to this problem. What if the Brown University community or the city of Providence could provide a designated area near Thayer Street for these trucks to pay rent, so that they could avoid parking difficulties and clashes with restaurants? Especially since Brown is going to be taking over a total of 250 more parking spots for leased parking as of January 1, 2013 (Olive Street between Thayer and Brown Streets) and July 1, 2013 (Brown Street between George and Charlesfield Streets and Benevolent Street between Brown and Magee Streets). A designated area for food trucks works brilliantly in Kennedy Plaza where they have guaranteed, conflict-free spots to park each day, and they pay rent for those spots. This could  also prevent them from taking parking spots from restaurants. It could be a win-win. Is it possible?