Cosentino had the chance to thank one of his mentors in the audience, legendary chef Jacques Pepin. 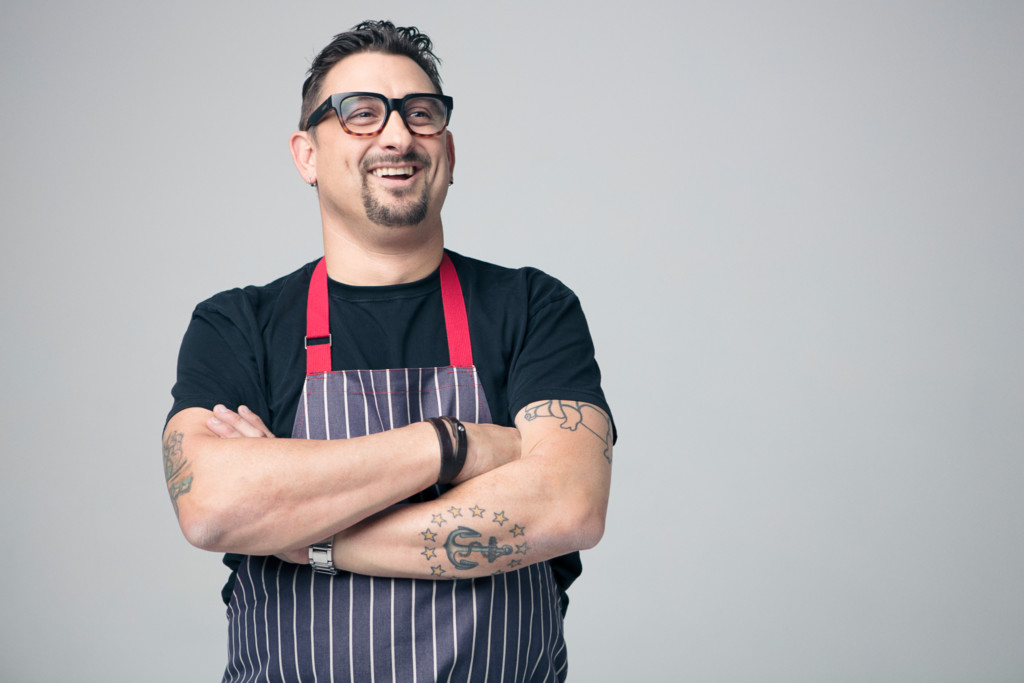 San Francisco chef and Johnson and Wales University alumnus Chris Cosentino (’94) had his homecoming yesterday at Johnson and Wales University’s Harborside campus as the 183rd distinguished visiting chef. It was his first visit back in more than eighteen years. The renowned chef is famous for  whole animal cooking, and he owns restaurants Cockscomb in San Francisco, Jackrabbit in Portland, Oregon, and Acacia House at Las Alcobas in Napa Valley. He is also chef and partner of Delicious MFG and C.O., and author of Offal Good, as well as the winner of “Top Chef Master” season four.

Cosentino gave a cooking demonstration to students in the JWU amphitheater, including recipes for tripe and a grilled cheese with duck egg, bitter honey and truffle. In between tips for tenderizing tripe, he also shared memories from his days at JWU and gave students career advice to achieve their goals. He didn’t sugarcoat his suggestions. And he was very generous with truffles.

He urged students to build their foundation and techniques before they even think about being on television, or even becoming a chef or sous chef. “We went through the school of hard knocks to get to where we want to be,” he says. “The road is long and bumpy, but if you are willing to put in the time, energy and effort, you will succeed. The only thing that’s stopping you from succeeding is you. Nothing else.” 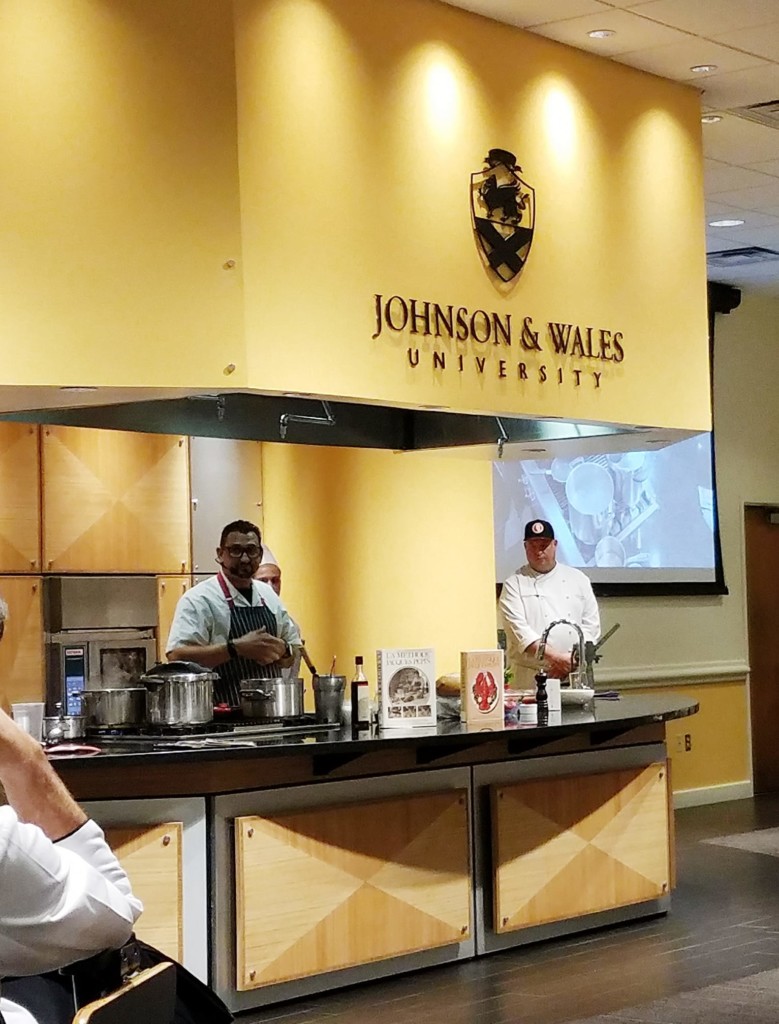 During the demonstration, Cosentino had the chance to thank one of his mentors, who was in the audience. Legendary chef Jacques Pepin sat in the front row at the amphitheater, and Cosentino explained how his dyslexia and ADD prevented him from being able to read traditional textbooks and cookbooks.

“In my school books, there was very small writing, lots of graphs, lots of charts, lots of numbers. 75 percent of it was backwards for me,” he says. “I struggled…I couldn’t process what was in the book. I kept trying to be prepared, but it was so difficult for me to translate what was in the book to what was going to happen in class.”

Cosentino said Jacques Pepin’s step-by-step books, La Technique and La Methode, that detail how to break down a chicken and fish using step-by-step illustrations, helped him become who he is today. Cosentino choked up on stage when explaining just what these books and Pepin’s influence meant to him.

“I had to learn how to deal with my broken brain,” Cosentino says. “If it wasn’t for chef, I wouldn’t be here now. I wouldn’t be who I am without these. I am sorry to become so emotional about it, but it was a powerful thing to figure out, when you were a kid who didn’t have guidance, who didn’t have help.”

He went on to explain how he grew up watching WGBH, learning from Pepin and Julia Child. “They were the originally food TV, not that shit you see now,” he says.

Cosentino demonstrated how he makes grilled cheese in his restaurant. It’s a distant departure from the grilled cheese he made with his brother after school using leftover cheese scraps. He piles a generous amount of taleggio cheese — end to end — and ample truffles on sourdough bread. Then he uses a cast iron pan and lots of butter to achieve even crispness, topping the grilled sandwich with a duck egg and drizzled bitter honey.  “We charge $18 for our grilled cheese at the restaurant,” Cosentino says. “When we opened, everyone was like, ‘What’s wrong with you? $18 for a grilled cheese? It’s bread and cheese!’ But we get to have a little fun.”

Cosentino urged students to work hard and to read as much as they can. “The thing you have to remember is that no matter if it’s the simplest thing, a grilled cheese, or the most humble thing, like tripe, it’s all or nothing,” he says. “Give it everything. Make it the best. It doesn’t matter if you are working at Frosty Freez and you are pulling that machine for the best soft-serve. Make the best swirl. We’re giving taste memories. That’s our life.”