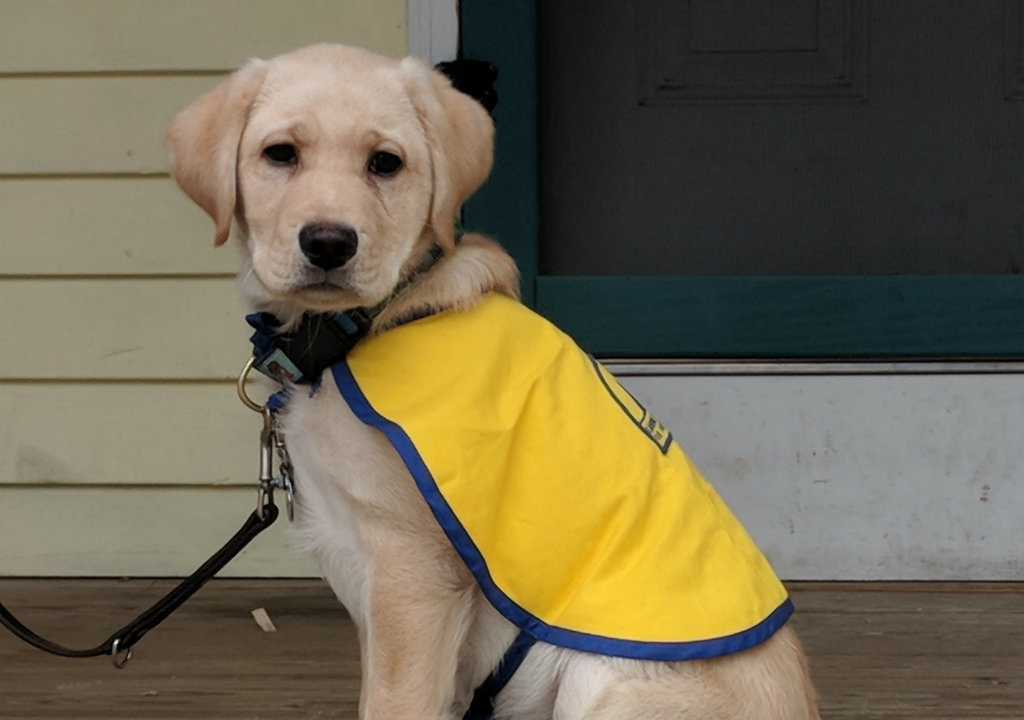 Canine Companions for Independence is a nonprofit organization that enhances the lives of children, adults and veterans who have disabilities by providing them with highly trained assistance dogs. As a puppy, each dog is adopted by volunteer puppy raisers who take the pups into their home, raise them and teach them basic commands and socialization skills.

Pam Jones, a Warwick resident and second time puppy raiser, heard about Canine Companions through a mutual friend who worked with the company and decided to become a volunteer herself. She is currently training three-month-old Ellis, a yellow Labrador retriever, and she brings him to work with her at Roger Williams Park Zoo. Pam will work with Ellis for a year and a half until November 2019 in order to teach him proper service dog skills.

What does an average day look like for you and Ellis?

Our day is mostly about establishing a routine and making sure I set good parameters for him on how to behave. He goes to work with me in the morning and he spends some time in the crate at the office. This teaches him how to be around people but to not be the center of attention of everyone in the room. Later on he is able to hang around the office behind a puppy gate for more time to socialize with the other people who work there.

Will Ellis have the chance to socialize with the general public?

[He] will be able to socialize more with the public as he gets older and has had more training. I wouldn’t take him to a busy store or restaurant right away – you have to start small and build the socialization up. When he is about nine or ten months I will be able to introduce him to more.

What about the public at RWP Zoo?

Well at first I don’t want anyone to pet him, as it is important for Ellis to not beg for attention with the people he meets, especially young children who may run up to him. However, bringing him to the zoo will be a great opportunity to talk to the general public about what assistance dogs do and how to react around them. Eventually Ellis will be incorporated into more programs on the zoo grounds, but it is important for him to still keep focus. This type of environment allows for controlled interaction.

What is the final goal of Ellis’s training? Will he be placed with someone?

My final goal is to hand in a well socialized and well-behaved puppy to Canine Companions. Then they begin six months of professional training with the company where they learn even more. They decide on what track to take or what the dog’s placements will be. The personality of the dog and the personality of a person they pair them with should match.

But isn’t it hard for you to give Ellis back to them? Do you grow a personal attachment?

Hugely. I have a personal attachment to them because you raise them and love them for a year and half. It is different than a dog that is your pet because you spend so much time with them. But this is the end goal all along. They have this amazing life ahead of them. My first puppy, Vector, had a spring in his step and was wagging his tail when I brought him back. He was ready to take on anything and that is a job well done. 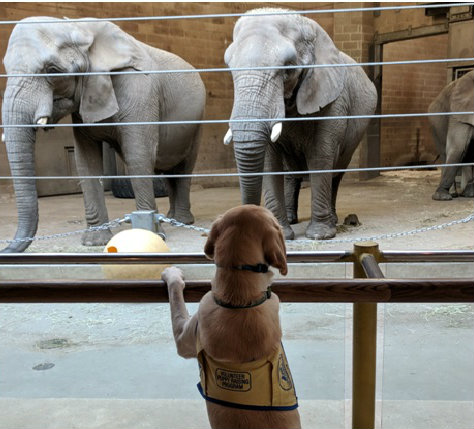 Canine Companions for Independence has exceedingly high standards for each pup. Only about five out of ten dogs actually make it through the full program, so the ones that graduate are truly the cream of the crop. As Vector is at the very end of his training and will be paired with someone very soon, it is no surprise that Ellis is on his way to becoming a stellar service pup, too.

To learn more about Canine Companions for Independence or how to get involved, click here.