18 Places to BYOB (Bring Your Own Booze) in Rhode Island

Pick up your favorite bottle or brew and cheers to these places that let you bring your own booze.

1096 Park Ave., Cranston, 383-8071, minhhairestaurant.com
The Menu: Tripe, tendon, fish sauce, spice: Minh Hai’s menu is authentic and doesn’t waver against trembling Western palates. Big bowls of steaming, spiced pho (pronounced “fuh”) are served with a verdant plate of crunchy bean sprouts, licorice-y Thai basil, sliced jalapenos and halved limes to scatter, squirt and stir into your soup.
Vibe: Plain decor, all kinds of people. Girls from the local high school sip bubble tea while a group of Asian men with tattoos on their arms and faces huddle in the corner. While the atmosphere is demure, it’s also welcoming, with owner Minh, and his wife, Jennifer, warmly serving everyone with reverence.
Get: The Vietnamese eggrolls. Crunchy, stuffed with ground chicken, shrimp, imitation crab, mushrooms, onion, cilantro and vermicelli, then dunked into a fish sauce-based dip, these little buggers are so addictive that you’ll be wielding your chopsticks like weapons in an effort to defend them from your tablemate. Order two portions and there will be no need to duke it out for the last one. For a main, definitely get the pho, and if you’re feeling brave, try it with the tendon and tripe.
Wash It Down: Like other bold, flavor-packed spicy foods, Vietnamese pairs well with a nice white wine, but our inclination is to haul in a six-pack of something slightly malty — perhaps a brown ale. The nuttiness and sweetness of a malty beer highlights the star anise often used in pho, and doesn’t blow your palate out of the water (the food will be doing that, you don’t need any juicy IPAs to put your mouth into overdrive). For an old standard, you can’t go wrong with Newcastle. For a homegrown brew that packs a little more punch, try Revival’s Mercy Brown Imperial Ale.
Corkage Fee: None.
Closest Liquor Store: Park Wine and Spirits, 1294 Park Ave., Cranston, 943-2040, parkwineandspirits.com.
Dinner for Two: $30−$40.
Fine Print: It was cash only the night we went (the cash register was broken), so packing a small wad of bills couldn’t hurt.
–Grace Kelly

12 Broadway, Newport, 619-3799, bingebbqri.com
The Menu: Walk up to the counter and try your best to decide under pressure which barbecue specialties to feast on from the overhead menu. You’ll be tempted to order everything, from the smoked-onsite-daily beef brisket, pulled pork and spare ribs to hearty sides like crisp and gooey mac and cheese croquets, baked beans, flaky buttermilk biscuits with maple butter, smoked pork belly and slaw (because, okay, you should probably have some vegetables).
Vibe: The super-casual setting at Binge features counter service, takeout and local delivery. Bring your own cooler stocked with beers or grab a water or soda when you order, and they’ll bring heaping trays out to you when the food’s ready. It’s a sparse dining room with big and small tables, stools and giant rolls of paper towels and wet towelettes on each one to keep your fingers neat and tidy.
Get: The beef brisket is probably the best we’ve had north of the South. The beef boasts a nice char on the outside without an overly fatty exterior, and it cuts like filet mignon. The ribs are barbecue spare ribs, so go ahead and gnaw off the bone like the animal you are. Order a flotilla of side dishes and be prepared to go home with a bulging belly. Stuff your face; after all, it’s called Binge for a reason.
Wash It Down: Barbecue can hold its own against hoppy craft beers. Pick up some local brews at one of Newport’s breweries, Newport Storm or Ragged Island. Ragged’s Baulston porter pairs well with smoky flavors, and the bitterness of IPAs amplifies the salty umami tastes of barbecue while the caramel finish brings out the brown sugars in barbecue sauce.
Corkage Fee: None.
Closest Liquor Store: Island Wine and Spirits, 289 Broadway, Newport, 847-2641, islandwineri.com
Dinner for Two: $30−$40 (we went a little crazy with the sides, because it’s necessary!)
Fine Print: It’s kid-friendly, but they only have one clip-on high chair, and you have to ask for it, so BYO highchair or just deal with a baby in your lap.
–Jamie Coelho 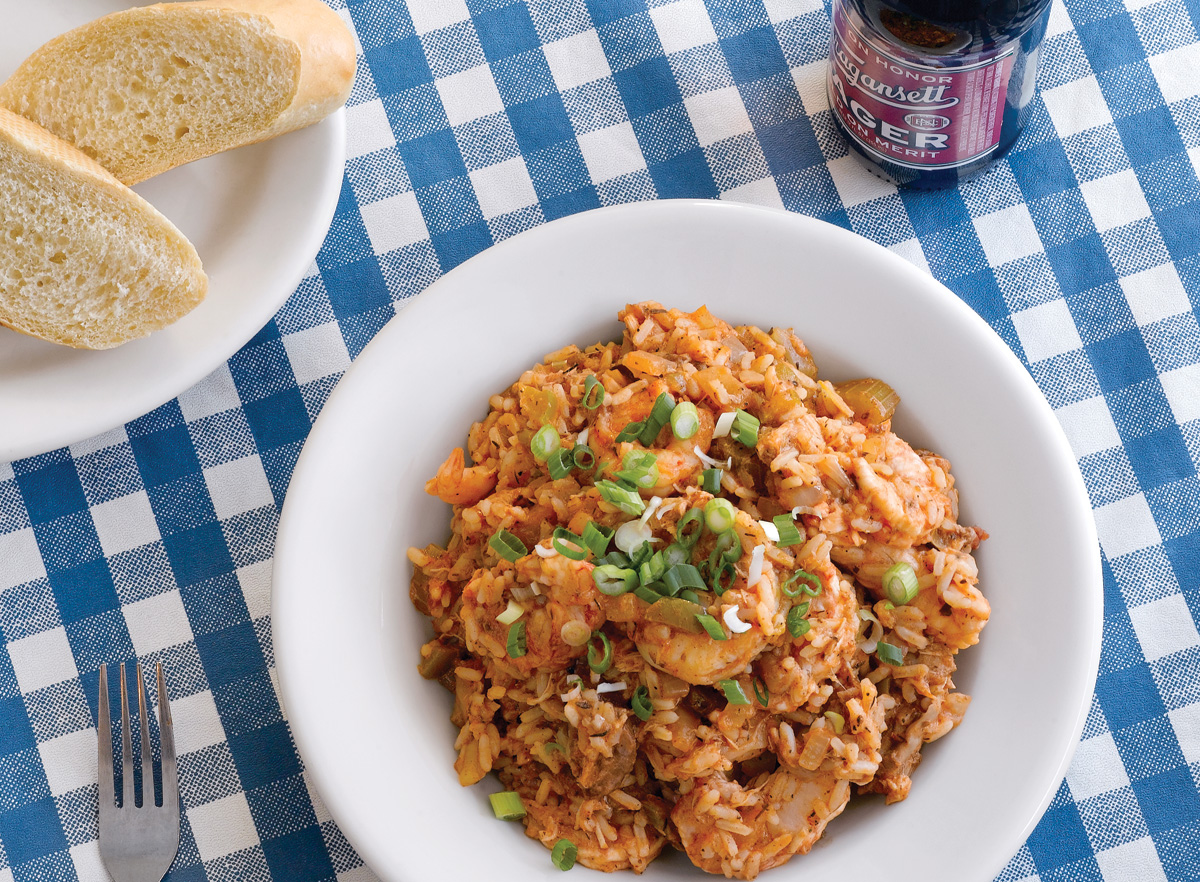 554 Kingstown Rd., Wakefield, 792-8940, bluebirdcaferi.com
The Menu: A Bluebird dinner comes but once a week, on Friday nights from 5 to 8:30 p.m. Menu items are inspired by the owner’s first Bluebird Cafe in New Orleans — think: jambalaya, fried catfish, shrimp po’boys and other Creole dishes. The daytime menu is also available, if you’d prefer pancakes or huevos rancheros for dinner.
Vibe: A breakfast and lunch spot, Bluebird’s Friday night dinner feels a little like a high school dance. Twilight casts a sweet romance on this familiar, utilitarian place. The lights are dimmed, the service is extra friendly and the mood is intimate. The checkered diner tablecloths only add to the sense that you’re experiencing something special. But don’t be afraid to bring the kids. The diverse menu and quick service make for a painless — dare we say, pleasant! — night out with the family.
Get: Anything NOLA-inspired. If soup’s on the menu — whether it’s crabmeat or West African ground nut — order it up front. The tasty New Orleans fried catfish fillet, breaded in pearly meal, will resonate with johnnycake lovers. The seasoned fries are a fine accompaniment to the catfish — or, heck, to waffles. You can’t go wrong with spicy fries. For a healthier option, choose the pecan-crusted chicken breast with Creole mustard and baked rice.
Wash It Down: A dry Reisling or sparkling wine offers a nice palate cleanser between fried bites. A sixer of ’Gansett will do, too.
Corkage Fee: None.
Closest Liquor Store: Wakefield Liquors, 667 Kingstown Rd., Wakefield, 783-4555, wakefieldliquors.com
Dinner for Two: $40 with tip.
Fine Print: Check the Facebook page on Friday mornings for the dinner menu, which changes every week. We’ve taken to planning our next Bluebird outing around the dessert of the week. We’re coming for you, flourless chocolate torte. And pecan pie. And key lime pie.
–Casey Nilsson 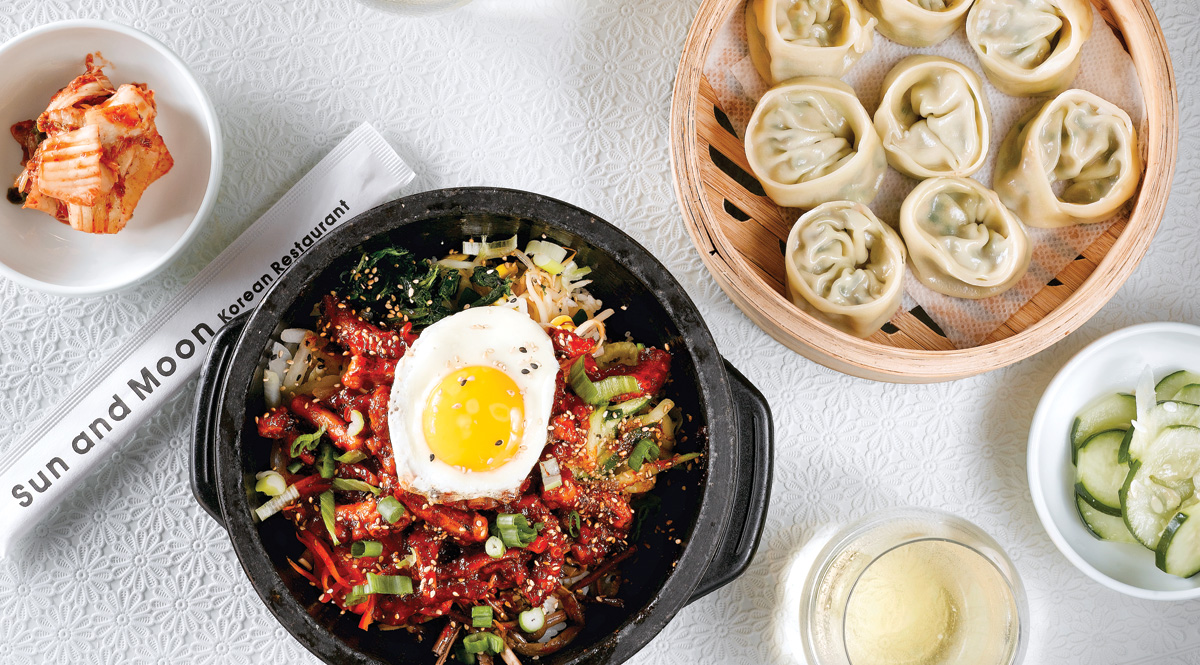 Sun and Moon bibimbap with dumplings. Photography by Angel Tucker.

95 Warren Ave., East Providence,435-0214, sunandmoonkorean.com
The Menu: One taste of Sun and Moon’s Korean specialties and you’ll never order Americanized Asian food again. Okay, maybe not, but really, you can’t beat bibimbap’s crispy rice with your choice of meat and six kinds of vegetables melded into spicy house-made sauce, cooked in a hot stone pot, and topped with a runny egg. For us, it’s bibimbap or bust.
Vibe: Walk past the front counter on your way to the dining room, and you’ll see chef Lee, the “mother of the family,” chopping vegetables for Korean dishes. There’s a main dining room with smaller tables and a separate area with a large table that can host families and groups. The room is decorated with Korean flags and mementos and the vibe is as authentic as you can get with dishes of various Korean condiments that may include kimchi, bean sprouts and pickled cucumbers, served at the start of every meal.
Get: Share the steamed vegetable dumplings stuffed with bean protein and vegetables and served in a bamboo steamer basket. The wings are a can’t-miss dish, slathered in sweet and spicy garlic sauce and topped with chopped peanuts. As for entrees, bibimbap is a must, but the beef bulgogi, Korean short ribs and sweet potato noodles (with chicken, tofu or jumbo shrimp) are all signature dishes.
Wash It Down: Sun and Moon has a selection of sakes, Korean soju (similar to sake) and beers and house wines for purchase, but they invite diners to BYOB on Tuesday and Wednesday evenings only.
Corkage Fee: $3 for beer for the table and $5 for each wine bottle.
Closest Liquor Store: Jordan’s Liquors, 199 Taunton Ave., East Providence, 434-0146, jordansliquors.com
Dinner for Two: Under $50, or more, depending on how much you can restrain yourself from ordering everything.
Fine Print: For BYOB, you can bring in wine or beer on Tuesdays and Wednesdays only. Sake is off-limits since they sell it here. We tried to sneak in a bottle of soju, but the owner kindly told us wine and beer only.
–Jamie Coelho