Building Community through Beer with BrewGene

John Muggeridge celebrated his sixtieth birthday at the Guild with his 1,000th beer logged in his beer tracking app. 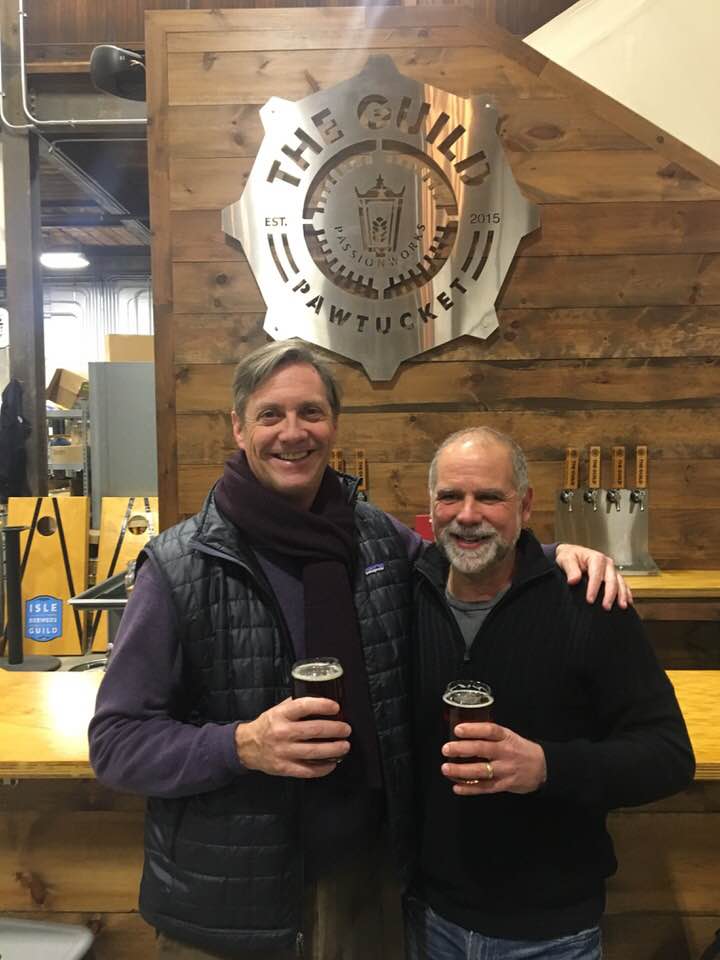 John Muggeridge achieved his beer quest to try 1,000 beers by his sixtieth birthday. It all started when he and his godson Connor Tyrell, created a beer tracking app called BrewGene a few years ago, and Muggeridge decided to use it to reach his goal. The app helps craft beer fans keep track of beers they like by building a cellar of brews they’ve tried and rated within the app.

Last month, Muggeridge celebrated his sixtieth birthday with his 1,000th beer at the Guild in Pawtucket. The brewers made a special beer just for him, Muggtoberfest, to ring in the occasion. Muggeridge said the most notable reward was the community he built along the way. “Facebook and social media seemed to have become a divisive thing, but this journey has done the opposite, and brought people together,” he says.

Here’s more about Muggeridge’s journey to 1,000.

What made you want to start on this beer quest in the first place?

Me and my godson, Connor Tyrell, designed a beer app, BrewGene. He had a goal of hitting 1,000 different beers by his thirtieth birthday, so when he got close, my wife and I went to his apartment and we got him to 1,000. When I looked at my own cellar in the app, at the time, I was at 596 or something. He got me to 600 that night, and that was two years ago. I was going to be fifty-eight, and I decided I would try to get myself to 1,000 by my sixtieth birthday to make the birthday less painful. That gave me two years to do it.

How can the general public use your app, BrewGene?

It’s a free download. When you have a beer, it allows you to assign it a rating based on how much you like it. We don’t get into hoppiness. It’s more about, do you like it, and how much do you like it? Once you rate it, that goes into your Beer Cellar, so you can recall it. We have more than 250,000 beers in the database at the moment, and about 200,000 users. Anyone can use it. All we ask for is an email address. The app itself can make predictions based on your profile. It can help you when you’re in a store trying to figure out what you might like.

Will it automatically recommend beers that fit your flavor preferences?

It can do that. It can give you the number of stars as to how much you might like it. It can tell you if you’ve had it before and how much you liked it. Sometimes, you go out and get a flight, and the next day, you might not remember what you liked or didn’t like and what it was called. Now you can put it in the system, so when you are out buying beer at a liquor store or at a bar, you can find the beers you enjoyed and avoid the ones you really didn’t like. There’s nothing worse than spending ten bucks on a beer and finding out you don’t care for it.

Do you take photos of the beers too?

If you look up a beer on the app, there will generally be a photo of the beer pre-loaded in the system. During my journey, I realized who I was drinking with was more important than what I was drinking. So I started taking photos with the people or person I was with and the beer, and I posted those photos to my Facebook page. For the last 200 beers, I have photos with the people that joined me. They were used in a slide show at the party. Everyone that has been a part of the journey, the last few hundred, was there in some shape or form, at least visually as part of the slide show. It developed from a goal to a journey, and along the way, it’s been interesting. My mom is in a bunch of photos and she died in November. She’s part of this whole thing, and she’ was a part of my sixtieth birthday party.

Who else did you have beers with?

It’s been interesting. I had a beer with the governor, Senator Jack Reed and Pawtucket Mayor Don Grebien. I’ve got this collection of a weird mashup of my life: college buddies, people I used to work with, people from the community. I was a public affairs guy at Fidelity for twenty years. People were eager to become a part of this thing as it developed momentum. People made time to get together and have a beer. There’s this whole community building element to it that evolved. You wouldn’t normally take the time to sit and shoot the breeze with someone, but when you are having a beer, that’s what you do. 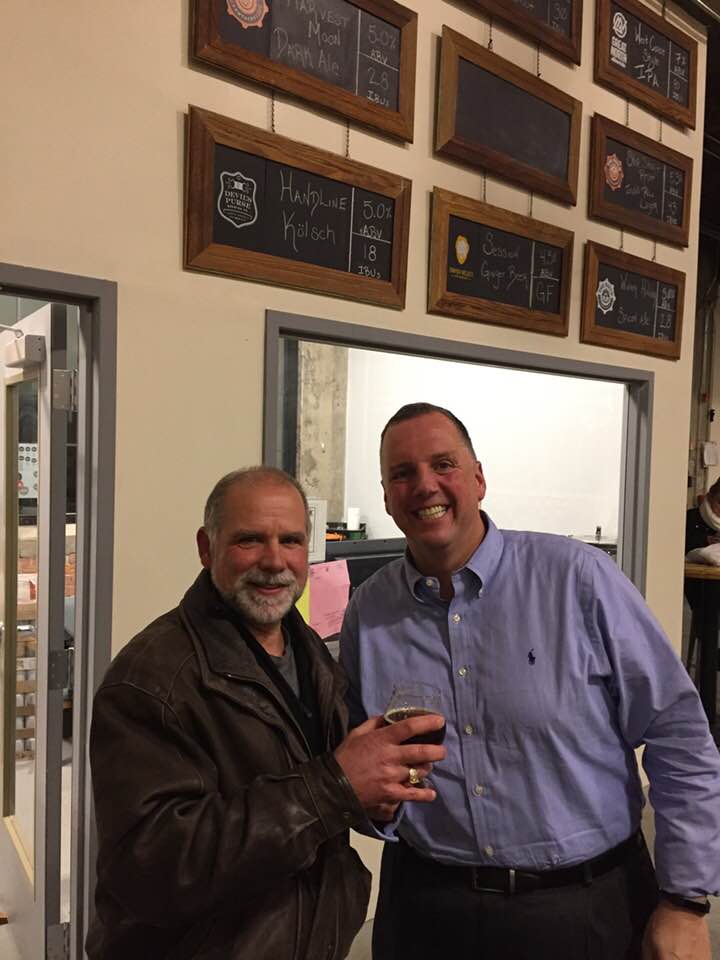 John Muggeridge having a beer with Don Grebien.

And people can embark on their own beer journeys by using BrewGene?

If people want to play along, it’s easy to do. Just download the app. As you rate a beer, you put it in your Beer Cellar and it builds up. You can set your own goals and use it to document elements of your life and invite others on the journey with you. Find new bars around the state and have fun.

What’s your favorite local beer and what cool places did you visit?

My top Rhode Island beer is brewed at Trinity. It’s called the Milkman, and it’s a milk stout. I tend to like stouts and porters and heavier beers. I am not an IPA guy. Even though the world is moving in that direction, I just don’t care for them. There are interesting places where you can get good beer around Rhode Island. The Guild is a cool place. I love the Avery, Bayberry, the Eddy, Malted Barley has a nice selection, and the place that used to be Doherty’s in Pawtucket. I make the rounds.

What was the biggest thing that came out of your journey?

The whole community building element of this is what surprised me. Facebook and social media seemed to have become a divisive thing, but this journey has done the opposite, and brought people together. There’s a relationship between beer and community and that’s important. 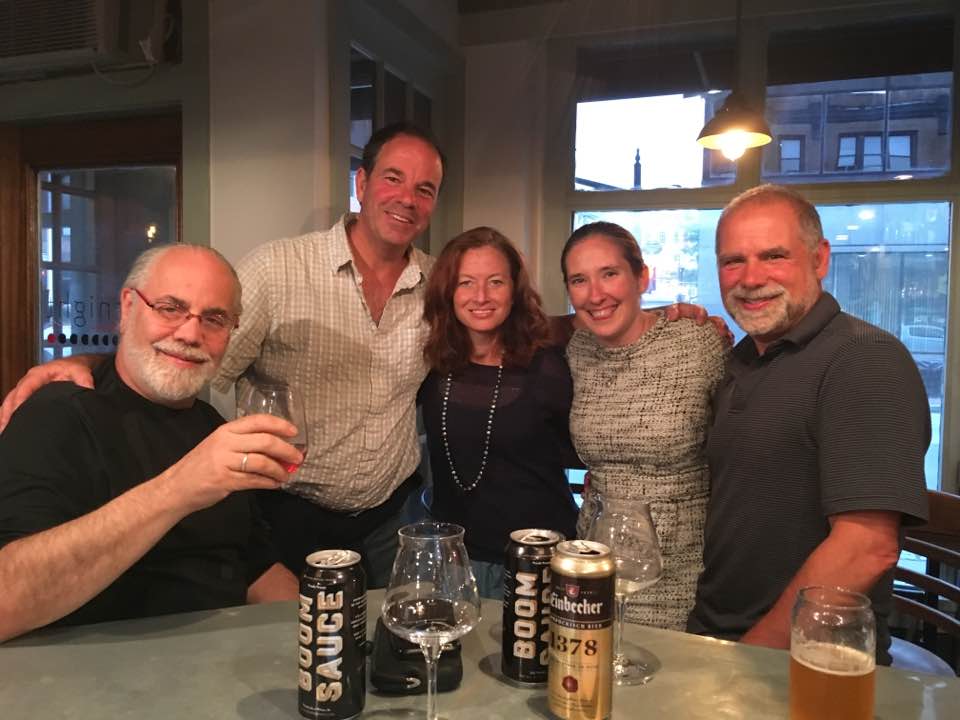 John Muggeridge having beers with friends at Fortnight in Providence.