Exterior details include a river rock deck and chimney. Inside, nautical touches abound. 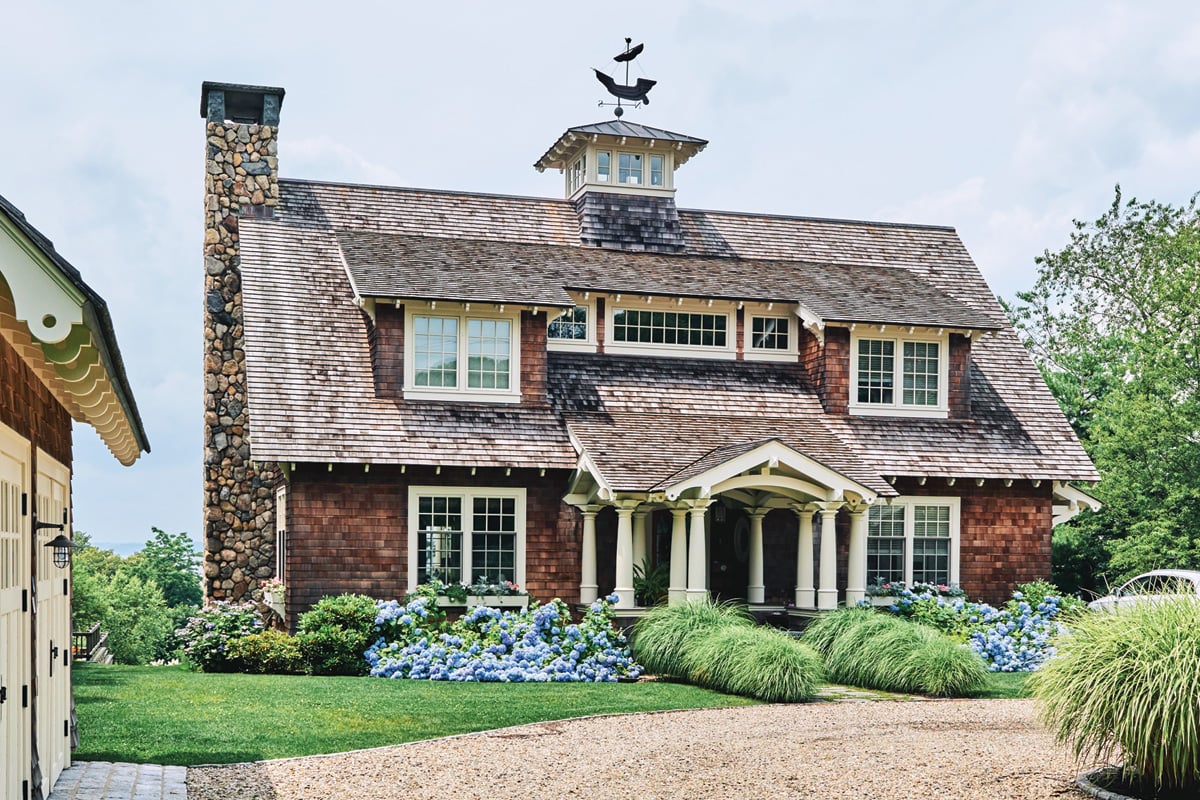 It’s often said that the devil is in the details, but when it came to constructing this Bristol bungalow where no aspect was an afterthought, architect David Andreozzi was more than happy to oblige. “The homeowners were really focused on the artistry that would go into the house,” Andreozzi says of Charlie and Maria Milot. “They wanted to spend money on the little details that matter rather than anything ostentatious. Those aren’t things you look at and say, ‘Wow that’s an expensive house,’ but they are probably the most expensive things you can do to a house.” Together, the Milots and Andreozzi designed a structure that fits right in with the neighborhood — a former summer colony with many remaining cottages — and exudes a warm, Nantucket-like vibe that starts at the circular drive and continues throughout. Still, plenty sets this home apart, including the custom river rock masonry, wood roof with low-hanging eaves and the cupola with weathervane that Andreozzi calls “the cherry on top.” The owners dubbed it Pen Marc’h after the town in Brittany, France, where Charlie spent summers growing up. 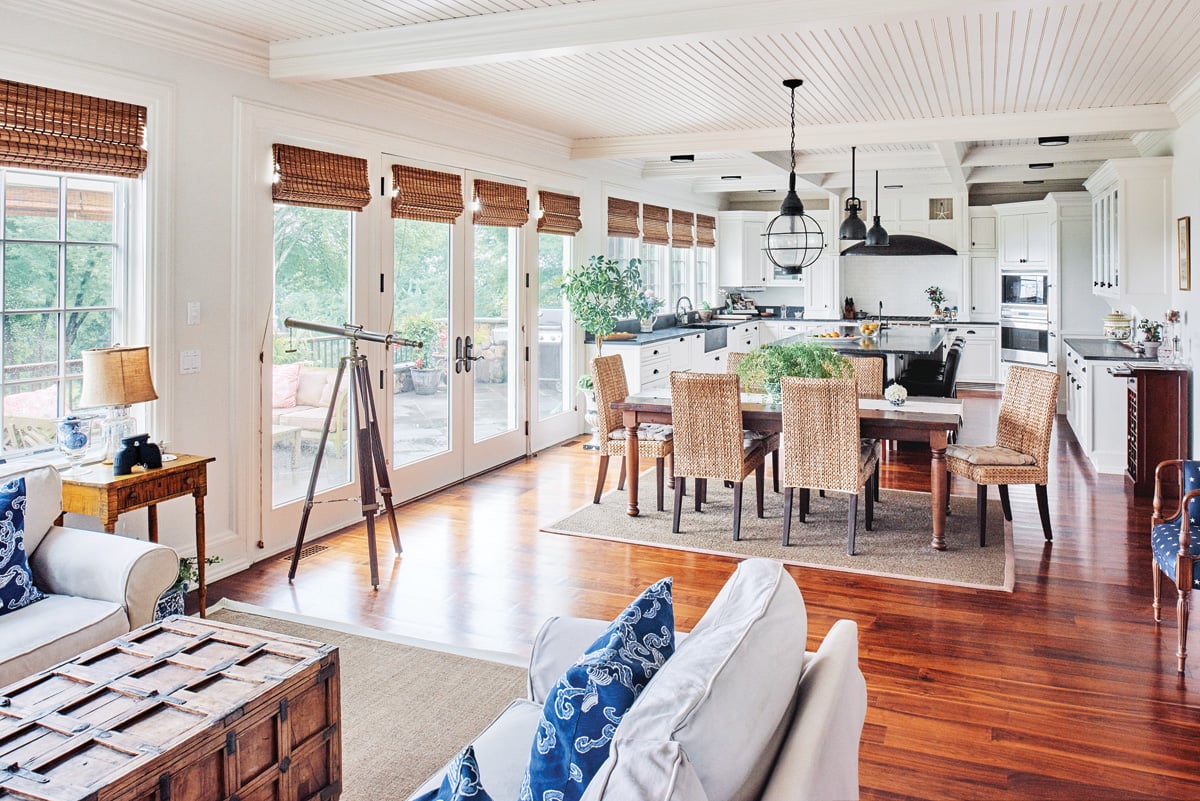 The open-concept living space allows for lots of entertaining, while the beadboard ceiling and nautical lighting strategically split the room into three distinct areas. Photography by Tony Luong.

Inside, Andreozzi mixed traditional and contemporary elements rather than letting the exterior call all the shots. “It is possible to be modern and also respect history,” Andreozzi says. That blending of styles appears prominently on the main floor, where most of the square footage is occupied by the open concept kitchen-dining-living space. Andreozzi and his senior associate, David Rizzolo, gave the traditional beadboard ceilings a current spin by using a mix of patterns to delineate the room’s three distinct functions. The architects worked closely with the Milots, who love to entertain, to create a kitchen that could accommodate both their lifestyle and love of craftsmanship, installing durable soapstone counters, custom cabinetry that includes pull-out spice racks on either side of the range, a hammered metal hood made by Tiverton’s Metal Works and a generously sized island. “The kitchen layout works so well for us because it allows guests and family to congregate and communicate with us, yet not encroach on us, as we cook,” Maria says. Wall-to-wall windows showcase the views of the expansive lawn and bay beyond. Outside, the deck, which is large enough for sitting and dining areas, as well as a built-in cooking area and container garden, gets plenty of use in warmer months. Bluestone, rather than wood, was selected to blend with the deck’s rock-laden base. A pergola, with custom fiberglass columns made by Warren’s Beacon Boats, helps shield the west-facing platform from the afternoon sun. 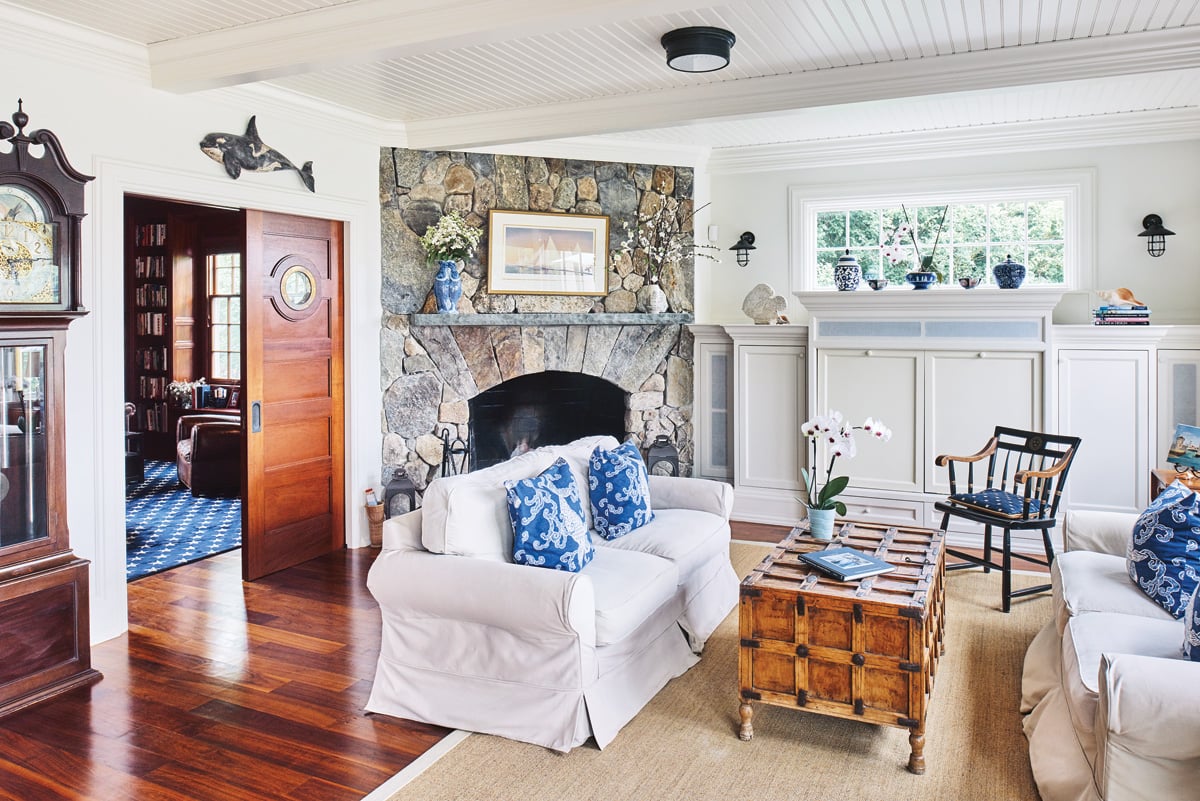 It should come as no surprise that the Milots were on board with anything that placed quality over quantity in their custom home. Charlie, after all, owns several construction-related businesses. He knows finishes well and that expertise shows throughout Pen Marc’h. Take, for instance, the built-ins at the far end of the main living space, opposite the kitchen. More than simply storage, they conceal the television when the room calls for a more formal feel. Adjacent to the cabinetry, the fireplace, made from the same stone as the house’s foundation, was thoughtfully angled so that it wouldn’t distract from the water views. The library is another testament to Charlie’s knowledge of materials, as well as his desire to have a space in the house to call his own. An avid sailor, his design choices were heavily influenced by his favorite past time. “He basically said: ‘I want to feel like I’m on a boat,’ ” Andreozzi says. Mahogany panels and bookshelves, the soapstone hearth and brass lighting bring a warmth and masculinity to the room, while pocket doors with deadlights constructed by Charlie’s company, Atlantic Millwork, drive home the nautical aesthetic. 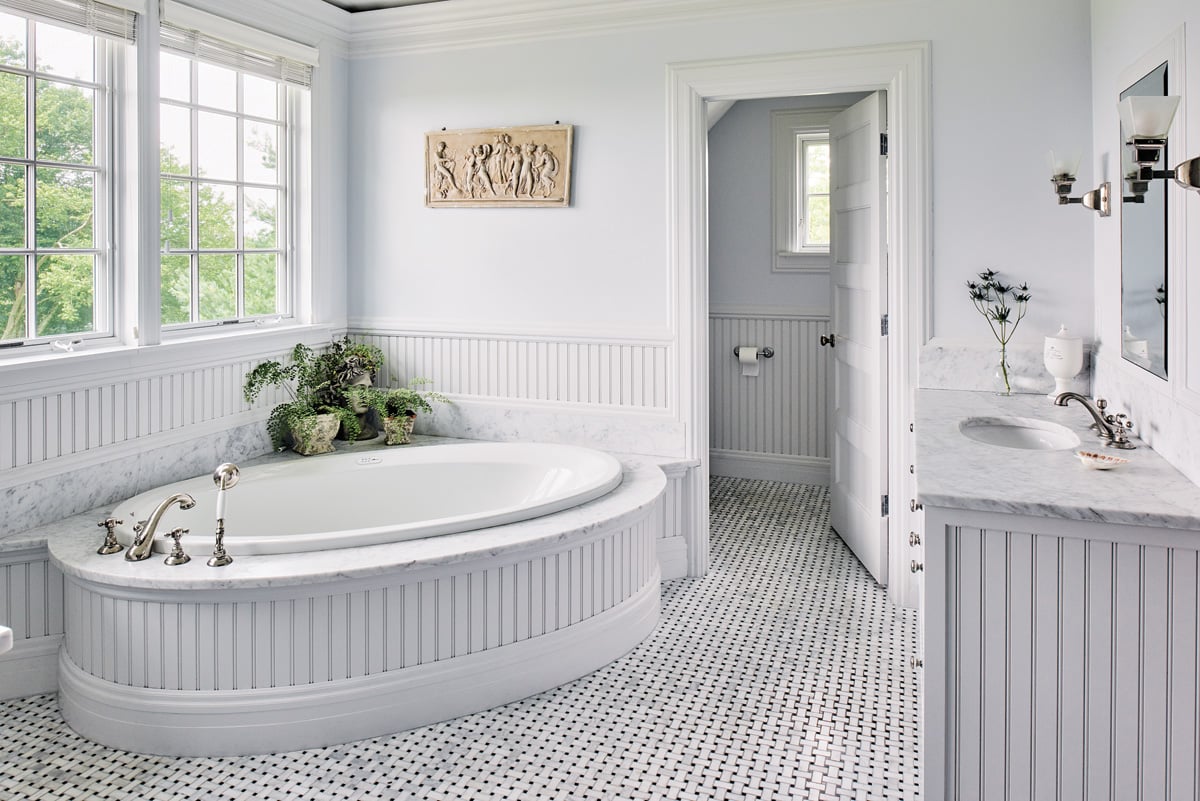 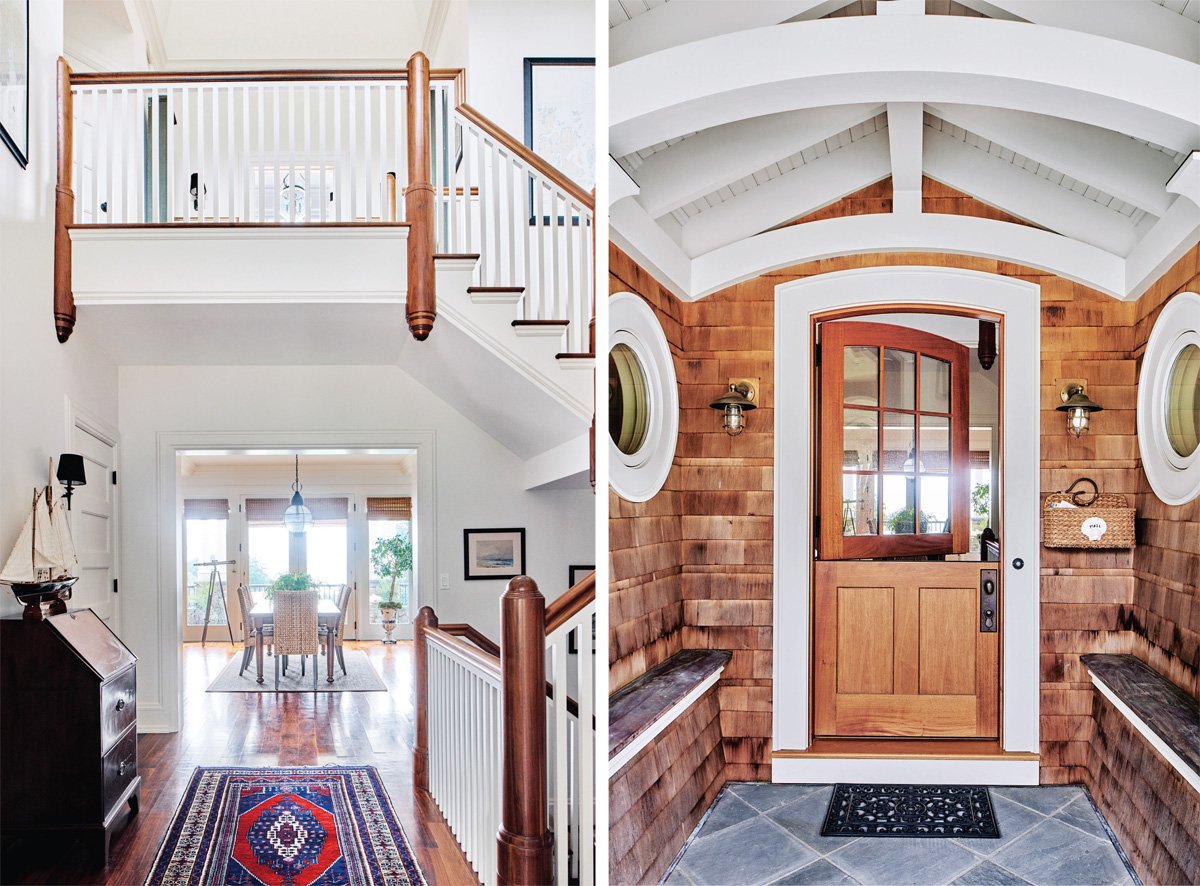 The second floor of Pen Marc’h is occupied by the Milots’ master suite, which includes a marble-infused bathroom and a balcony, both with breathtaking sunset views. The lower level of the home houses the Milots’ teenage son’s bedroom. Connecting all three floors is what Andreozzi considers the centerpiece of the house: a custom staircase bursting with natural light, thanks to the cupola above. The staircase is one of the first things one sees when entering Pen Marc’h, after passing through the recessed entry with its arched rafters, portholes and mahogany Dutch door that perfectly frames the view of the water at the opposite end of the house. And if you didn’t know by then that the homeowners have a love for the sea, you might upon glancing at the staircase’s newel posts that could have come straight off a ship and the nautical charts plotting Charlie’s sails across the Atlantic hanging on the walls. They’re just a few of the numerous details that, taken in together, paint a clear picture of Pen Marc’h’s occupants, which was Andreozzi’s intent when designing the home. “It’s our job to take who the owner is and embed that into the architecture of their home. It’s about their soul, not ours.”