Hour sixteen: It was now 2 a.m., and Cory Pesaturo was still playing his accordion. He had started in the small shop in Graz, Austria at 10:30 a.m. the previous day, taking a five minute break every hour.  Although he had only managed to get two hours of sleep the night before his performance, he wasn’t tired, a product of mental fortitude aided by copious amounts of Red Bull. And though his mind was sharp, his body was faltering. His hands and arms were in agony.

“Eight or ten hours into it, I started feeling things I had never felt before,” Pesaturo says. “By hour sixteen, the pain was so bad. My body was basically telling me, ‘You must stop now, or you’re going to injure yourself forever.’ But I couldn’t stop.”

Pesaturo was trying to break the Guinness World Record for the longest accordion playing session. The time to beat: thirty-one hours and twenty-five minutes. At hour sixteen, he was barely halfway done. 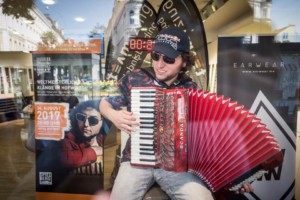 Pesaturo had conceived of breaking the record in L.A., when a couple he was chatting with informed him that their daughter held the record for longest harp playing session (25 hours and 34 minutes). In the realm of Guinness World Records, marathon music-playing sessions are actually quite popular, with some instrumentalists breaking records with mind-numbingly large numbers (501 hours on the hand drum) to comparatively mundane times (24 hours and 11 minutes on the mouth harp). When Pesaturo discovered that there was already a world record for accordion, his mind was made.

With his lofty goal in place, Pesaturo set out to etch his name into the hallowed pages of the Guinness World Records. He contacted Red Bull, got sponsorship for his stunt and then began to prepare himself for the tremendous physical ordeal that lay ahead.

“I wanted to do a seventeen hour test and write down how I felt after. But then I thought I’d rather just save my energy and not do anything,” explains Pesaturo. “I just thought I’d use all my energy for the event. And I think that probably was the best thing to do. There’s no way you can prepare to use your hands for thirty-two hours.”

But he had something that no physical training could give him: a childhood wrought with high expectations.

“I was brought up in a very tough love atmosphere, where even if you had a really big achievement, you’d get a very, very small pat on the back, if that,” says Pesaturo. “That forces you to say, ‘Oh that’s not good enough. Okay, I’ll do something bigger.’ Big achievements, small celebrations.”

He did, however, prepare a lineup of pieces to play. While he could technically win the record by playing a variety of easy melodies like “Hot Cross Buns,” that wasn’t good enough for Pesaturo. He assembled a repertoire of about 140 songs, many of them jazz pieces which, in his words, kept him “mentally stimulated.” He wanted music that would be impressive sounding and entertaining.

“Some people would have just played a bunch of simple tunes. But this is my career. I fly around the world performing. So I needed to test my skills.”

With his repertoire prepared and his body unburdened with superfluous training, he headed to his performance space: a shop’s front window that was overlooking a town square.

Undoubtedly this was the moment his mom and dad had spent decades preparing him for.

With a healthy dose of confidence and a supply of his sponsor’s caffeinated libation, Pesaturo began to play. And play. And play. For hours on end, through hour sixteen and beyond, he played. Through sunset and sunrise, he played. At hour twenty-three the pain was unbearable. He thought he might not go on. They swaddled his arms in ice packs. He kept playing.

And he played right through the old world record and beyond, for another forty-nine minutes.

He left Austria victorious, received a handshake from his mildly impressed father, and had severe pain in his arms and hands for five days afterwards. He had accomplished something that few would care to do. But would he ever do it again?

“If someone breaks the record two hours from now in some other country, let them have it. I ain’t trying it again. That was not fun. That was hell.” 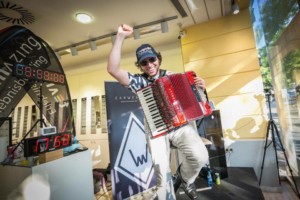