Behind the Scenes at “This Old House” in Barrington

Yesterday, I experienced a few hours on the set of the home improvement show “This Old House.”

Yesterday morning, I experienced a few hours on the set of the home improvement show “This Old House.” Cast members and crew were filming scenes for the last episode of the season, featuring the show’s first home renovation in Rhode Island, a waterfront cottage in Barrington located across from the town beach. Construction of the home began in August and the family is slated to move in this weekend. The Barrington season premieres Sat., Jan. 28 at 4:30 p.m. on Rhode Island PBS, and will continue each Saturday with nine more episodes.

When I arrived, I parked on a side street, then called the cell phone of WGBH public relations specialist Jessica Hartzell, who cautioned me not to ring the doorbell because they were currently filming inside the home. Hartzell came around to meet me, then we patiently waited on the deck for a break in filming, whispering in conversation while overlooking the gorgeous view. We dodged the sliding glass doors to make sure we didn’t end up in the background of one of the shots. A few minutes later, we entered the home.

I met senior series producer Deb Hood. She was the one who scouted this home and location for the renovation, and because the show is not scripted, it is her job to “make sure that everything said on camera is true, clear, accurate, and hopefully, grammatically correct.” She admitted she can sometimes be the grammar police, if possible, but they never try to change the way that people naturally speak, she says.

“We love to put the local trades people on camera and show what they can do,” Hood says. In this season, the resident Rhode Island general contractor is Andy Tiplady of Barrington.

“We wouldn’t have an ending if it wasn’t for Andy. He was the teacher, the leader, the behind the scenes guy,” Hood says.

I was just in time to watch another scene be filmed; Richard Trethewey, the show’s plumbing and heating expert, was showing Geoffrey Allen, the homeowner, how to use the new home automation system, which includes a digital screen that shows the inside and outside temperatures, as well as a five-day weather forecast. Director Thom Draudt made sure the camera angle and blocking (the movement of people, and the movement of the camera) were correct, while Tiplady purposely strolled through the scene as if he was going to work on something. They had to cut several times to reshoot the scene, which had Tiplady walking back and forth across the room several times.

After several takes, homeowner Allen says, “Okay, I have to go.”

But they still had to try one more time to get the scene right.

Tiplady went back to his place and strolled through the room once again, while Tretheway explained the system. This time, the scene flowed well and the director seemed happy, but there was still some hesitation.

“No really, I have to go. I have a conference call in Florence,” says Allen, who is a doctor. The crew joked around about him going to Florence, and he left to make the call.

Although the homeowners appear in the episodes, life and work still goes on for them around the filming.

At this point, I got the chance to look around the home, which is a 1925 cape that was renovated to look brand new. The touches inside the home have an Asian influence and there are pieces of art all over the home, which local designer Lisa Newman (owner of the store Homestyle on Westminster Street in Providence) used as inspiration for the color palettes and themes of each room. The master bedroom resembles the outside colors of a mussel, while a metallic mirror reflects like the inside patina of the shell. The sleeping porch off the master bedroom captures the view. 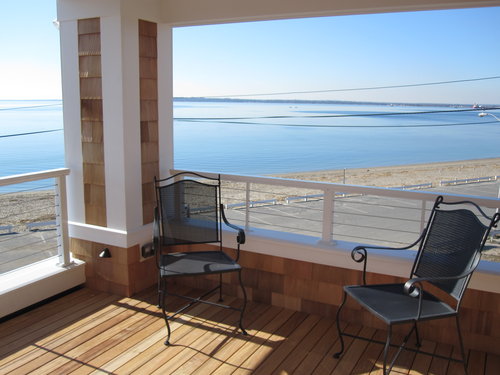 “It’s like being on vacation every day,” Newman says.

Other unique details include the master bathroom’s tile, which has a silken, linen look to it, though it is ceramic, and the light green clear glass tiles on the kitchen backsplash that look like sea glass.

Hartzell tells me that all out-of-pocket costs are paid for by the homeowners; however, the show coordinates product discounts and donations where possible. The general contractor and other people who work on the home are also paid for their work, she adds.

“Norm just arrived,” says Hartzell, and I looked out the window to see host Norm Abram surrounded by a group of people on the side street, wearing his signature plaid shirt.

Then we walked down to the beach to watch Abram and host Kevin O’Connor rehearse the next scene. They were working on the introduction for the final episode, for which they would showcase the exterior of the home in its finished state. O’Connor and Abram were debriefed by Hood before filming, practicing what they would candidly say on camera. They were to sum up the experience of the Rhode Island renovation, while talking about some of the other side projects they did while visiting the state.

Meanwhile, a friend of the cast drove by the beach, screaming out the window, “Bob Vila! Bob Vila! I know you!”

Then it was time to film again. We were careful to stay behind the cameraman while walking backwards on the sand as Abram and O’Connor strolled toward us. They reflected on the five and a half months of work it took to finish the project. They talked about visiting the Newport mansions, and going out on the boat with Tiplady, who also threw a clambake for the cast and crew on that very beach. 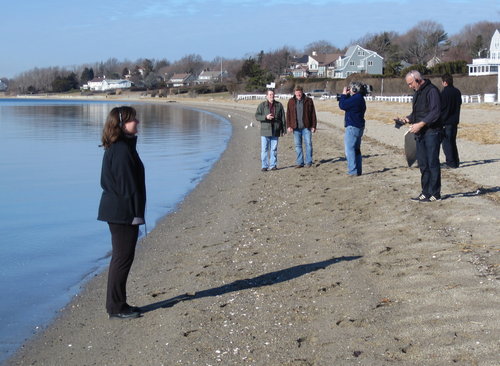 The natural banter that occurred between the pair is what made the scene so sincere.

“Andy cooked up a clambake right here on the beach,” says Abram.

“What is it, quahog or quohog?” says O’Connor.

“Why don’t they just call it a clam?” says O’Connor.

I watched the scene unfold, as it would appear on a television screen, on a wireless handheld video and audio device that is sort of like a baby monitor. The pair strolled up the beach toward the home, and then a wide-angle camera shot revealed the finished project, a beautiful cape with natural cedar shingle siding, and two porches, with sweeping views of the beach.

The next scene included a summary of all the exterior work that was done with the help of Tiplady and architect Mary Brewster. Tiplady would greet Abram and O’Connor outside, and then the team would reflect on the work that was done while pointing out all the weatherproofing details of the home. This scene had to be filmed about eight times to get it perfect.

It had to be re-shot once because they started talking about the bad weather that occurred. Hood advised them not to get in to the weather, because they did not have any footage to illustrate it.

Then it had to be shot again because the dialogue did not go as planned. 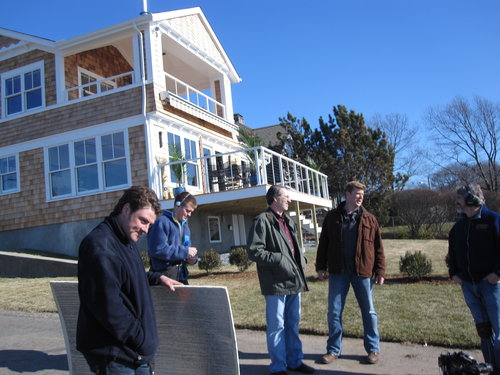 Then, on the next try, the audio became muffled because of a passing plane.

Then it had to be shot again because the scene lacked the energy of previous shots.

Then it had to be shot yet again because when the trio walked through the bushes, Tiplady raised his leg around a bush, instead of walking around it.

“We’re going to call that ‘the Tiplady,’ ” says director Draudt, as he walked over to the bush and lifted his leg like a dog, mocking Tiplady’s actions.

“I did not do that!” Tiplady says.

Finally, after the eighth try, the scene flowed perfectly with Tiplady enthusiastically greeting Abram and O’Conner, and the hosts praising the general contractor’s work on weatherproofing the home. The trio walked around the bushes and up the stairs of the house.

“That was perfect,” says Hood. “It was worth waiting for.”