Sarah McCoy, author of The New York Times and USA Today bestselling novel, The Baker’s Daughter, has a new book out this Tuesday, and she's come to Providence to launch it. The event, hosted by the Center for the Study of Slavery and Justice and Reading with Robin, is scheduled for Tuesday, May 5 at Brown University.

Here's the synopsis of The Mapmaker's Children, McCoy's third novel:

We caught up with McCoy to talk more about The Mapmaker's Children. Read our Q and A below, and learn more about the Brown University event here.

Rhode Island Monthly: How did come up with the idea for The Mapmaker’s Children?

Sarah McCoy: In 2011, after The Baker’s Daughter came out, I had this voice in my head that would not quiet and it was saying, “A dog is not a child.” I don’t have children, I have a dog, my dog is my child — but it kept coming back to me. One night, I sat down and wrote it all in my journal and this scene came to me. She, the voice, was being nasty but she didn’t really mean what she was saying. What came of that was this contemporary story about Eden and Jack Anderson struggling with infertility. Jack brings home a puppy and Eden is like, “That is not a substitution.”

From there, I came upon some information about [West Virginian abolitionist] John Brown and did a lineage of John Brown in my journal. He had twenty children, some who died at childbirth and others who died later of dysentery. Of his children who lived, one was Sarah Brown. That, then, bloomed this narrative for Sarah. At that point, I sat down, I wrote these two narratives, and I wove them together. 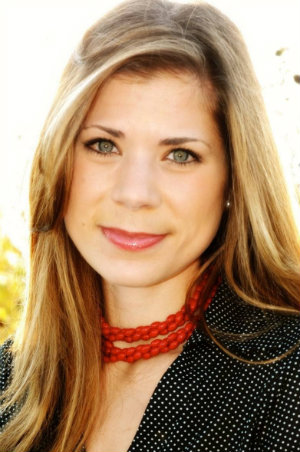 Why did you decide to tell their stories together?

These scars, these hurdles and hindrances and evils and difficulties — both of these characters start with them. Sarah Brown starts with her father being hung and recovering from illness. Eden starts off very angry and she’s struggling and feeling helpless, but through this story and their search for a new identity and a new legacy to leave behind, they puzzle it together. Both of the women start hurting and then they bloom. It changes them into something they never would have been had they not gone through that struggle. They redefine what it means to be worthy as a woman.

How much of the novel is rooted in fact?

I use the facts as guides for my theories and for the theory of the story. I use them as descriptive elements — some real pepper. The fact is, Sarah was so well connected to her father’s secrets, particularly after his death. She studied in Concord with the great minds of the day. There are all these little pieces that say that she couldn’t have been absolutely unconnected to the Underground Railroad. And of course there would be no evidence; they wanted to keep their passengers safe. I personally believe she was active in working with the Underground Railroad.

She also lived through dysentery that took many of the lives of her family and she never married, which was bizarre for the time. Back then, you married. I’d also read a description that out of all of John Brown’s children, this reporter said Sarah Brown was the most tenderhearted and the loveliest of his children. She opened an orphanage, so she obviously loved children. I knew Sarah desired to have children and I knew I wanted to capture that.

That said, I did not set out to write a biography of Sarah Brown. If somebody out there reads my book and decides they want to research every tidbit about Sarah Brown and write a nonfiction masterpiece about her life, I would preorder it right now. That sounds awesome.

The Baker’s Daughter is also a work of historical fiction. Why are you drawn to this particular genre?

This is what I’ve been called to. When I read, I want to have exercised my mental muscles. I want to be stronger, more knowledgeable. If a book just provides puff and fluff, I almost get angry at the end. It’s like I ate cotton candy. I understand that sometimes your world is so chaotic that you need that, but that’s not my kind of fiction. I want something that inspires and lasts.

You’re launching your book at Brown University, which was named after the Brown family from Rhode Island — a mixed bag of both slave traders and abolitionists who are not related to Sarah Brown. Was this a happy accident?

Funny enough, I had never been to New England before I came to Rhode Island with Robin [Kall, of Reading with Robin] for the Evening with Authors series. That’s the farthest north I’d ever been. I’ve always stayed in the south; I’m a Southern girl. But I fell in love with it. I loved Rhode Island. It’s heavenly.

About a year ago, we started planning and I knew I was coming to Providence. I knew there were Underground Railroad connections in the area from research for my book. And I just had inklings — throughout this whole book I’ve had these strange inklings, weird things that just popped up in my writing that felt like Sarah Brown and these characters were guiding me.

So Robin and I started looking around and she said, just like I had said, that weird connections were popping up. We reached out to Brown, and immediately the Center for the Study of Slavery and Justice was onboard. So we booked it, and it was meant to be.

What do you hope readers will take from the novel?

We all have these periods of time where it’s dark, but if we struggle through and push forward toward something bigger than us that tests our faith and makes us stronger — sort of like that analogy, being refined by fire — by the end what we accomplish can never be forgotten because it’s been purified.

I want readers to have that experience — a little bit of a life change in a book. I know that sounds very lofty, but that’s why I write: to reach out and touch readers. That means everything to me. Those are my goals. I know that readers have a lot going on and their hours are golden. If they take the time with my work, I am so honored. I don’t take that for granted.

This interview was edited and condensed for clarity.