At Home with J. Schatz

An L.A. couple settles in Olneyville for work and life.

Coast to Coast
Stepping into the Olneyville building that Jim Schatz and Peter Souza now call work and home, it’s hard to believe a mere fifteen months ago they were seeing the space for the first time. While most would still have a lengthy to-do list, Schatz and Souza swooped in and completely transformed the former Weybossett Mills dye house, which had served as an office building for years, into a studio and living space that’s not only functional but beautifully highlights many of the building’s original industrial features. It was important for them to honor the 5,200-square-foot building they fell in love with at first sight during an October 2015 tour of New England cities. Los Angeles, where they had lived and worked for several years, wasn’t working out and they needed a change. Not only did the building, which dates around 1880 and is on the National Register of Historic Places, check all the boxes they were looking for, but its Olneyville location, with its arts- and design-focused community, did too. Just four months after that fateful stop in Providence, Schatz and Souza were packing up their Los Angeles home and heading east. 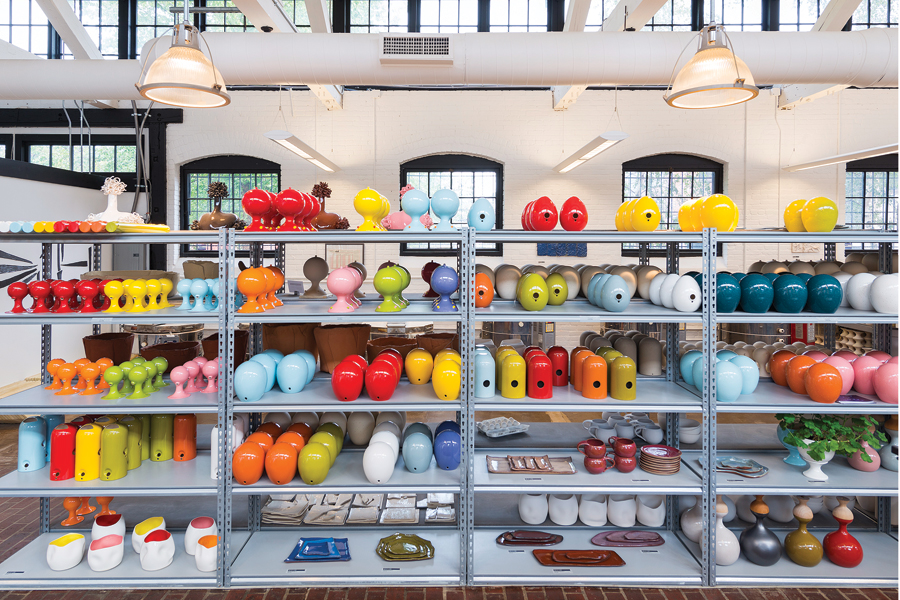 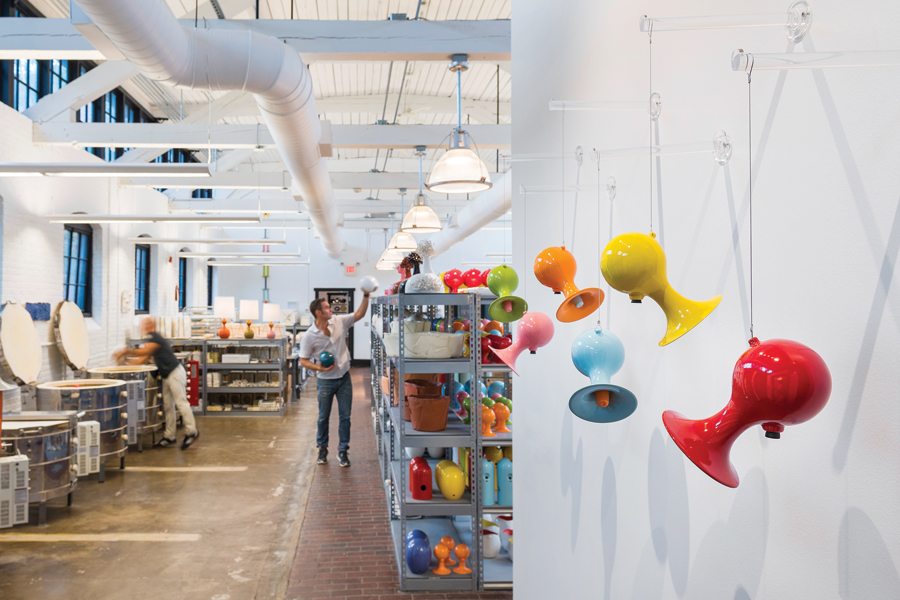 Relocating their ceramics business from the West Coast to New England involved dismantling, moving and reassembling six industrial kilns, which was no easy task.

Assembly Line
The studio space, where Schatz and Souza run their fourteen-year-old ceramics company, J. Schatz, was the first area to get an overhaul. Not that the couple had much of a choice: Within two weeks of arriving in Providence, they had the shipping and receiving end of the business up and running so they could continue to fill orders without skipping a beat. At the same time, they had to get the building in working order, have the lights and water turned on and fix the heating system before they could start moving in themselves. But even before they overcame many of the challenging logistics and cleaned up the space, Schatz and Souza could see just how ideal the former dye house, with its twenty-foot ceilings and more than 160 windows, was for their color-focused business. “The light is constant all day and it’s great for our work. In many ways we feel like we are enjoying the same light as the building was intended for,” Schatz says. The studio is set up to follow a specific workflow, so that production of J. Schatz’s signature bird houses, feeders, lamps and dinnerware moves about the studio with ease, while also leaving plenty of room for when the couple hosts parties and community arts events. As an added bonus, the bounty of natural light and the space’s crisp white palette allow the colorful ceramics to take center stage. Additional rooms at the front of the building were made into two suites where the couple hosts guests. 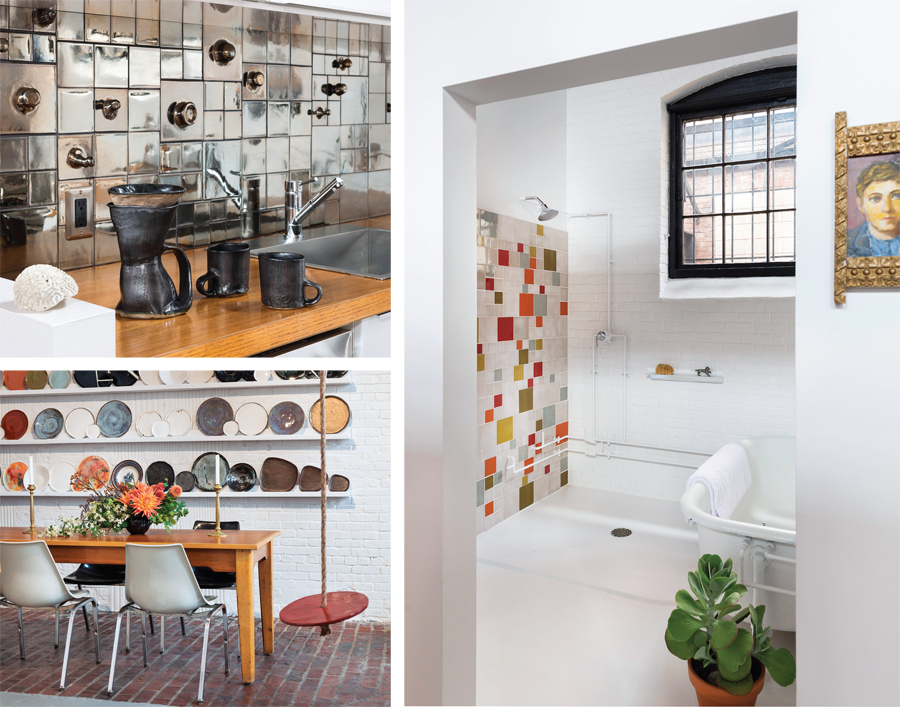 The bathroom is open to the common area so that visitors — and the couple — can see the custom tile work in the shower at all times. Left: a J. Schatz “Brutal” coffee maker and mugs. “We really do use everything we make,” Souza says.

Art Life
Once the studio was functional, Schatz and Souza turned their attention to the living space at the rear of the building. They chose to keep the layout open, so the building’s unique features, like the exposed beams and mechanics left over from its factory days hanging along the ceiling, remained visible. Theater lighting is strategically placed throughout to highlight those features as well as the space below. Like the studio, the color palette of white walls, wood beams and brick was a conscious choice. “We maintained the simplicity of the space back here, because we really wanted it to be the building that’s taking all the credit for what the space is,” Souza says. J. Schatz originals can be spotted throughout the living area. In the bathroom, the couple created a custom tile wall in the shower made of speckled stoneware in earth tones. In the kitchen, another original work, a mosaic of textured metallic tiles, serves as a backsplash. “It sparkles at night when the lights are turned on,” Schatz says. And in the dining room, three twelve-foot shelves showcase an oeuvre of the couple’s tableware designs, including past and present pieces that they’ve sold under their label, along with one-of-a-kind creations. 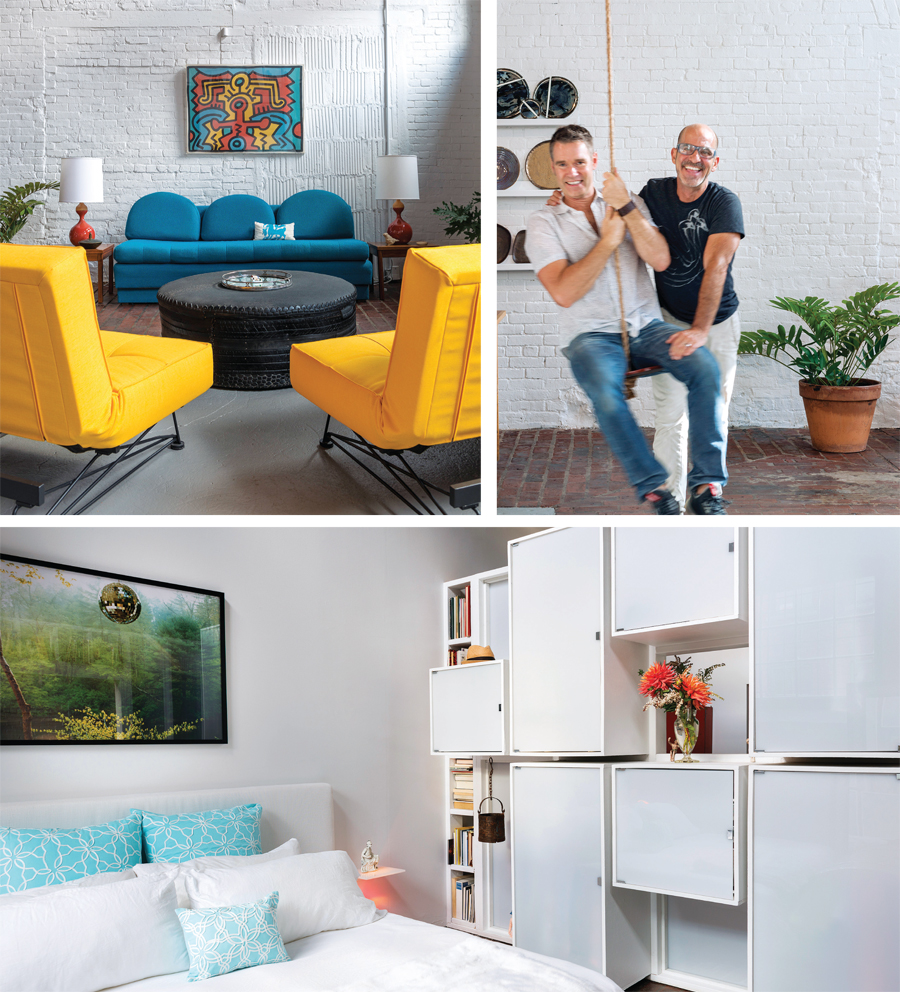 In the living room area, a painting from Keith Haring’s Growing Suite collection and a pair of J. Schatz lamps accessorize the colorful space.

Settled Down
A stoneware swing, another J. Schatz work, is a playful addition to the common area, where the couple likes to entertain regularly. “It’s fun but just sitting there is also great for relieving tension,” Souza says. A custom translucent wall cordons off the bedroom, while still letting light in and creating additional storage space. Sliding copper doors — a Brimfield find believed to date back to around the same time that the building was constructed — allow for additional privacy.  The couple’s sofa and entryway credenza were local discoveries purchased from Providence’s White Star Antiques, while other pieces were sourced farther afield. Just a year ago, the couple was living at the Dean Hotel downtown, waiting for the heat to be turned on in their new home. Twelve months later, they are fully settled and couldn’t be happier that they made the move east. Souza says, “Leaving L.A., we were looking for a community that was smaller, walkable and open to new people and we are certain we made the right decision.  We feel so fortunate to have found this building. We really love it here.”