The just-announced Arcade renovations are projected to finish by August, with doors opening to the public in early fall. Who’s excited? 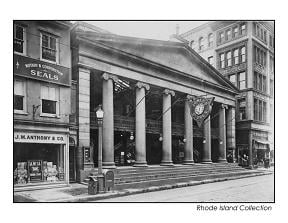 The Westminster Arcade in downtown Providence has sat vacant since 2008. I know I’m not the only person who wondered why.

A grand, imposing Greek Revival structure, the Arcade — best known as the oldest shopping mall in the country — was one of many local businesses that couldn’t fight the economic downturn in 2008. Renovations were planned, but didn’t go through.

It’s not like the Arcade just shuttered its doors and faded into the recession landscape. Prefaced by a vacant slab of concrete (a rarity in downtown Providence), the Arcade is one of the first buildings to greet walkers, bikers, drivers and bus riders entering onto Westminster Street from Memorial, setting a grim tone for a still-flourishing downtown way.

Since its closure in 2008, the Arcade also made its way onto the Providence Preservation Society’s “Ten Most Endangered Properties in Providence” list. There were talks of reconfiguring the space for a single tenant, and that idea landed the Arcade on the Preservation Society’s list for three consecutive years. According to the 2011 report, “the integrity of the interior space, especially the public corridor, will be severely jeopardized” should the space be reconfigured for a single tenant.

But out of the blue, all that changed: Last week, Evan Granoff of Westminster Street Associates announced plans for a $7 million renovation of the Arcade, which was recognized as a National Historic Landmark by the National Park Service in 1976.

“It will be called the Arcade Providence and it will be a historic revival,” Granoff said on January 25. “This historic revival will create an Arcade community, increase the energy in the heart of downtown, help drive business to surrounding retailers, attract new retail and restaurants and bring micro-loft residents into downtown to live, eat and shop. And it begins today.”

Granoff announced that, in addition to new retail spaces, the re-branded Arcade Providence will host forty-eight micro-lofts on the second and third floors. The majority of the apartments will range from 225 to 270 square feet in size, and will be completely furnished with built-in beds, storage and seating. Rents will start at the cut-rate price of $550 per month, including utilities.

Not that I bunk at the Breakers or anything, but 225 to 270 square feet seems a bit tight. In my quest for layouts of tiny apartments online (and the people who inhabit them), I stumbled upon this fun blog, thetinylife.com, which offers near-endless examples of pint-sized homes and apartments, many of which fall within the Arcade micro-loft square footage.

To the right is an actual floor plan for one of the Arcade’s third floor micro-lofts.

My fascination with tiny spaces aside, the new and improved Arcade will also boast fourteen small and mid-sized shops and eateries, with at least one restaurant offering outdoor seating in the warmer months. The Arcade renovations are projected to finish by August, with doors opening to the public in early fall. Who’s excited?