Head to Long Time Sun Apparel for all your yoga needs, from clothing and mats to classes and community meditation.

Thanks to a successful Kickstarter campaign, twenty-nine-year-old Kyla Rose Maher, a popular City by the Sea yoga instructor and online business guru, has launched a brand new retail/practice space: Long Time Sun Apparel on Thames Street, right in the heart of Newport. We caught up with Maher to get all the details.

What led you to your Kickstarter campaign?

I have been running an online business for a couple of years now, mainly selling Kundalini yoga* apparel and accessories to support the practice and then going to yoga festivals all over the country. I was renting space from the Newport Congregational Church, and it was a warehouse-y space with therapists on either side of me and, you know, the walls were thin. Long story short, they asked me, kindly, to leave (laughs)…. I have had the idea that it was my long-term plan to have a retail storefront and sell products and clothing to support spiritual practice and yoga, with a back room for my online business. So I kind of took it as a push from the universe to do something big.

I posted something on Facebook asking people, hey, do you know of any places to rent? In the middle of the summer, too! Then I asked, what if I just do a Kickstarter for this cool hippie boutique where you can also take yoga? I got a really great response from people and thought: All right, just go for it!

How did you find your great space on Thames?

There’s a funny story about how I had found the space but was stalling with the realtor because I only had about $3,000 in my Kickstarter. I have this amazing network of people — I think I averaged about $1,000 a day in the first five days — and I was getting all this amazing feedback, but I also didn’t want to sign a lease because if you don’t reach your goal you don’t get the money. So, that would’ve really sucked.

So I went to the realtor and said, the windows need work, the floors need work. And they were like okay, okay. And that was done in like a day.

Yes! At that point, I had about $6,000 but it was still early. Then, I didn’t even know if we could teach yoga, if the zoning on Thames would permit that, so I went down to City Hall and they were like yeah, sure, you can totally do that. Like, are you kidding me? I was there an hour. Then I had to get my lawyer to look at the lease, and she gets back to me in a day…. At this point we’re at $8,600, so I was like, let’s do it.

So I came down, nervously excited, to sign the lease. When I left, I of course checked my phone — it’s attached to my hand at all times — and opened my Kickstarter app and at that moment it was at $10,003, at day eleven of a twenty-day Kickstarter. I realize now that I had to really commit before that energy would flow in. And the donations keep coming in; we’re up to about $13,000 now.

Why do you think people responded that way?

I think there’s this shift of people wanting spirituality in their lives. Yoga studios are on the rise; there’s a demand for it. There’s nothing wrong with partying and booze and the Newport vibe. So many young people come here to party. But there are also so many people here who are meditating and there are holistic groups who want access to the type of stuff that we’ll be doing at the space. It’s already happening; we just needed to connect the dots. 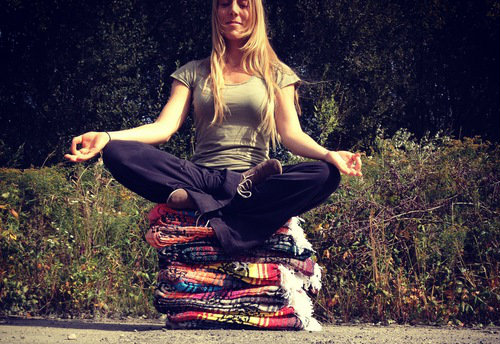 When did you decide you wanted to start the business?

I grew up in Portsmouth, and my mom’s an entrepreneur — my whole family is full of entrepreneurs — so it’s sort of in my genetics. I have a degree in sports medicine was planning to be a doctor until I realized it wasn’t my path. After that, I struggled with drug addiction and went to a really dark place for a while. Then I got sober and started practicing yoga.

Kundalini yoga — I thought it was a totally weird kind of yoga, but coming out of a really dark time I thought, I don’t care how weird it is. It’s helping me so I’m going to do it! People who practice Kundalini yoga wear white, but nobody carries white yoga clothes so there was whole niche that’s looking just for that. I won’t be selling just Kundalini yoga stuff here, but that’s how I got started with the online business.

Tell us about your plan for the Thames Street space.

During the day, it will be a retail shop with consciously made clothing, mala beads, meditation cushions, yoga mats, different accessories for your yoga practice. In the back, there’s a big room where I’ll do packing and shipping for the online business. Everything in the front is on wheels, so it can easily be moved to the back room so the retail space will convert to a yoga studio in the morning and at night. The store has these great windows in the front so people walking by can see yoga — it’ll be a change to have yoga going on in the middle of Thames Street.

I teach every Tuesday night at Zettmar Studio, a friend’s art studio where I’ve taught for a full year. I play a gong also, which is becoming very, very popular. Kundalini yoga — more and more, people are becoming familiar with it. The class is sold out every week. It’s all been word of mouth and it’s this secret gem of a class where people show up an hour early to get a spot. So I’ll start off with that at the store, plus a monthly community meditation [the first is scheduled for September 21], spiritual music concerts and we’ll be adding other events to bring people together.

When can we start shopping?

We opened for retail sales this weekend…then every day from 10 a.m. to 8 p.m. except for Tuesday night because yoga is in session starting at 6 p.m. The opening party is September 13. I’ll have a private gong bath for the Kickstarter backers and doors open to the public at 8 p.m.

How is the space coming along?

We’re pretty much done! We have a raised stage space, which will be a hangout place during retail hours and I’ll teach yoga there, with a mural behind it. My sister did the mural — she’s so cool, she’s signed by a label in New York City and she’s in a band. She came in and was like, “Do you trust me?” There’s been a lot of letting go on my part (laughs). My father did a lot of the building and woodwork. We have some beautiful clothing racks on wheels and organic branch clothing racks built into the walls. It’s not like a dirty hippie place; it’s hippie glam. It feels new — sacred.

*For more information on Kundalini yoga, a more spiritual type of yoga with an emphasis on breathing, meditation, mudra gestures and chanting, visit kundaliniresearchinstitute.org.