A Labor of Love in Exeter 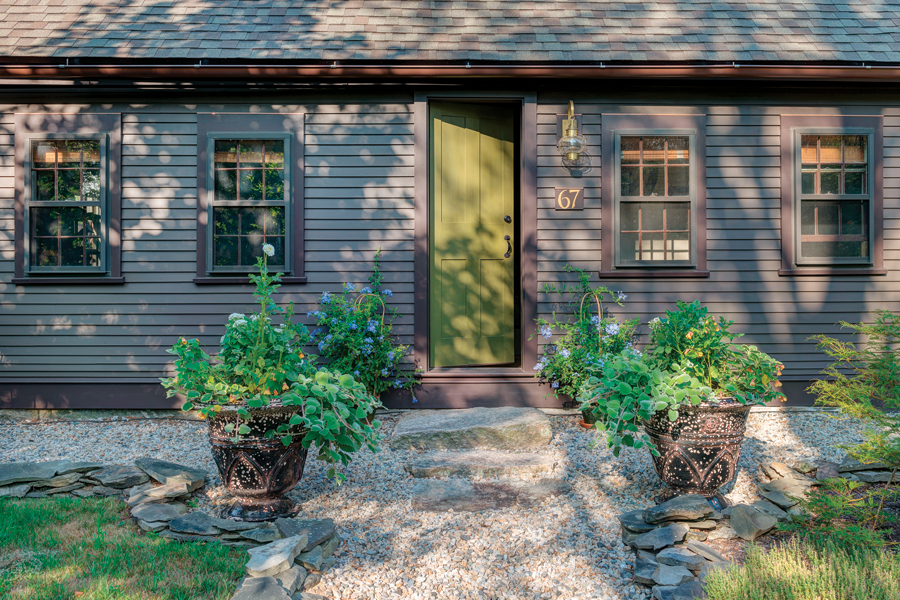 House Guests
To say that the quaint pre-Colonial tucked away on a gravel road in Exeter had its challenges would not be an exaggeration. “Have you ever seen the movie Funny Farm?” the home’s owner, Laura Seita, asks with a laugh. “It was a bit like that.” The infestation of flying squirrels Seita and her husband, Domenic, discovered their first fall in the house in 2011 would have been enough on its own, but the house — which is believed to have been built in 1710 and owned by one family until its first sale in the 1980s — required a ton of structural and cosmetic work to boot. It was probably a bit more than the couple originally anticipated when they first laid eyes on the charming one-bedroom, one-bath on an acre of land in their quest to relocate from Brooklyn to be closer to Domenic’s family, Laura admits. “That was likely due to too much ‘This Old House’ as a child, combined with being completely burnt out on New York,” she says.

Laura alternates what grows in the kitchen garden from year to year. This summer was vegetables and herbs, while a previous season saw mainly flowers. This winter, she hopes to research Colonial gardens to make future crops more historically accurate. “I love the idea of trying to grow as much of what they would have had back then as possible.”

Labor of Love
Still, the couple — she a floral designer with her own business called Fig and Squill, and he a carpenter and welder — both enjoy working with their hands and were up for all the challenges the house was ready to throw at them. Since moving in, their to-do list included putting on a new roof, refinishing the floors throughout, replacing the storm windows, ripping out drop ceilings and redoing much of the plasterwork. The backyard got a new barn, where both Laura and Domenic now do much of their work. Large stones that once made up the kitchen garden’s beds were moved to the front walkway and new wood beds were built. The couple is conscious about maintaining the authenticity of the home through every project. Case in point: the decision to replace the house’s front shingles with Colonial-style clapboards. “We don’t want to do anything that’s out of keeping with the house,” Laura explains. “In his work, Domenic sees the worst of bad repairs and poor choices. We’re really trying to be aesthetically true to what was happening with the house at the time it was built.” 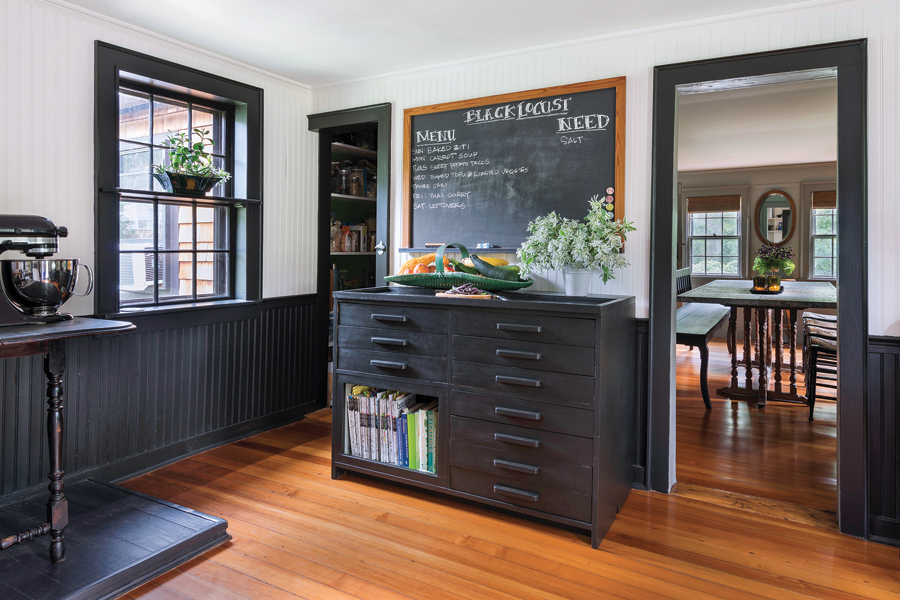 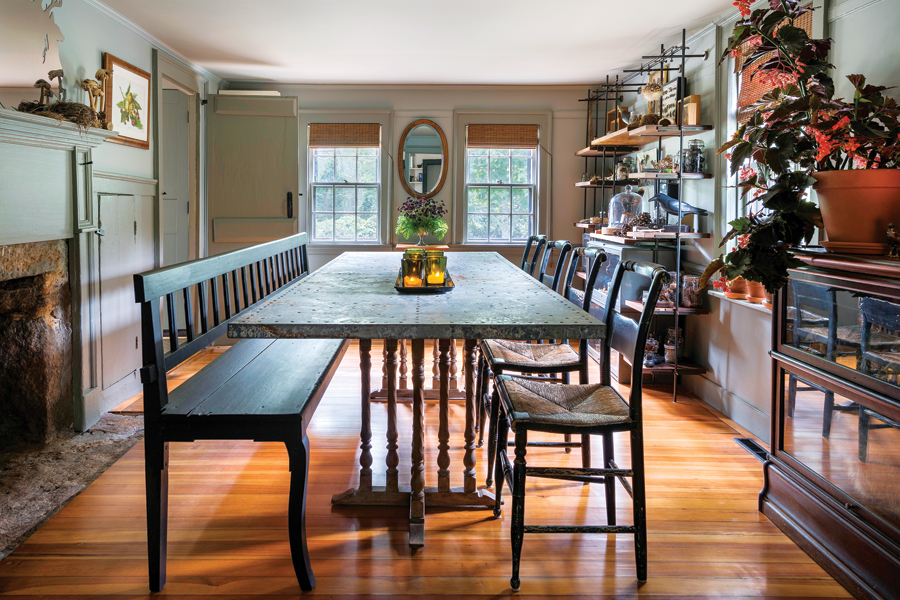 Until the full kitchen gut, the Seitas make do with a fresh coat of paint and some creative design touches, including this magnetic chalkboard that Domenic built to write the week’s menu of dinners. “When you live in the middle of nature, you have to be extremely organized,” Laura says.

Step by Step
Naturally, a project this involved was bound to have some unexpected surprises along the way, like the day Domenic discovered old corn cobs inside the walls. He originally blamed the squirrels, but soon realized that it was actually the house’s original insulation, intact after all these centuries. The interior redesign has been a bit smoother, with the couple blending the home’s Colonial style with a mix of antiques and more contemporary furniture and color choices. The kitchen has remained relatively untouched, save for a fresh coat of black and white paint, but a full gut is in its future. In the meantime, decorative enhancements, like the handmade menu board and dental cabinet-turned-coffee station, make the need for a renovation hardly noticeable. The dining room, home to the house’s original double hearth, holds the couple’s collection of flora and fauna from around the world: He’s partial to bones, birds and pinecones, while insects, snakes and botanical items tend to catch her eye. The metal-topped table and bench that fits perfectly with it were Brimfield finds that Laura held onto for years in New York before making the move to Rhode Island. 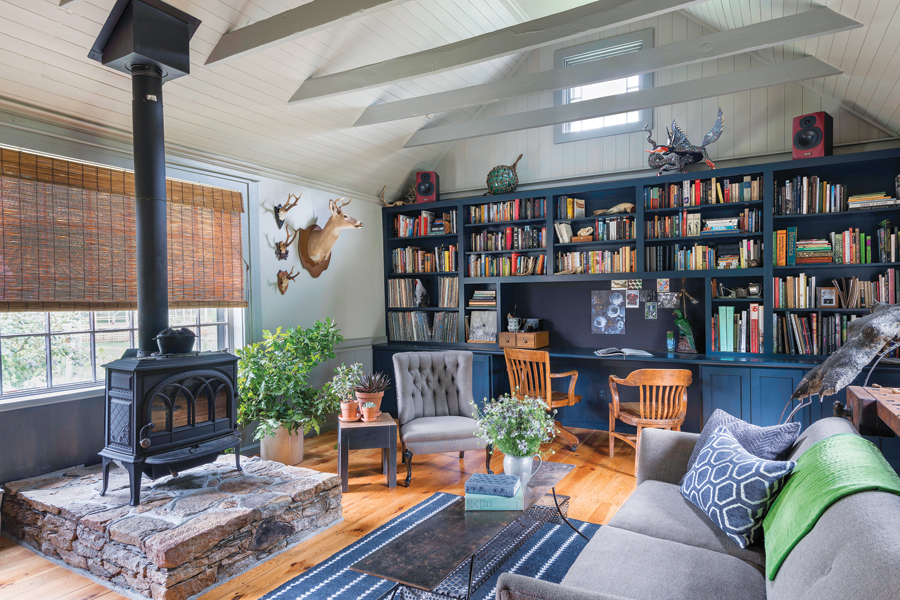 New Addition
While the couple spends much of their free time in the family room, not all previous owners had such a pleasure. After purchasing the home, Laura and Domenic were told by locals that the raftered space was originally either a blacksmith’s shop on Prudence Island or a library in Jamestown that was hauled over by boat and attached to the house in the 1800s. The once-sparse room was given a new hearth and wood stove and a wall of built-in bookshelves. The paint colors, Sandy Hook and Galveston Gray by Benjamin Moore, along with the life-size octopus print, strike just the right contemporary note without veering too far from the Colonial feel. The metal wood rack, made by Domenic, ensures the couple has plenty of fuel for the wood stove on cold winter nights. Hauling wood and fighting off flying squirrels may be vastly different from the city life the Seitas lived not too long ago, but despite all the work, Laura says the move, and buying this home, was the right decision. “It’s a nice work-life balance when I can wander through the yard in the early morning and take a few minutes to tend to the garden on my way to work in the barn,” she says. “Those are the kinds of quiet moments in the day that I know I wouldn’t have in the city.” 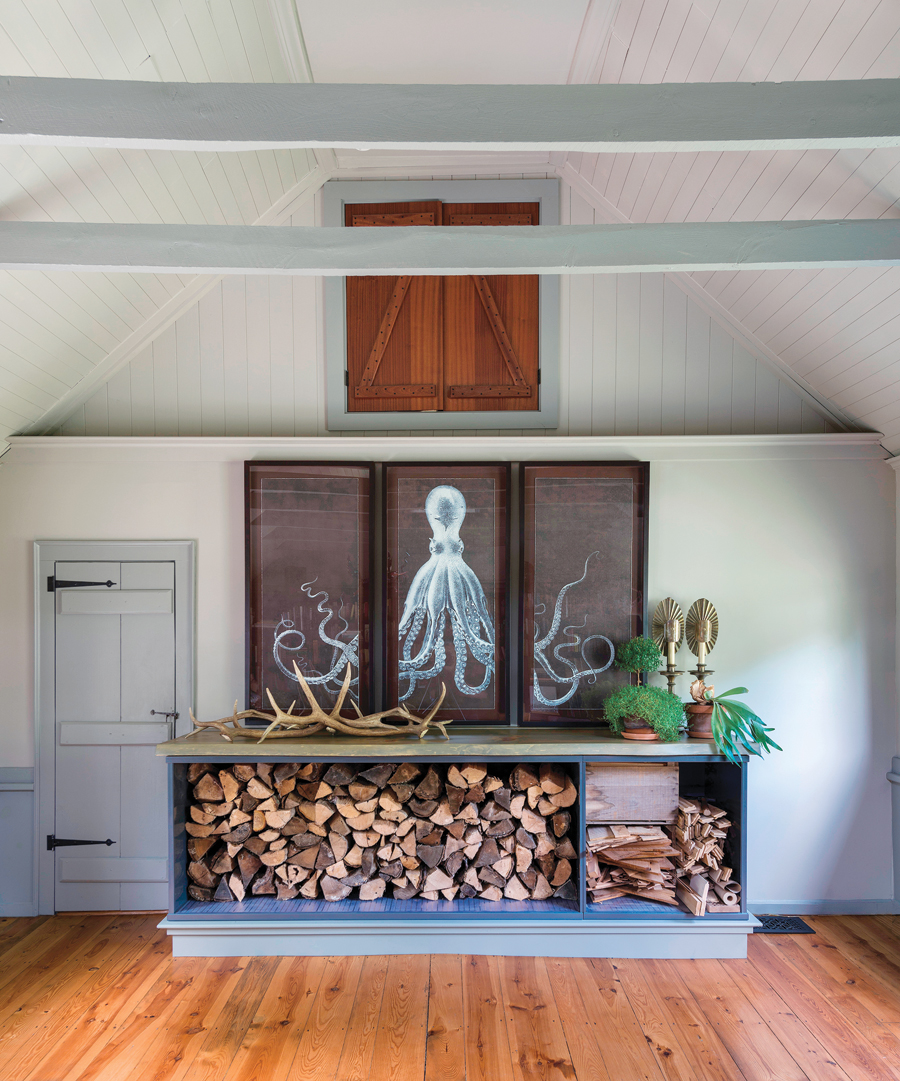