The home designer Jens Risom built for his family endures five decades in. 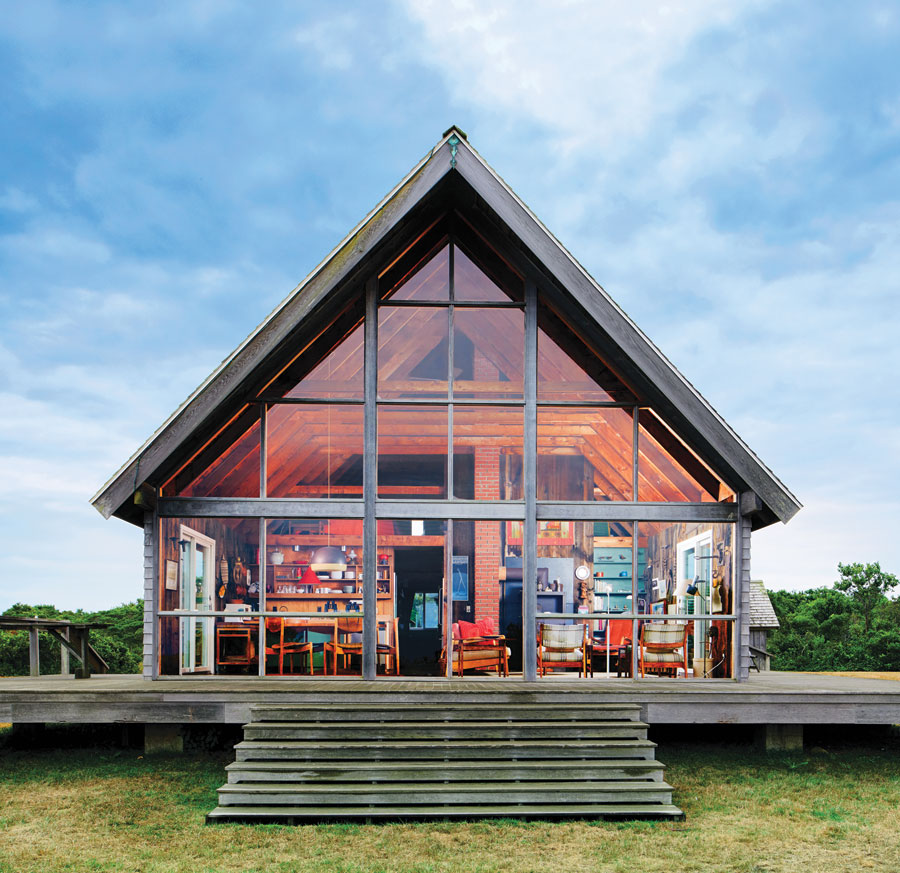 While its incomparable views of Block Island Sound have remained steadfast, a few changes were made to the front of the house over the years. Originally designed in wood with a glass panel in the center, Jens swapped those plans for the all-glass design that makes the house so unusual. A front door was taken out in the first year because of the area’s high winds and, more recently, the framing was rebuilt for maintenance of the house. 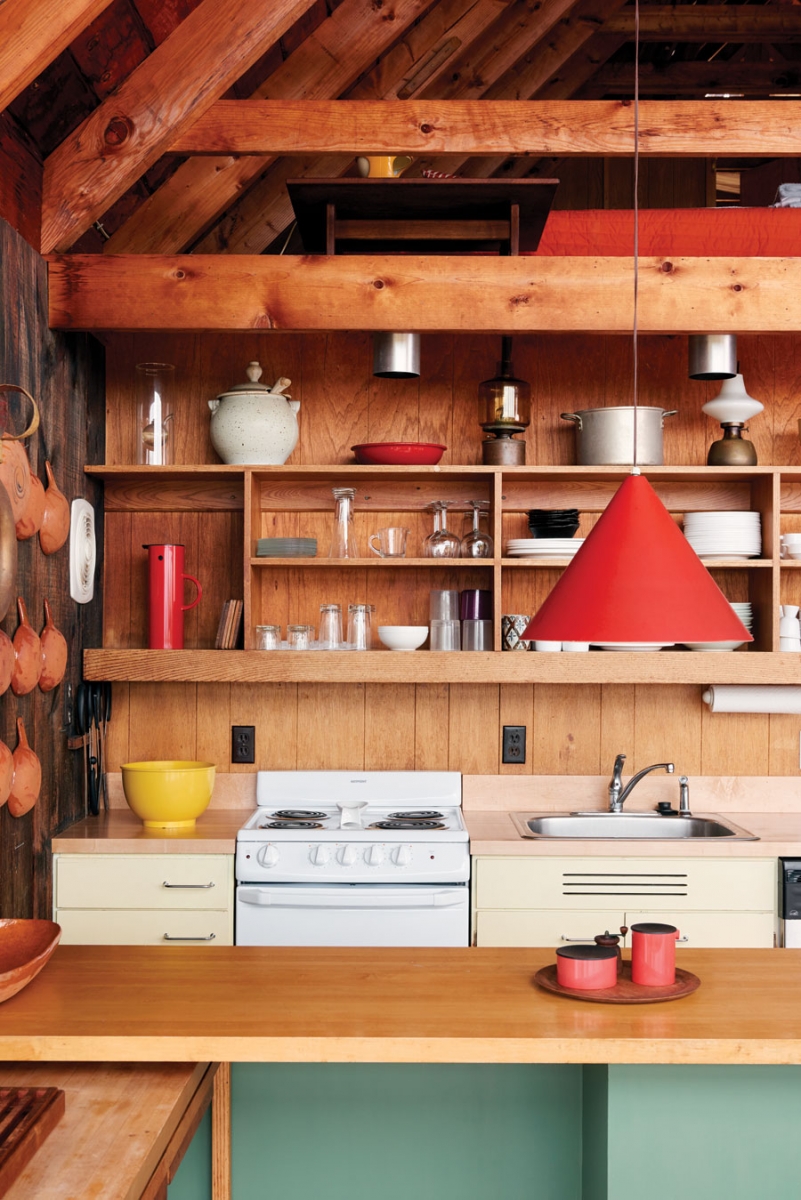 No one would have faulted the Risoms for choosing to expand or renovate their nearly fifty-year-old Block Island summer home at some point over the years. Since their father, renowned Danish-born furniture designer Jens Risom, designed and built the home in 1967, the family has grown by eleven grand-children, making the need for more room seemingly imminent. But doing so would run contrary to the “less-is-more” philosophy that guided so much of the midcentury modern designer’s work and life, as well as his vision for the prefab glass-fronted structure that has stood the test of time for so many decades on a hill overlooking the island’s northern tip. It was that longing for a less complex life that first drew Risom to Block Island in the 1950s, when the family began to spend summers there. “He was drawn to the simplicity, the beauty of the island. To him, it was a lot like Denmark,” said Risom’s son, Sven, who now lives on the island year-round, in a house just down the street from the family summer retreat. 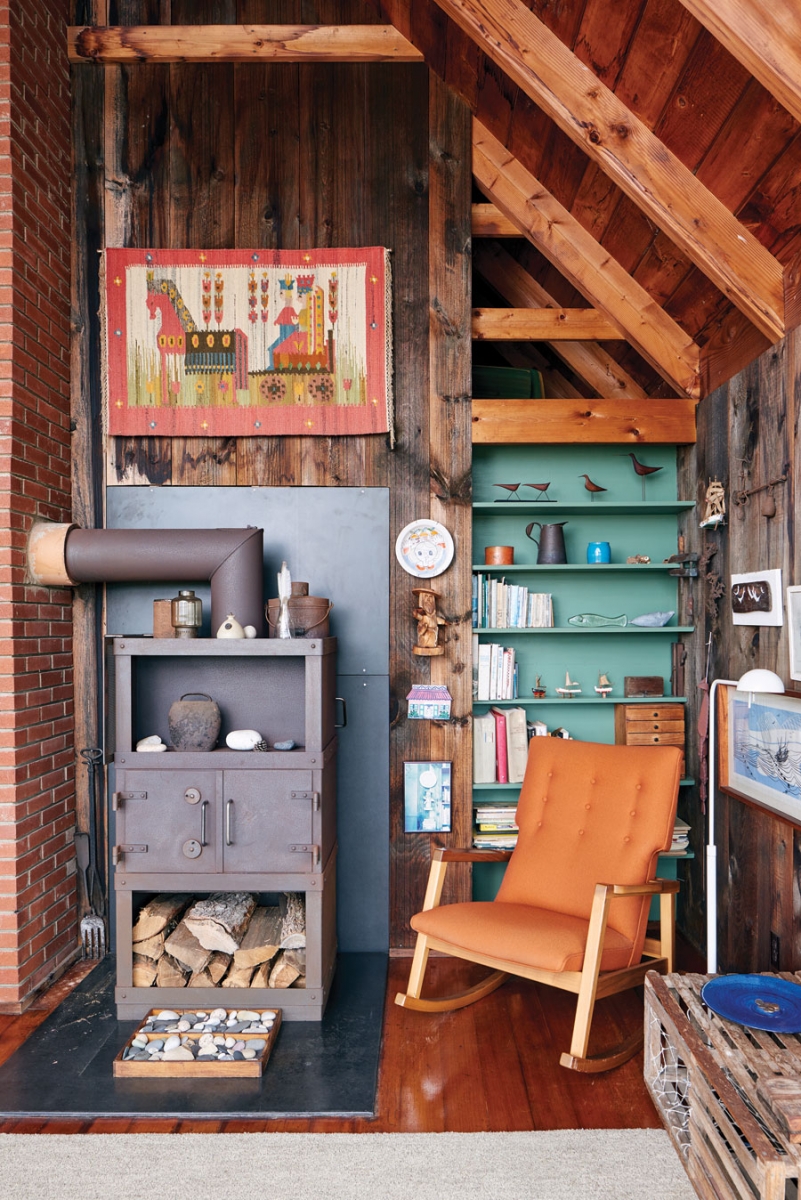 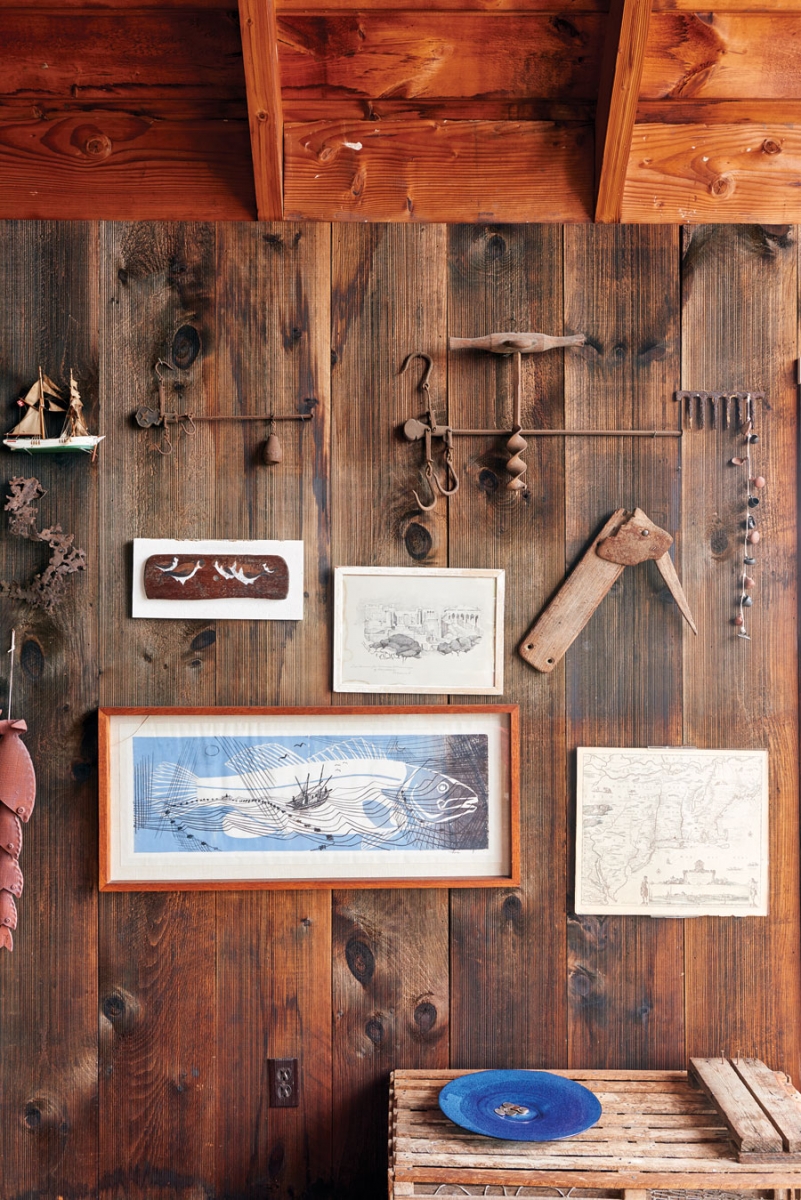 The house is filled with items collected over time. On one living room wall, old farm tools found on a local beach share space with art and a Danish warship that’s a nod to the family’s European roots.

Jens, who now lives in Connecticut and celebrated his one hundreth birthday this May, was a proponent of the prefab building model, which was rising in popularity in the 1960s when he designed the summer home. “His thinking was that you can build a much, much better wall in a factory or closed space and when you have control over your environment, it’s going to be better,” Sven explains. The A-frame structure sits at the end of a dirt road so well-divoted and thickly lined with brush that it’s hard to imagine how the house made its way in pieces from ferry to truck to its final resting place. The spot, which provides unfettered views of Block Island Sound and Rhode Island’s mainland beyond, was discovered by Jens’s wife while looking for a place to run the family’s Airedales that wouldn’t disturb a local farmer’s sheep, according to Sven’s sister, Peggy Risom Bull, who also has a home on the island. 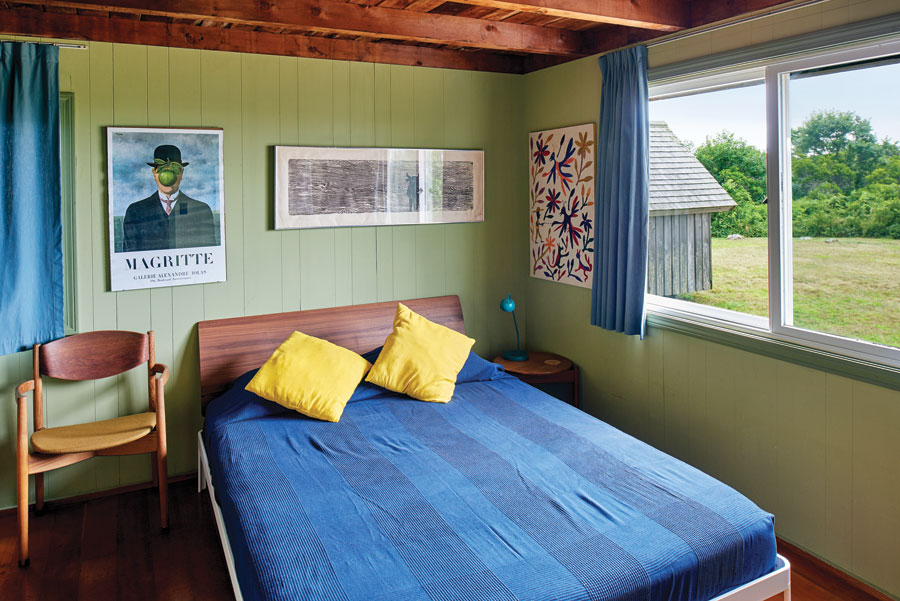 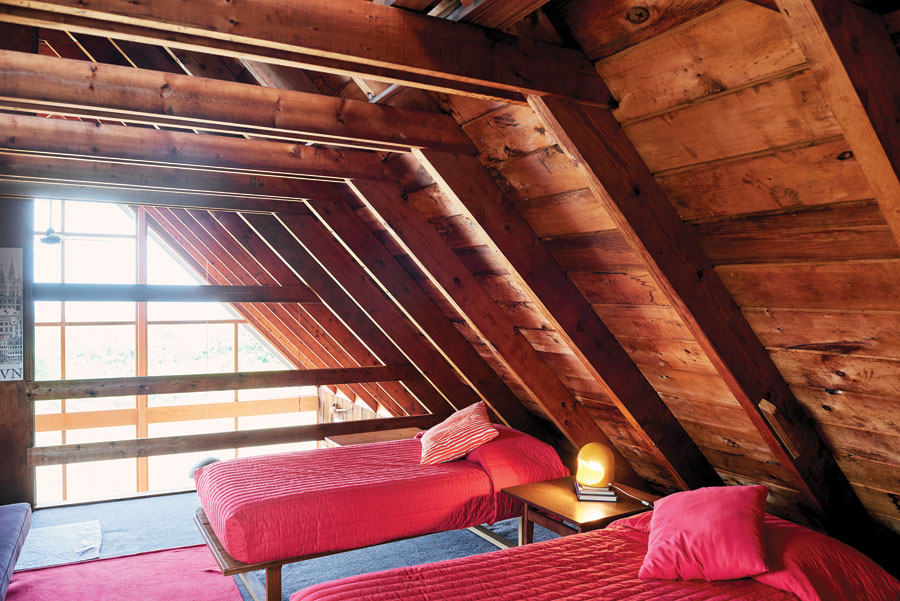 The house can sleep up to twenty creatively, as it did during Sven’s son’s recent wedding, which was held on the lawn.

Very few changes aside from necessary maintenance were made to the house over the years, and the inside remains equally untouched. Jens, who was the first designer for Knoll Furniture Company and is credited with helping popularize midcentury modern style, designed most of the furniture, which still outfits the house today. The pieces’ clean lines and wooden frames look right at home under the rustic pine rafters, giving the whole house a deliberate sense of warmth and welcoming. “It’s the kind of house that you walk into and feel very comfortable very quickly,” Sven says. “You ease into it much like you ease into a great chair.” The layout, a large communal area with two bedrooms and a loft with more sleeping space overhead, was designed to unify its occupants. “Running away to a corner is not an option here,” Sven says. “My father loves open space and this home was about socializing.” 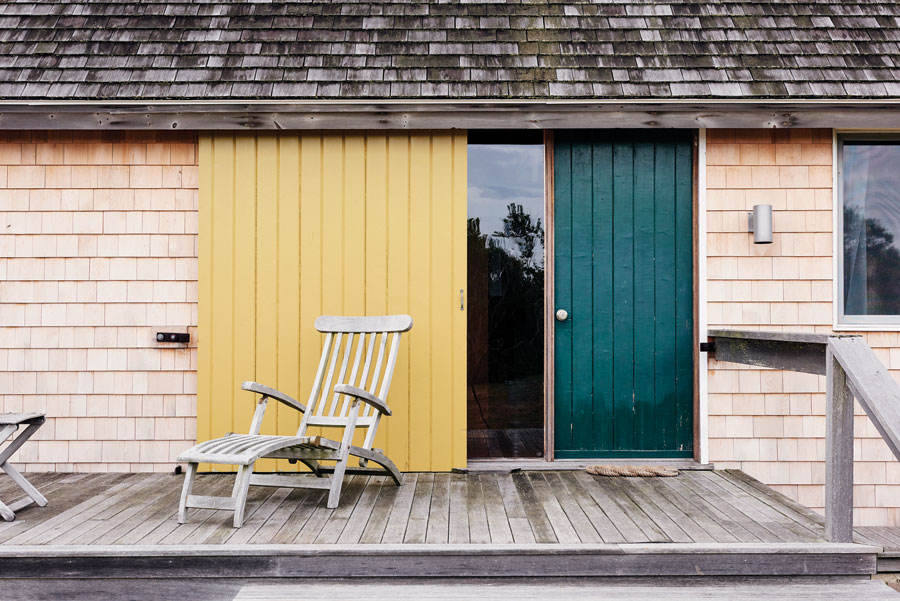 A deck wraps around three sides of the house to make optimal use of the outdoors.

All summer long, family comes from near and far, taking turns staying in the house in weeklong shifts. Board games, stored by the stack up in the loft, and a boombox in the living room are about as complex as the entertainment gets. Sven and Peggy recall summers spent sailing, taking long walks with their mother and two other siblings and bluefishing. Berry picking was another favorite pastime. “Our mother would make us whistle while we picked to be sure we weren’t eating all the berries,” recalls Peggy with a laugh. It’s that sense of simplicity that Jens envisioned when building the home and one the family strives to hold onto today. When fixes are made to the house, such as the shingles and chimney that were replaced over the years, they are done carefully and deliberately, so as not to upset the home’s character. In a world where “bigger is better” is the preferred model for just about everything, preserving the house’s unique charm takes its own kind of work, Sven says. “You have to force a house like this. People want to come in and update, make changes that would make it better. But for everyone in our family, it’s a really special place and we want to keep it the way it is.”