Behind the Scenes: Savoring Federal Hill

Cindy Salvato started Federal Hill tours as an incentive to lure her Johnson and Wales University pastry arts students to class. “I said, ‘If we have perfect attendance, I’ll bring you to the Hill, introduce you to my friends and we’ll have something to eat,’ ” she says. Bribery – in the form of food – always works, and thankfully for us, we can now reap the benefits of what has evolved into her Savoring Federal Hill tour. Salvato also served as Andrew Zimmern's Federal Hill tour guide for the recently aired Rhode Island episode of "Bizarre Foods America."

I meet Salvato at the fountain in DePasquale Square, where I learn all about the renaming of the street and the history of the neighborhood. In the late 1800s and early 1900s, more than 54,000 Italians settled on Federal Hill. “Now there are more Italians per capita than in any other state in the union,” she says. And Salvato, who wears trademark fork and spoon earrings, appears to know them all. Wandering from shop to shop, she greets every person by name, and they kindly offer samples of everything from prosciutto and cheese to olives and wine.

The excursion isn’t just for tourists. Locals learn insider secrets about which shops are the best for particular items, and what to look for in terms of authenticity. In colder months, the tour begins at Caffe Dolce Vita, where guests enjoy coffee and cookies before setting out for the tour. Below, we share Salvato’s best secrets for food shopping on the Hill. 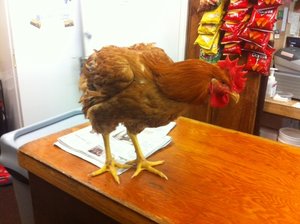 Antonelli’s Poultry has existed since 1853 in the same spot where it resides now, and they’ve hardly changed a thing. Shop here for the freshest – read, still breathing – poultry money can buy. Cages in the back of the store hold live chickens, ducks, quail, geese, turkeys and more and you can pick out a bird you like and have it plucked and primed on the spot. They also have baby chicks available for raising, so you can eventually have your own supply of fresh eggs at home. Poultry comes from Rhody Fresh and Stamp Egg Farm in Greenville, a free-range farm. 62 DePasquale Sq., Providence, 421-8739. 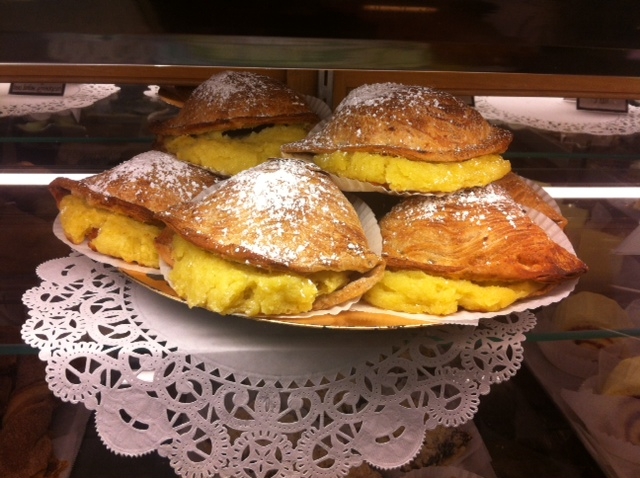 The bakery was founded by Luigi Scialo in 1916, and now it’s run by his two daughters, Lois Ellis and Carol Gaeta. “They never thought they’d take over the bakery, but here they are,” says Salvato. The item to savor here is sfogliatelle, made from scratch every day. “It takes two to three days to make the shell,” Salvato says. The pastry dough is shaped to look like a clam shell and stuffed with semolina filling; very fitting for Rhode Island. Guests also get a behind-the-scenes tour that includes coffee and cookies and a look at the massive brick oven. 257 Atwells Ave., Providence, 421-0986, scialobakery.com. 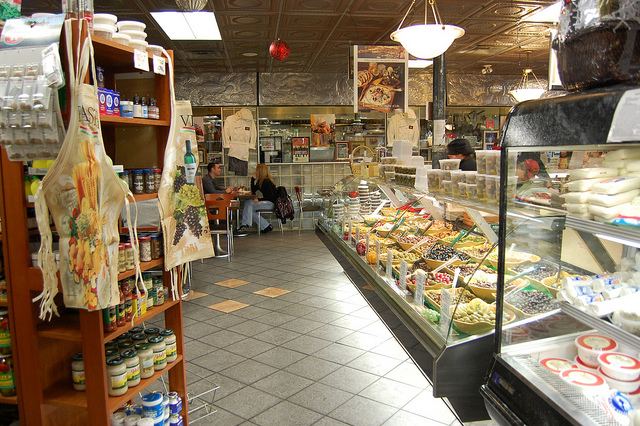 The store originally began as a small pasta-making shop, but when the old Ben Franklin pharmacy became vacant, Venda owner Alan Costantino bought it and turned it into his dream store. Here, we get a lesson in prosciutto, antipasti and parmigiano at the various food counters within the shop. Look for the D.O.P. certification on Italian cheeses, canned tomatoes and meat packaging, which means it’s an authentic regional product of Italy, made using time-honored techniques. San Daniele prosciutto is a top choice. Then it’s on to the antipasti section, where olives await. Three great varieties include Castel Vetrano and Cerignola from Italy and Lucques, from France. In the cheese department, we learn that the fresh mozzarella is handmade nearby, and better than any pre-packaged varieties. And did you know the difference between parmigiano reggiano and pecorino? Parmiagiano reggiano is made with cow’s milk, while pecorino uses sheep’s milk. “See the white spots on there? Those are dried crystals,” says Salvato. “You want that.” 265 Atwells Ave., Providence, 421-9105, vendaravioli.com. 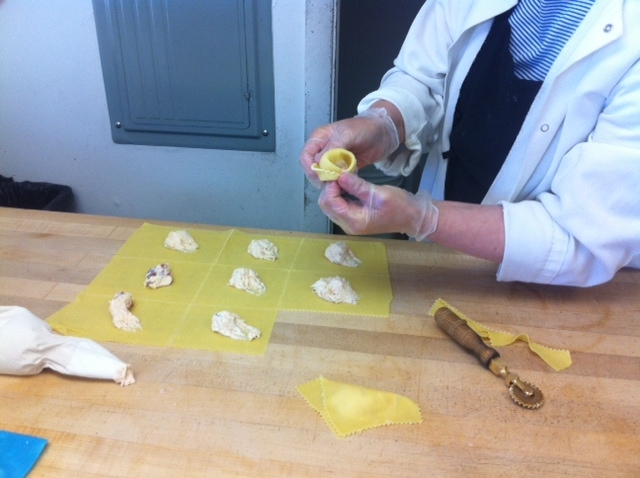 Across the street, we get a behind-the-scenes look at the making of Venda’s flagship product: ravioli and other handmade pastas. Three women work with pre-rolled flat sheets of pasta dough. The fillings are made fresh each morning by Bianca. This time, it’s lobster, and the ladies are busy placing dollops on each sheet, then using pasta cutters and pressing with fingers to form each agnolotti. Each day, they make 300 to 400 dozen, but around Christmas time, they produce thousands of dozens a day. When cooking, gently boil them for several minutes, then remove with a slotted spoon. “The best way to serve them; just butter,” says Salvato. 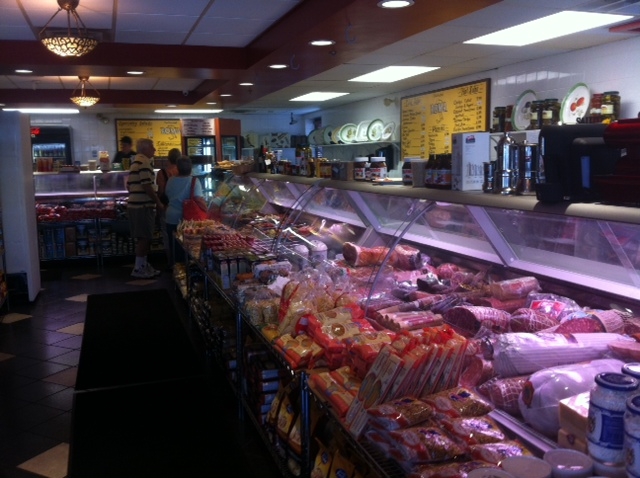 At Roma, we learn just what makes San Marzano tomatoes so special. It’s the volcanic soil of San Marzano that gives these juicy reds their sweet, unmistakable flavor. Then we learn all about smoked meats and D.O.P. seals. The butcher points out brandings on meat that ensure authenticity. He also suggests choosing prosciutto made locally in Pascoag by Daniele, Inc. They have new line that smokes meat from pigs raised at local farms. In the middle of the room, away from the light of the windows, there’s a shelf of olive oils. Salvato shares with us what to look for when choosing a quality bottle. “Make sure it’s extra virgin, and look for a date. If there’s no date, leave it on the shelf,” she says. She also recommends choosing a dark bottle that’s stored away from light and heat. “That will cause the oil to break down and go rancid faster,” she says. But if you’re looking for unfiltered olive oil, clear bottles are fine. Hold it up to the light and make sure the liquid is hazy. Roma also has all kinds of prepared foods to take for lunch or dinner, and a giant brick oven for making pizzas and fresh bread. Don’t miss the dessert counter. “They have the best cannoli,” says Salvato. 310 Atwells Ave., Providence, 331-5000, romaprov.com. 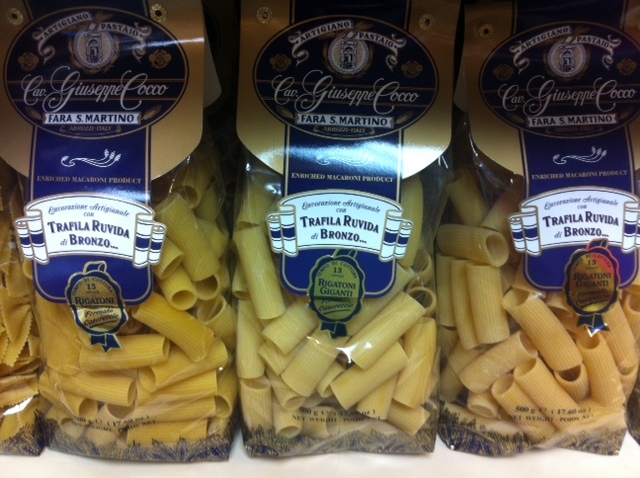 The next stop is Tony’s Colonial, owned by Tony and Gina DiCicco. “The television is always on, whether it’s politics, soccer or some crazy Italian show,” says Salvato. The community shop is also the best spot on the Hill to buy dry pasta. Salvato recommends choosing a brand that uses dye made from bronze. Dye doesn’t mean coloring; they are the cutting tools used for shaping pasta. You want dye made from bronze because “as the dough goes through, it roughens up the sides of the pasta, so that sauce will stick to it better.” She points out several packages with “di Bronzo” on the front. When cooking, salt should always be added to boiling water. “It brings out the flavor of the wheat,” she explains. Cook pasta until it’s al dente, strain it, then return it to the pot and cook it a little longer with some sauce to infuse the sauce into the pasta. Then, top with more sauce. This is also the place to go for sausage. Made in Rhode Island by the Graziano family, it comes in huge pinwheels, perfect for grilling. Salvato also gave us a lesson in balsamic vinegar. Look for D.O.P.-certified products with the word “traditionale” printed on it. The good stuff comes in twenty-five, fifty, seventy-five and 100-year-old aged varieties, and can run $65 to $185. Villa Manodori is a good brand to buy, made by a chef in Milan. 311 Atwells Ave., Providence, 621-8675, tonyscolonial.mybigcommerce.com. 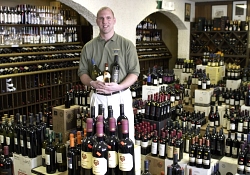 The last stop on the tour involves wine tasting. The history of Gasbarro’s Wines spans 115 years, surviving even Prohibition (when it became a malt and hop merchant, and sold wine-making equipment) and multiple relocations. In the 1960s, Ugo Gasbarro and his son, Lombard Gasbarro, traveled to Italy and brought back wines that had never been offered in the United States. Now, fourth-generation business owner Mark Gasbarro runs the shop, which features free tastings for the public with winemakers twice a month. You can sign up for their email newsletter to learn more. The shop has an incredible Italian wine selection. I hunted down a particular winery I visited in Tuscany, Casanova di Neri, and sure enough, they had the brunello stocked. They also have an Italian aperitif section, including limoncello, amaretto and Fernet Branca, as well as Aperol, which can be mixed with prosecco for an Aperol Spriz, my personal favorite Italian drink. 361 Atwells Ave., Providence, 421-4170, gasbarros.com.