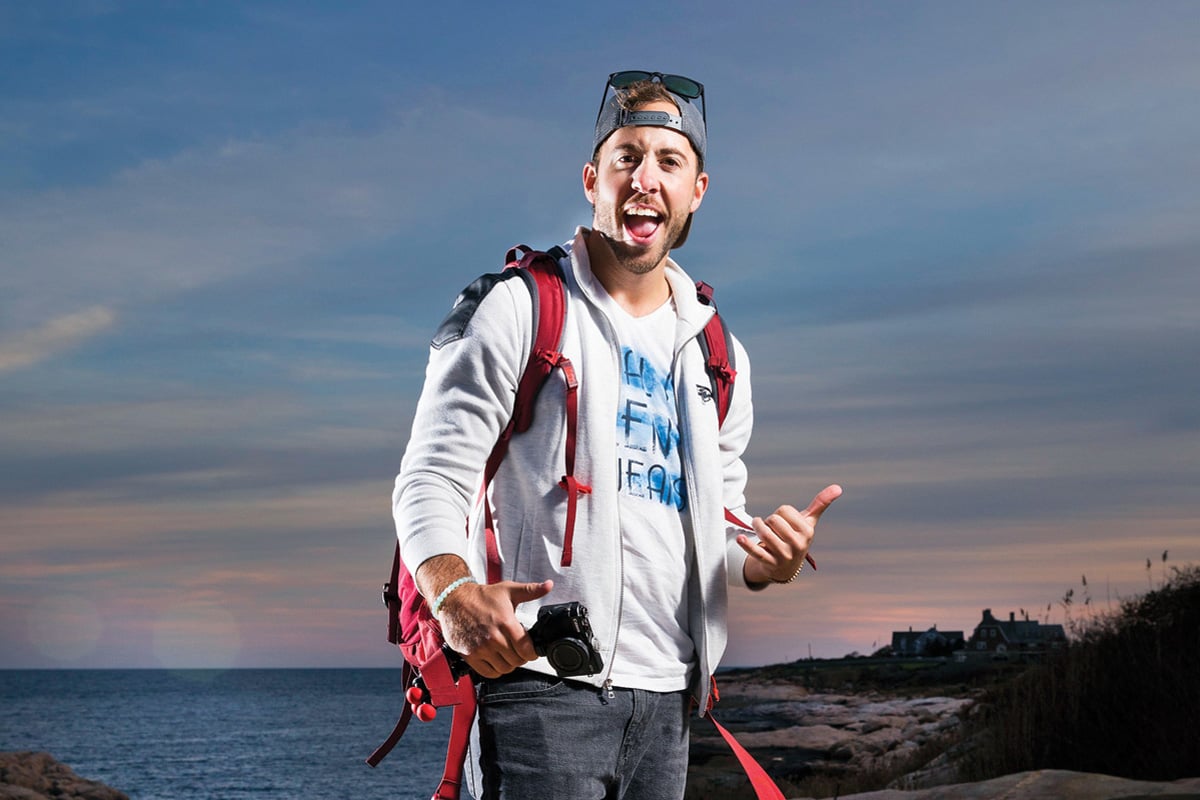 Have the day off? Maybe you should replicate “The Most Rhody Day Ever.” For his YouTube channel, Molives TV, Lincoln native and Southwest Airlines flight attendant Matthew Oliveira flew in fan Gary Vaughan from Atlanta, Georgia, to experience the best of the Ocean State in less than twenty-four hours. Oliveira, twenty-five, created an eighteen-minute video that highlights everything from a 5:30 a.m. sunrise in Narragansett, a moped ride on Block Island and a jaunt on Newport’s Cliff Walk, to visits to popular food spots like Allie’s Donuts, Champlin’s, Iggy’s, New York System, Del’s and Mr. Lemon. He ended the day with a selfie with the Big Blue Bug, a ball game at McCoy Stadium and a visit to a bar where you’ll surely run into someone from high school. His reason for doing it? Since he was an infant, Oliveira has lived with cystic fibrosis. “I’ve been trying to get the most out of life at a young age,” he says. He became a flight attendant and travels the world on standby as a perk of the job. For his YouTube channel, he flies to mystery locations voted on by his subscribers and makes videos out of his adventures. “The Most Rhody Day Ever” pays tribute to his favorite spot in the entire world: Narragansett. “I think experiences are more valuable than material things,” he says. “I’d rather own little and see the world than own the world and see little of it.” 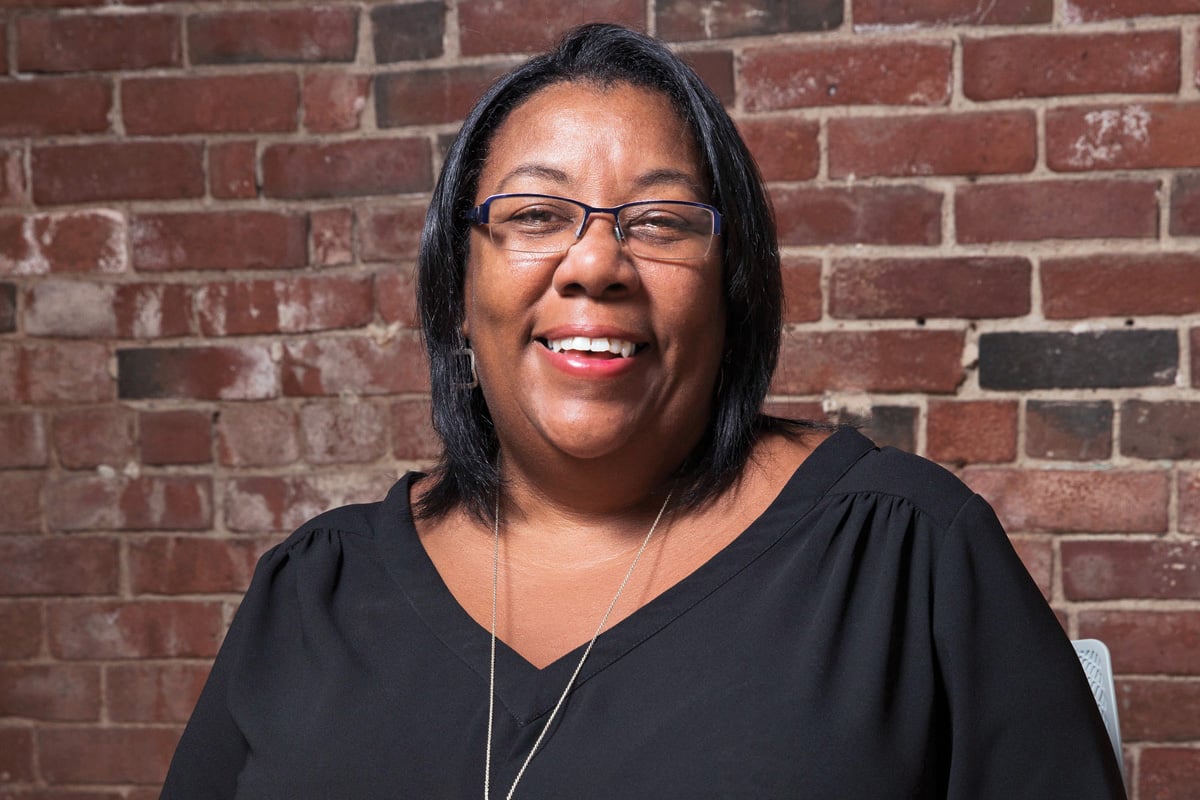 Ditra Edwards’s mother always told her: “Come back home and do the work that you do here.” Edwards, a Providence native and nonprofit careerist, has strengthened communities of color for decades. When her mom was diagnosed with dementia, Edwards left D.C. and returned to Rhode Island to help care for her. Now, she is fulfilling her mother’s wish. In April, Edwards was awarded a $300,000 Rhode Island Innovation Fellowship from the Rhode Island Foundation to launch Sista Fire RI, a network for young women of color that cultivates a discourse about issues affecting their communities. Over the summer, Edwards and her team interviewed dozens of young women about their civic priorities. Several themes emerged: affordable housing, employment, childcare, health care. “These young women have such fire about what they want to do but had no way to organize,” Edwards says. “I saw their leadership right in front of me. I just want to be able to invest in and support that — not just what I’m doing; what we’re able to do together.” 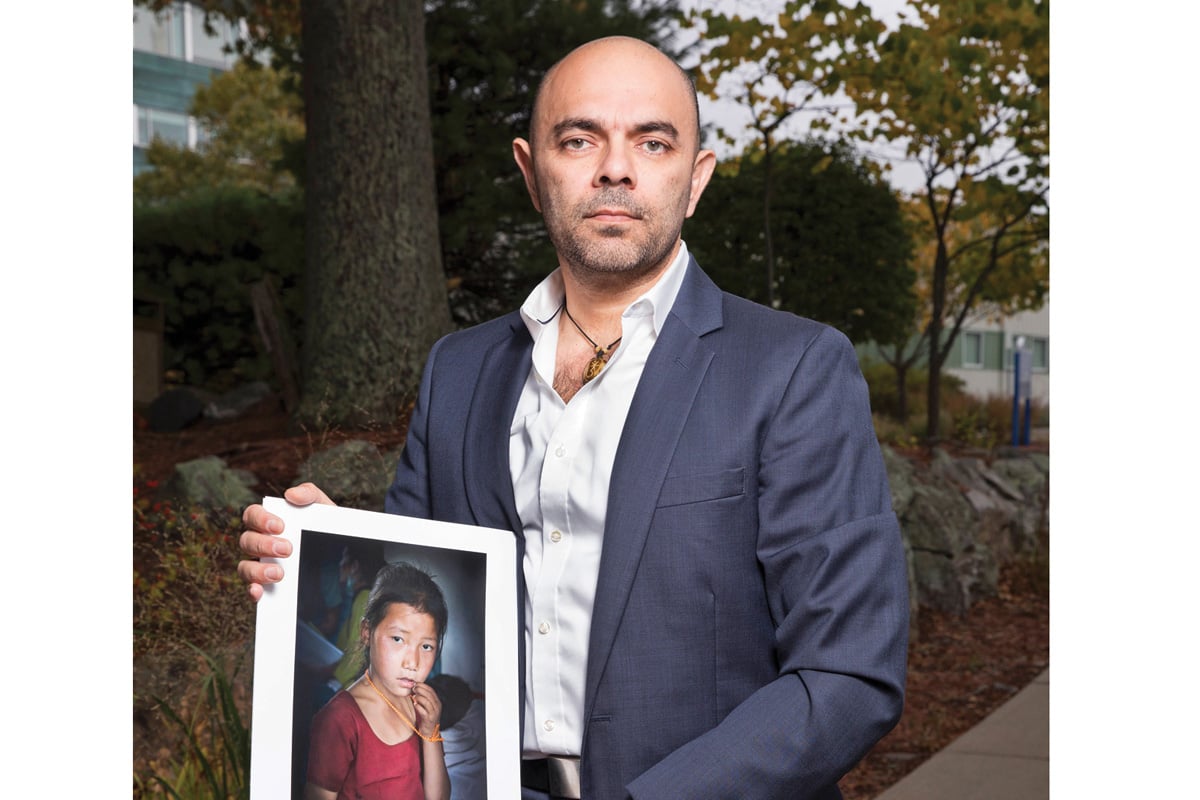 Dr. Ehsun Mirza, a critical care doctor at Kent County Hospital since 2003, is not intimidated by difficult work; he runs towards it. On top of his day job at Kent’s intensive care unit, Mirza regularly returns to his native Pakistan to volunteer in medical camps and help build schools in remote villages. In 2015, after the 8.1 magnitude earthquake struck Nepal, Mirza rushed there to offer a hand. “I do believe when the calling comes, somebody has to stand up,” he says.

“Langevin said: “I only have one pass and I want to take you with me,’ ” Mirza says. “I think he was trying to show the country that it is not fair to paint an entire genre of people. Fifty thousand physicians in this country are Muslims. We are police officers, we are EMTs who died in 9/11, we are teachers, librarians. We pay our taxes, we are raising our children in a civilized way. We are educated and we are serving our communities. We are doing what our patriotic duty is.”

The same week as Trump’s address to Congress, Mirza, who is Muslim, helped organize an interfaith rally at Providence’s Rhode Island Holocaust Memorial. The rally served as a response to a string of anti-Semitic acts that swept the nation.

“It was brutally cold but everyone stuck around; we had a great interfaith show-up,” says Mirza of the rally, which drew 300 people. “I’m grateful to be a part of this point in history right now. It is very historic.”

Mirza’s leadership position in Rhode Island’s interfaith community rose from his own experiences as a Muslim doctor, husband and father living in the United States. Mirza emigrated from Pakistan to complete a residency program at the Harrisburg Hospital in Pennsylvania. In 1999, he and his wife, Saira Hussain, who is also a doctor, moved to Rhode Island to continue their studies. They never left; two of their three children were born in Rhode Island.

“I’m happy to be in Rhode Island because in no other place can you connect to so many people at one time,” says Mirza, who lives in East Greenwich. “It was destiny that brought me here in 1999. My family, my children, my wife: We make sure we give back because the community has given so much to us.”

The family volunteers with the Mae Organization for the Homeless, and Mirza also works with Omar Bah at the Refugee Dream Center, which supports refugees who were resettled in Rhode Island. In 2015, after the terrorist attack in San Bernadino, California, Mirza organized a rally at Kennedy Plaza denouncing the killings.

“If I am quiet, what am I teaching my children?” Mirza says. “And I’m not the only one doing it. Just the fact that I can gather so many people around me with the drop of a hat with one Facebook post — that means there are so many people willing to show up and take this position. They are all leaders.”

Mirza adds that his volunteerism wouldn’t be possible without support from his wife, Saira.

“A lot of the credit should go to her. She’s an excellent connector,” he says. “She motivates me to do things that I wouldn’t otherwise. If I am the body of the car, she is the engine and transmission.”

Mirza spreads his appreciation a little further, from his kids to his hospital coworkers to the interfaith community to ordinary citizens in Rhode Island.

“It’s teamwork, whether I do it in the ICU or in life,” he says. “We are not individual beings. We are a collective. That’s the only way we can become better and stronger. So I’m happy to take this honor on behalf of everyone who has contributed. How’s that?”