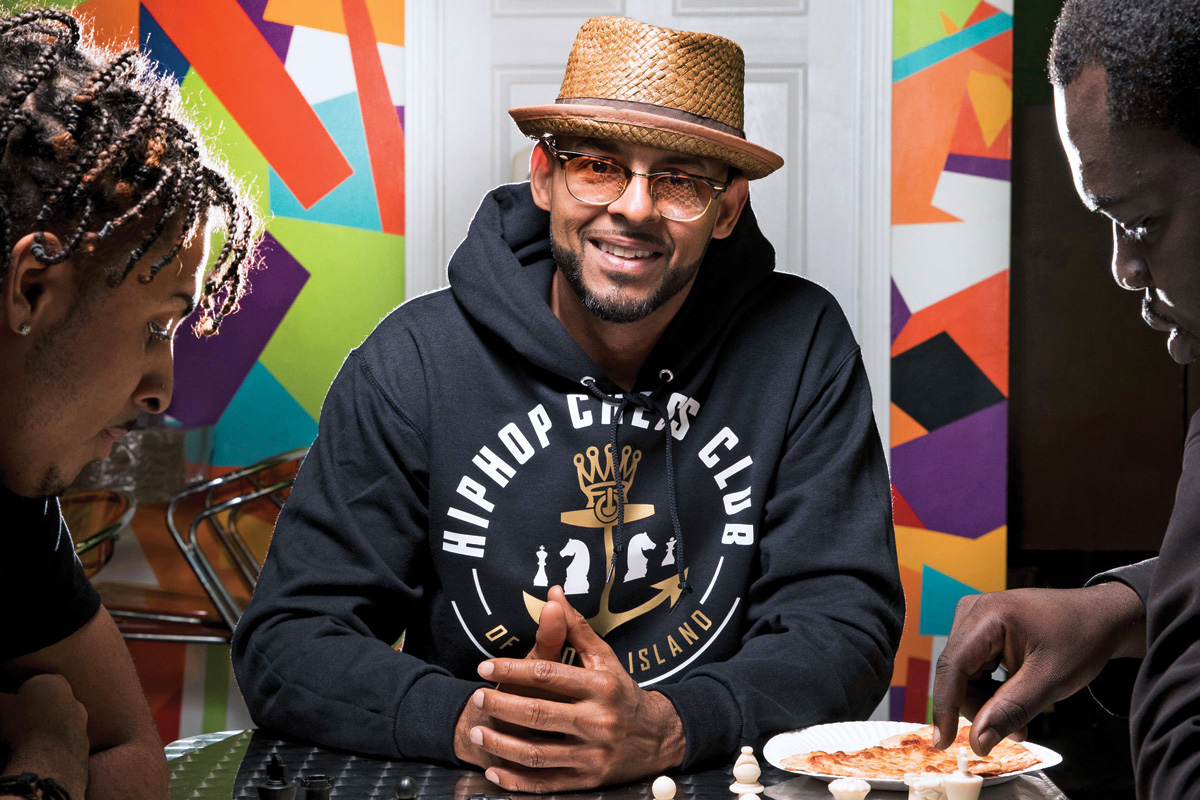 At first glance, chess and hip hop couldn’t be more different, but up close they’re remarkably alike: Both require precision, patience and the ability to think ahead.

Eric Mercado has been a hip hop artist and die-hard chess player for more than twenty years and combined both passions when he founded the Hip Hop Chess Club of Providence earlier this year.

Dozens of neighborhood kids and adults show up to play or learn to play chess every Monday night at La Broa, a pizza joint in South Providence, not far from where he grew up. People don’t want to leave at the end of the evening, and the response from the community has been overwhelming, and humbling, he says.

Chess, a complex game of strategy, dates back 1,500 years, and is hard to pick up. Still, parents come because it’s something they can enjoy with their children. Kids come because of the intriguing, precise nature of rap and the funky instrumentals of hip hop. When they realize chess is something they can get into, they hear the beat in the background and it makes it easier for them to learn and not feel pressure or be intimidated, Mercado says.

“I talk to kids about life, school, encourage them to do better, have respect for each other and their elders,” he says.

Mercado didn’t always recognize the actions-have-consequences connection, a reality that landed him behind bars. “I wouldn’t have been getting into fights if I’d thought about it after, getting arrested, costing me my freedom, how it affects your life afterwards,” he says.

He learned chess at age twenty-one, when he was in prison, watching other inmates play. Now forty-three, he reflects on how the game has changed him. “We live in a world where we’re very impulsive,” he says. “Chess helps eliminate that impulsiveness and think what’s best for you.”

Mercado, who’s a hip hop performer, has no outside funding, and subsidizes the club himself. He has opened hip hop chess clubs in Connecticut and Wisconsin and hopes to expand further across the country. “If it can work here,” he says, “it can work anywhere.” 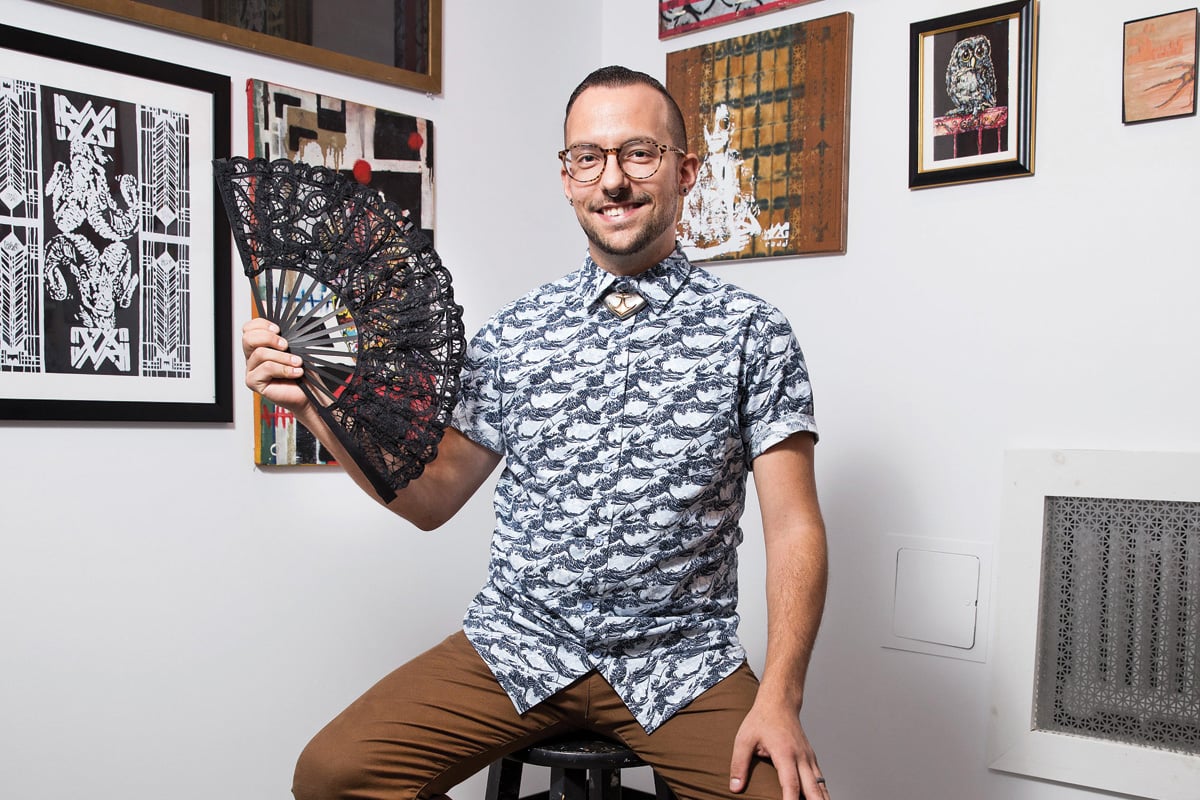 A fan, a rainbow pin and a heap of confidence: That’s all Nikos Giannopoulos needed to break the Internet last spring. The 2017 Rhode Island Teacher of the Year and a special education instructor at Woonsocket’s Beacon Charter High School for the Arts, Giannopoulos — who is openly gay — says he initially felt nervous about one aspect of the honor: a meet-and-greet with President Donald Trump and First Lady Melania Trump at the White House. “I talked to my students before going and they were all like: ‘Just queer it up,’ ” he says. So right before his photo op with the Trumps, Giannopoulos popped open a black lace fan, his signature accessory, and struck a pose. “I definitely wanted to represent myself and my students,” Giannopoulos says. “I knew the people I cared about most would love it.” So, too, did the thousands of strangers who shared his photo on social media. Giannopoulos says the attention was “really, really humbling. So many people in the world will tell LGBT people how they can represent themselves in public. I wanted to show my students that even in the Oval Office — even in the face of someone who might not support you — you can be who you are.” As for the black fan, Giannopoulos says he took it with him to Portugal over the summer. “It’s big and very practical.” 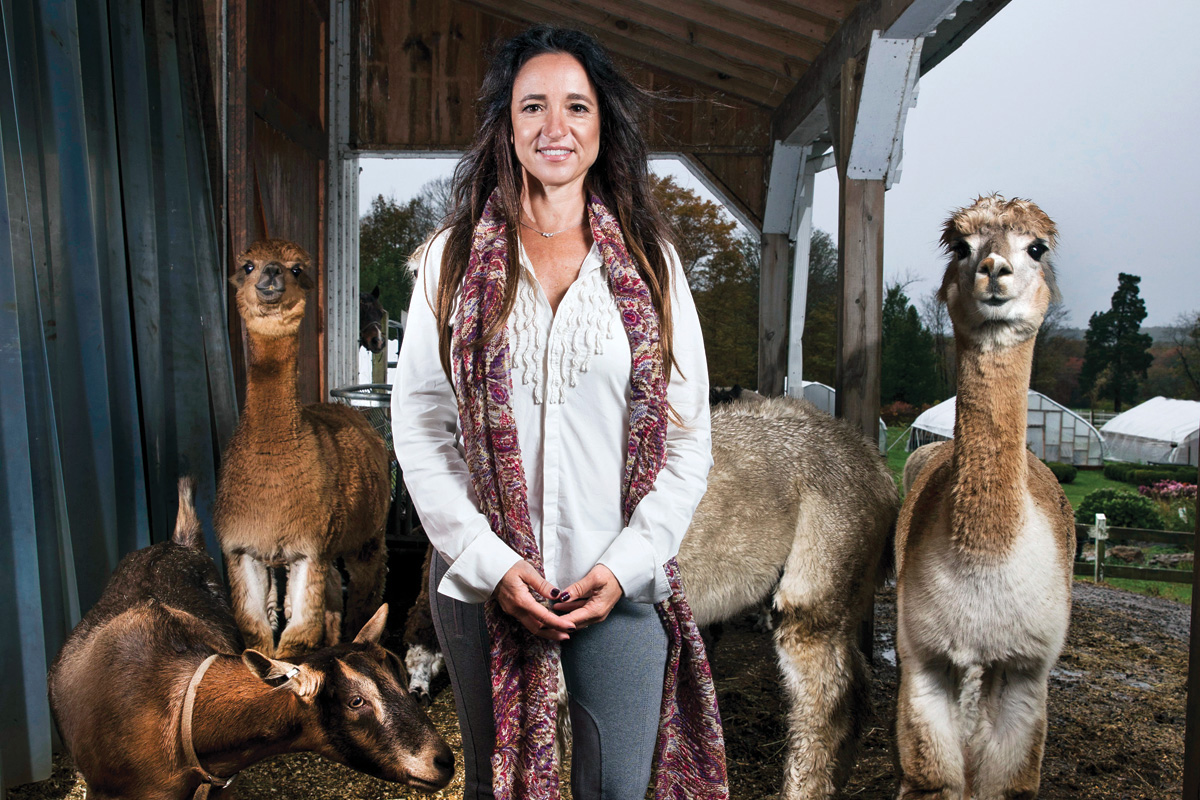 Wendy Taylor got the call last summer from an ASPCA official: could she come to Westport and help rescue 1,200 animals discovered in horrific conditions on a tenant farm? When she arrived, she says, it was an awful scene. “With a situation like that, you have to put blinders on to save the ones you save.”

Taylor spent six days transporting sick and emaciated goats, sheep, dogs, rabbits and horses to a safe haven. She wound up fostering sixty-seven of them herself — pheasants, ducks, quails, partridges and even thirty-nine Japanese koi — at West Place Animal Sanctuary, the nonprofit Tiverton refuge she’d created years before. After being rehabbed, most were returned to
the wild.

West Place cares for injured and orphaned wild birds as well as farm animals and abandoned horses. This fall, swans, turkeys, pheasants, chickens, a pony and an alpaca are among Taylor’s 200-plus long-term guests.

West Place wasn’t always this brimming. In 2003, Taylor was at her law office when she learned her house was on fire, causing extensive damage. Worse, her beloved pets — two dogs, six cats and a goat — perished. “Losing possessions is one thing,” she says. “Animals is quite another.”

Devastated, she considered donating to an animal welfare foundation in their honor but decided, instead, to start her own, focusing on small farm animals, like sheep and goats, as well as a baby starling she rehabbed and named Skylar. That triggered her interest in wild animals, she says.

For years, Taylor continued handling medical malpractice cases, representing clients including Lifespan and doctors. Every day, she was up at 5 a.m. running the sanctuary, along with volunteers, for several hours before and after work, arriving at the firm where she was managing partner just after 9 a.m., and not getting to bed till late in the evening.

Over time, the line between working at the sanctuary and practicing law started to blur. It was common to see Taylor wheeling two hand trucks with animal carriers, five to six feet high, carrying baby song birds, in and out of the court house and her office. “One time, I took a deposition with two baby birds under my desk,” she says. “The other lawyers thought I was the craziest person they ever met.”

“Baby song birds need to eat every fifteen minutes and they chirp when they’re hungry,” she explains. “Clients could hear them when I was on the phone and I’d say I have my window open. After a year, I realized this wasn’t acceptable so I transitioned to water fowl and game birds. They’re pretty sufficient. You could leave them most of day.”

Five years ago, she pretty much wrapped up her practice although she still has a handful of clients. She jokes that as a kid, watching “LA Law,” a TV show about a glitzy law firm, is the reason she became a lawyer. As for her life then versus now? “I love both, they’re both worthwhile,” she says. “I tried to help people as best I could as a lawyer; now I care for animals who can’t speak for themselves. My experience as a lawyer helps tremendously, with grant writing and balancing a budget, although with one profession I made a lot of money. Now I don’t make any money.”

Taylor and her husband, Thomas Humphrey, share their house with two dogs and a cat. Kind of pedestrian, she agrees, compared to the exotic menagerie residing at the sanctuary. “My husband helps with plumbing, electric, carpentry. He’s indispensible.”

The sanctuary’s annual budget is $100,000, funded through donations and foundations. Taylor hopes to launch a capital campaign to buy more land and buildings, and continues to assist the Rhode Island SPCA. “I don’t have kids, I don’t have that kind of legacy,” she says. “West Place will be our legacy.” 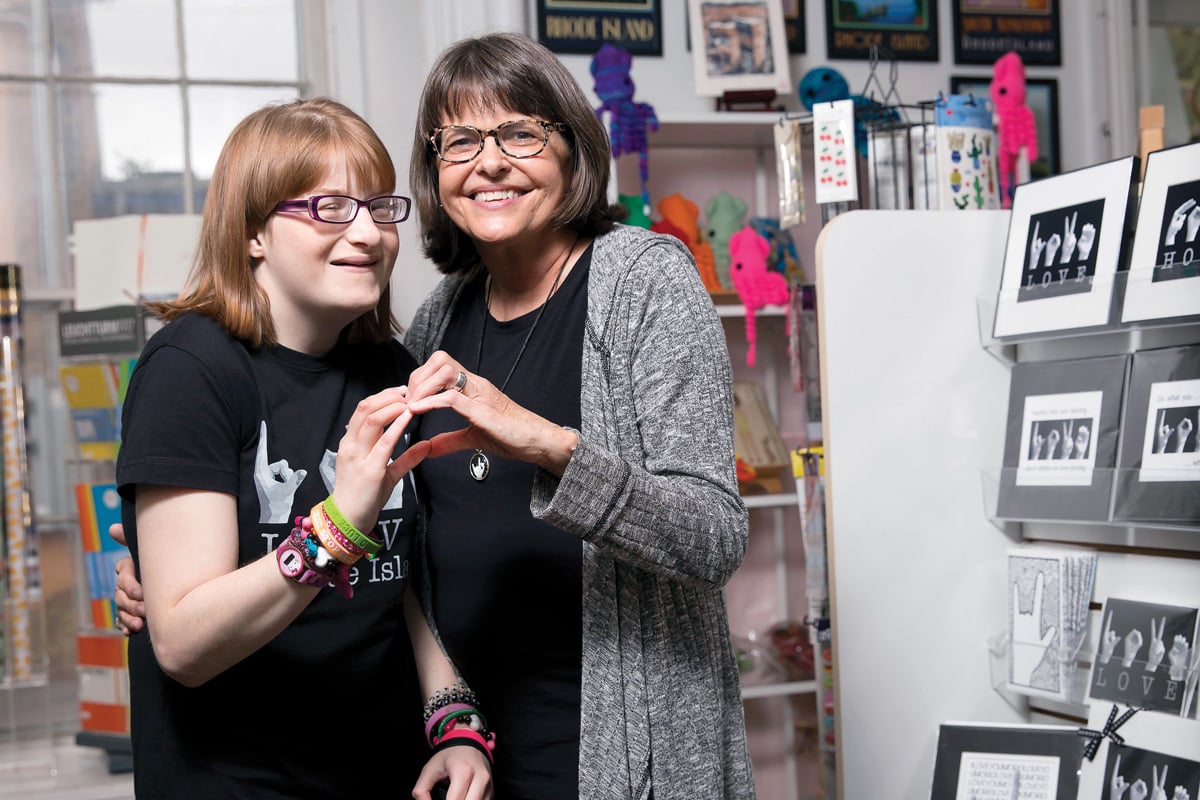 Emily Maxwell’s hands are in forty-seven states and several countries. The twenty-five-year-old and her mother, Carolyn Maxwell, create Love Letters by Emily, a line of posters, cards and T-shirts that feature photos of Emily’s fingers signing the American Sign Language alphabet and Heart Hands images. Love and hope provide inspiration for all that they do. They sell the art through Etsy, which allows Emily to share her talents worldwide.

Emily was born with a congenital heart defect and lost her hearing as a result. The Heart Hands images hold special meaning for her as a survivor. The Maxwells — who are from Kingston — learned how to sign at the Rhode Island School of the Deaf, and Emily continued her education with a Teacher of the Deaf as part of her special education program in South Kingstown. During her last year of school, the teacher gave the family a gift of Emily’s hands spelling out “Love.”

“I just melted when I saw it,” says Carolyn.

The framed photo inspired Love Letters by Emily. At an East Greenwich coffee shop, Emily wears her Love Rhode Island T-shirt and presents a bag filled with some of her notecards and posters. She sits stroking her mother’s hair and bumping fists with her. A dozen colorful bracelets jangle on each wrist as she signs about everything that she’s planning to do that day. Carolyn’s a former kindergarten and first-grade teacher who dedicated her life to her daughter and son. “I sometimes refer to Emily as my kindergarten kid because that’s the skills we’ve got,” says Carolyn.

The family launched the business as a means for Emily to grow and learn and teach, after the school bus stopped coming, says Carolyn. It’s a labor of love because of the costs of materials, printing and shipping. While Carolyn takes the photographs and creates the designs, Emily puts together orders from their website, assembles packaging and helps with post office drops. She also interacts with customers by signing words and phrases through videos posted on social media. “If a holiday comes up, she shows people how to sign things like Merry Christmas,” says Carolyn. “Emily can be the teacher.”

Love Letters by Emily is available locally at the RISD Store, South County Art Supply, the Fayerweather House and BagelzURI.