Twenty-two years in and we continue to marvel at all the amazing design and construction work that goes on in our little state year after year. Amongst the bounty of entries, there is no shortage of eye-catching projects and interesting, sometimes even heartwarming, stories behind them. Lucky for us, the challenge of picking the winners is on other, much more qualified shoulders. This year those shoulders belonged to David Barkin, chief architect for the state of Connecticut; Massachusetts-based architect Natasha Espada, who heads her own firm, Studio ENEE; and interior designer Tiffany LeBlanc of LeBlanc Design in Waltham, Massachusetts. Together, they chose fifteen entries that showcase the best of what Rhode Island’s design community has to offer. Congratulations to the well-deserved winners! 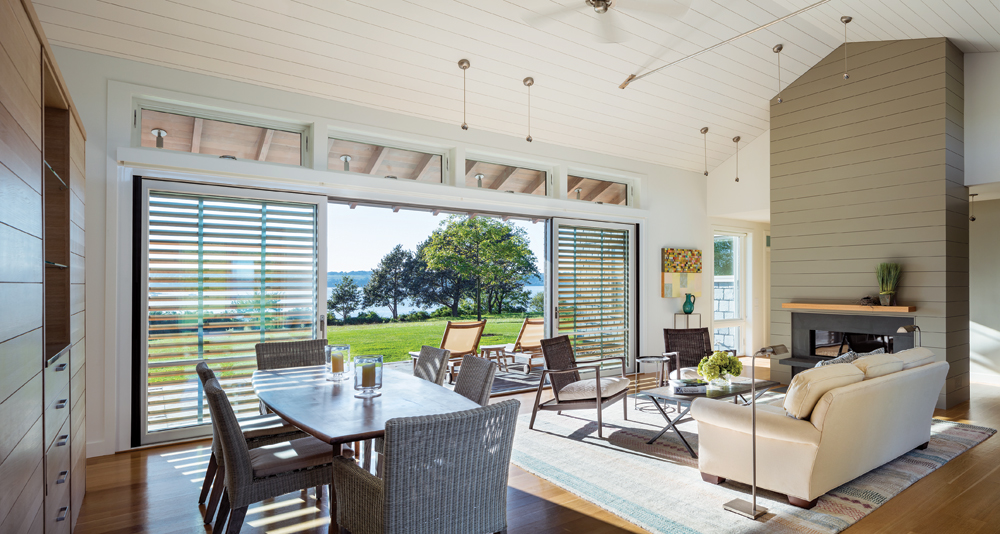 Location was key for these clients, avid windsurfers who settled on Little Compton’s Fogland Point for the site of their new home, drawn in by the prevailing summer breezes that funnel through by way of the Sakonnet River. Trying to make the most of the land as well as the sea, they tapped Estes/Twombly to design a home and garage-slash-boathouse that would allow them to do just that. Features throughout, like deep overhangs, porches, terraces and stone walls, create several outdoor spaces that the owners can enjoy in warmer months. Our judges described the modern home as “well-resolved and livable” and appreciated details like the sliding doors and louvered shutters that facilitate flow from the inside to outdoors. Overall, they found it to be a structure that “integrated into the landscape quite well.” Mission accomplished. 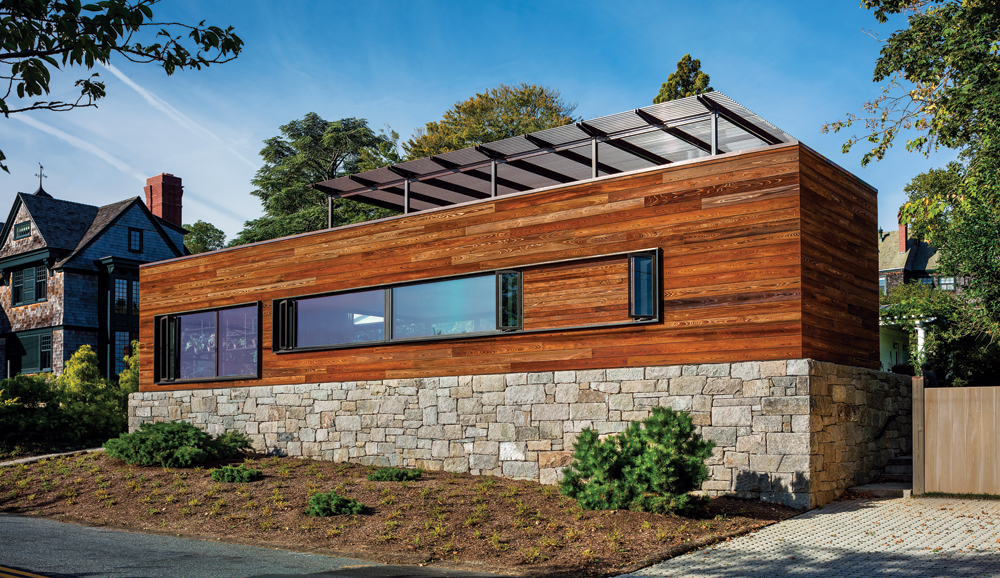 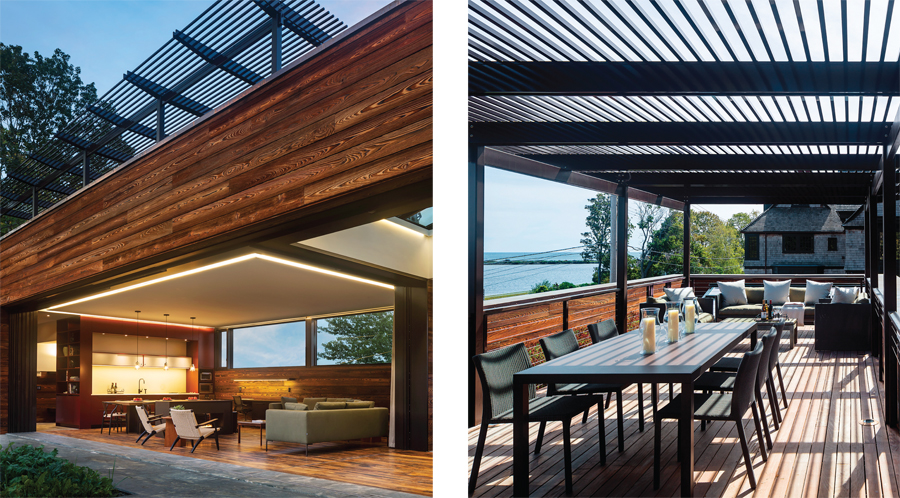 “When can we come over for wine on the roof?” our jury wanted to know as soon as they laid eyes on this Newport greenhouse-guesthouse combo. When Foster was tapped to design the structure, the challenge was creating a building that stood out but also complemented the existing buildings on the property, including a Peabody and Stearns-designed shingle-style house built in 1882 that serves as the centerpiece. Capitalizing on nearby ocean views while also maintaining privacy from the street were also goals. The result was a success on all counts, according to our jury, with a modern structure that’s chock full of well thought-out details — such as pocket doors that open onto a garden and lotus pond, and charred cypress siding — without feeling excessive.

Looking to add on to their circa-2008 modernist Little Compton house, the owners decided that a separate building with space for a photo studio, media room, exercise room, garage and lap pool was the way to go. Tucked into a corner of the property, this Estes/Twombly-designed structure imbues the modern flair of the main house, with plenty of open space and glass. Our jury appreciated the less-is-more-approach to this design, noting that the architects “knew when to stop,” as well as the way the structure remains true to its modern roots while also picking up elements, such as the fieldstone walls, of its more historical surroundings. 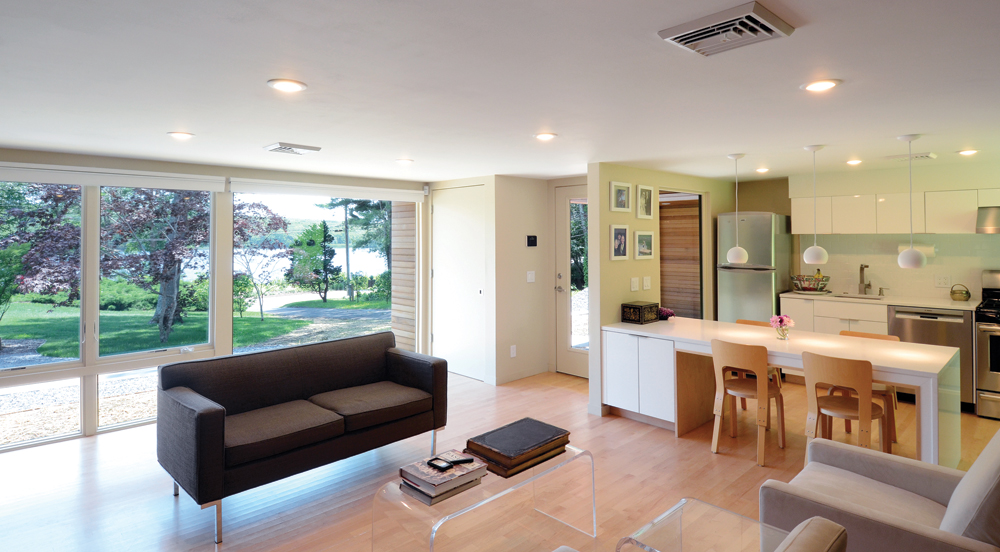 It’s said that necessity is the mother of invention. When 3six0 was tapped to create an in-law addition for this South County home that they had previously renovated, they instantly saw potential in the site of the home’s two-car garage. The result is a one-story structure that converses with the main house by way of red cedar paneling. Inside, the airy layout is simple and comfortable, complete with fireplace and built-in bookshelves. But perhaps more notable are the less noticeable details: All of the spaces are handicap accessible, with no steps to navigate, which means peace of mind for the homeowners that their parents will be able to enjoy many years in the new space. 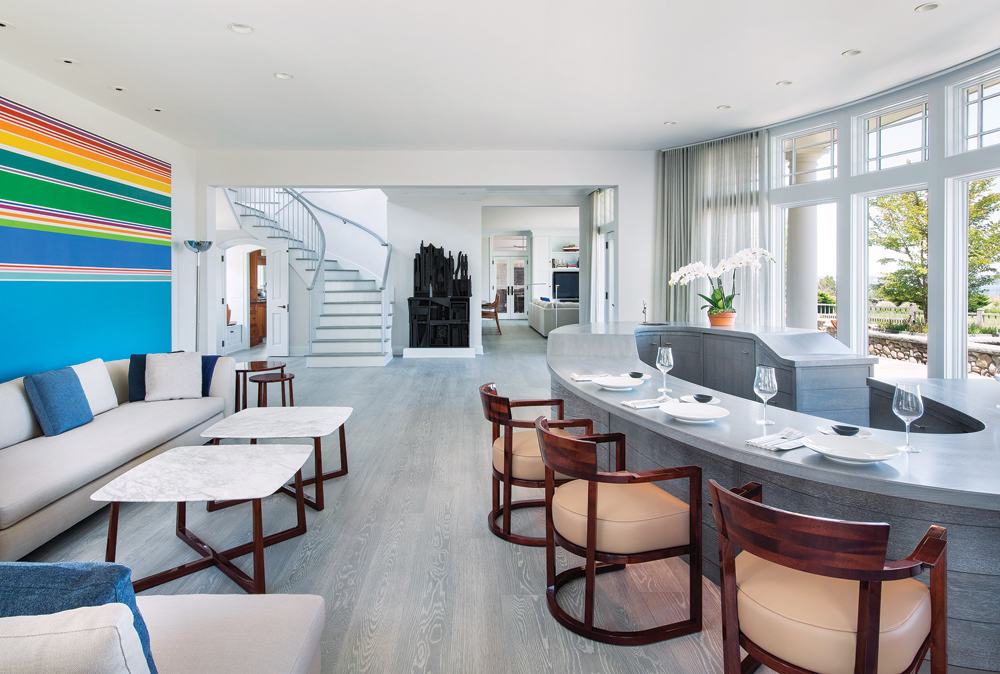 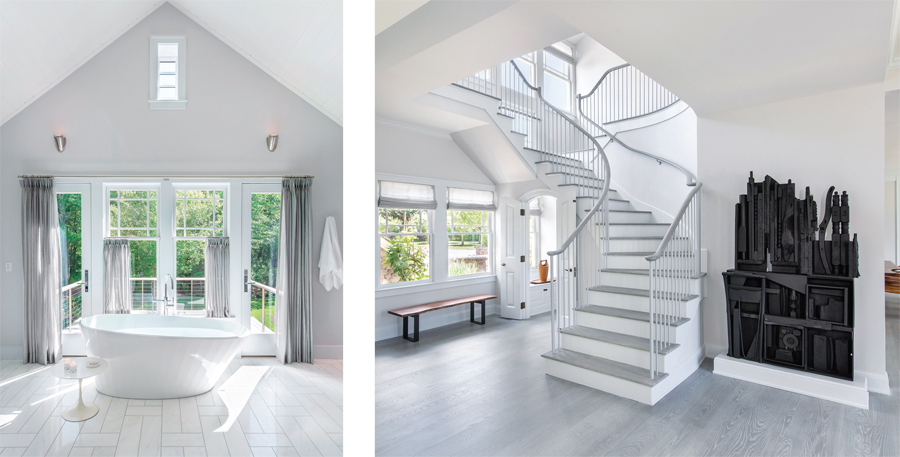 It’s not too often that an architect gets a “do-over” on a project, but that’s exactly what happened for Chris Arner. Ten years ago, he was charged with the renovation of the master suite and then watched as antique furniture was carted in to outfit the contemporary structure, a choice that Arner said “depressed” him. So when he recently got a call that the new owners would be seeking his help, he jumped at the chance to do right by the home. An elliptical bar for entertaining was added to the living room and updates were made to bring the home more in line with its coastal setting. Outside, gardens were expanded and a morning terrace was added off the master bath. The story of this renovation was what initially caught our judges’ attention, but the work spoke for itself. 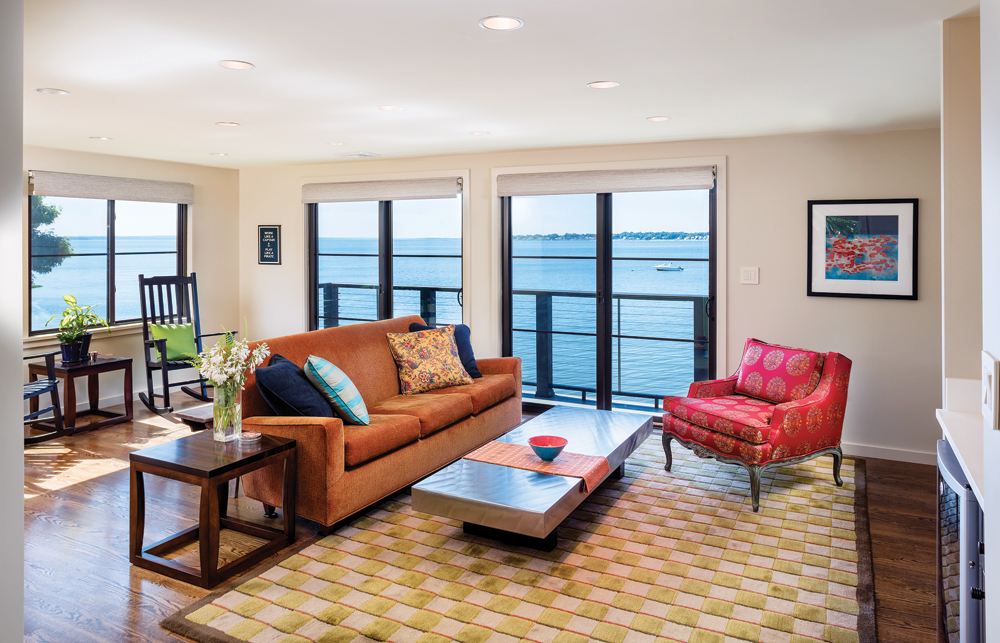 Tradition was a guiding element in the renovation of this oceanfront home. Having been in the family for two generations, the owners weren’t ready to give it up for something new. Lucky for them, the house also had loads of potential, starting with the can’t-beat-it location. And their sentimental leanings paid off in the form of a transformation that was repeatedly described as “remarkable” by our jurors. Reworking the layout to add a living room on the second floor as well as a back deck, and windows to the stairwell, architect Mary Brewster gave the owners a simple, straightforward structure that highlights the unobstructed water views and keeps this family’s traditions alive for generations to come.

IN THE DETAILS  l  GOLD 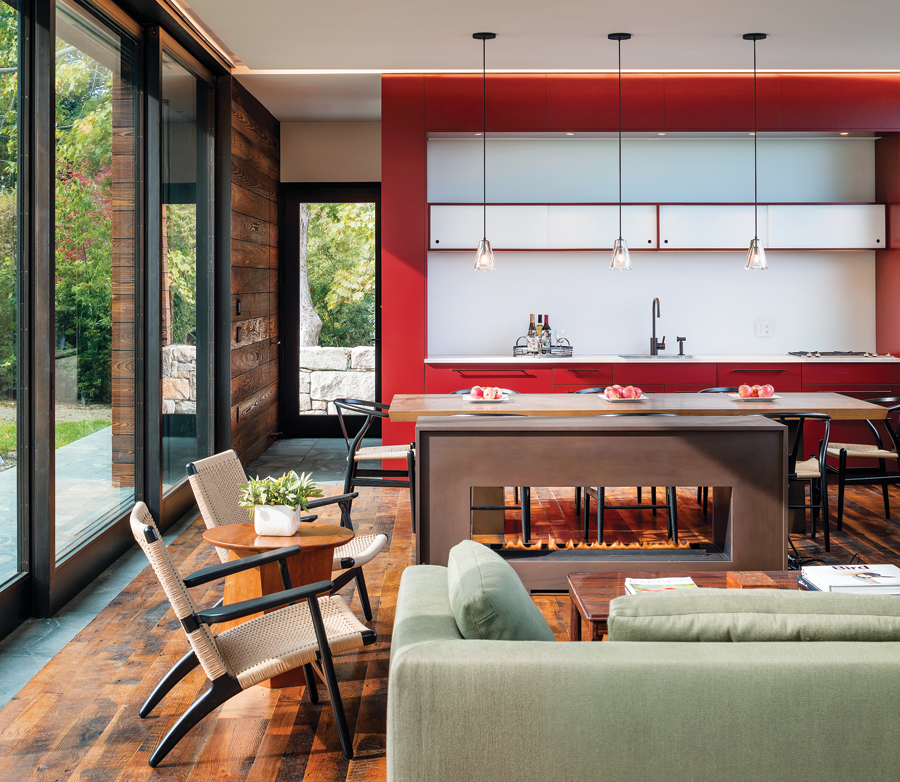 Much care was taken to make sure the outside of this modern outbuilding blended well not only with its historic surroundings, but with its interior, too. That goal was achieved with a palette of colors and materials that was simple enough to compete with the strong architectural design, yet also stand out for its richness. Our jury was quick to pick up on details like the carved stone sink in the greenhouse area and the halo lighting throughout. Other accents, like the granite foundation and red interior wall, were carefully chosen nods to materials used on the property’s main house. 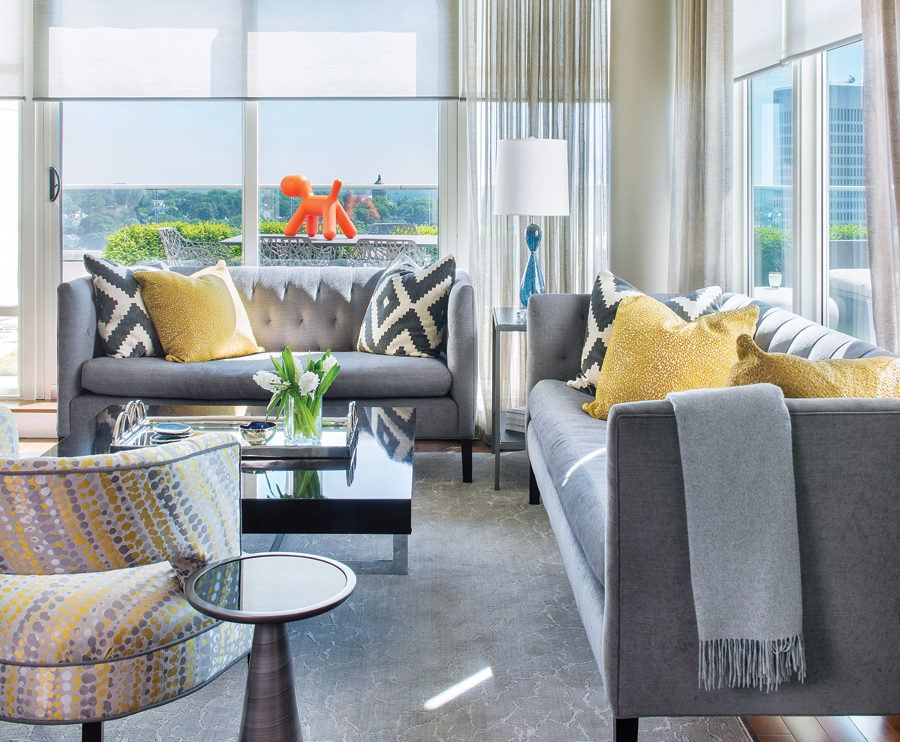 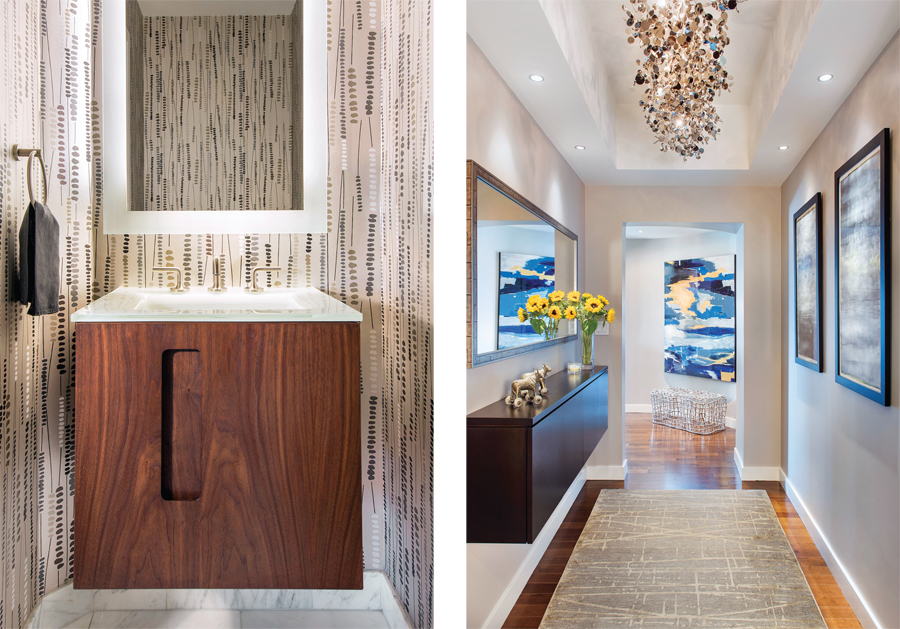 When Kelly Taylor was initially approached to work on this high-rise condo in the Residences at the Omni, she thought she was doing a simple “refresh” of the space. But once she got there, her keen designer eye saw the potential to take improvements beyond the basic paint job and furniture update that was ordered. Recognizing the need to bring more light into the home, Taylor added sconces, pendants and recessed lighting in the foyer and dining areas. Almost every surface in the unit got an update as well, resulting in a quieter, more calming color palette. The terrace, little more than a slab of concrete before, was warmed up with boxwoods and turf area rugs to make it an extension of the living space. 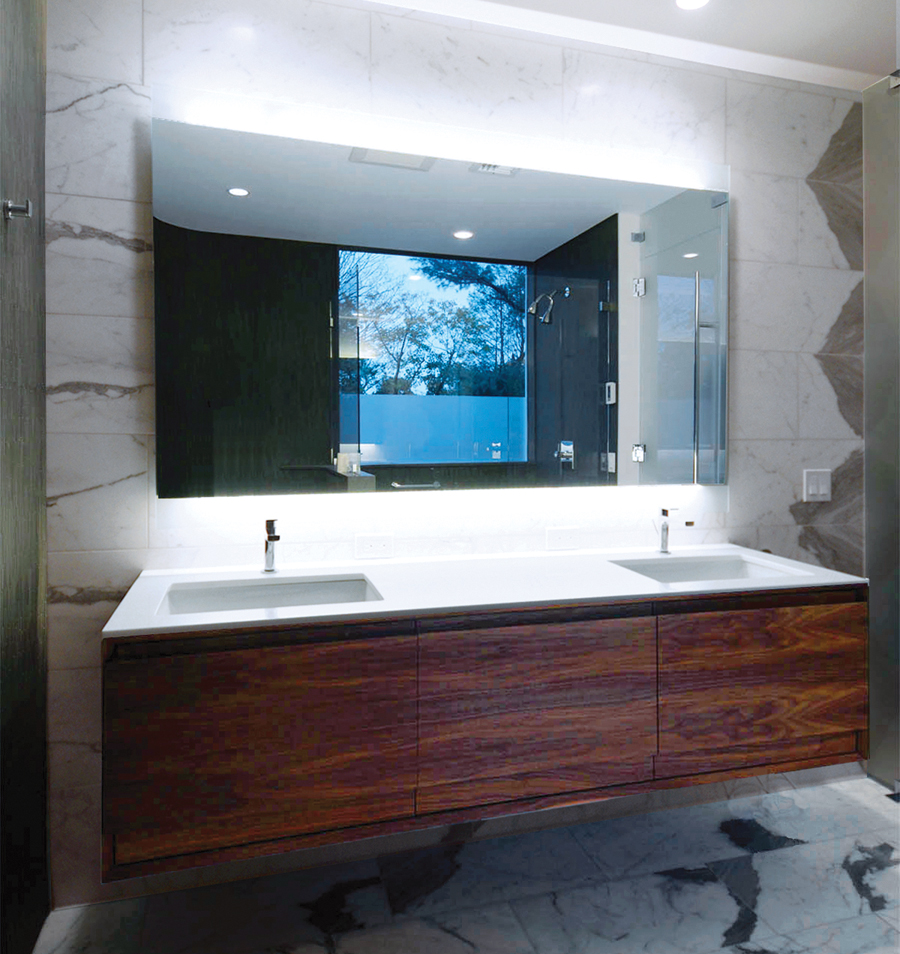 When the new owners of this nineteenth-century Barrington Victorian approached 3six0 to create new spaces that were better suited to their lifestyle, they were clear that not just any finishes would do. The kitchen was approached with two different areas in mind: a bolder cooking area, and a more muted sink design. The resulting space brings together a variety of new materials including lacquered panel pantry cabinets, soapstone counters and stainless steel with the original fir floor discovered during demolition. The bathroom brought together elements of light and dark through materials like basalt tile, a walnut vanity and a show-stopping statuary marble floor. Our jury praised the layering of textures, proving that mixing old and new can be a winning combination. 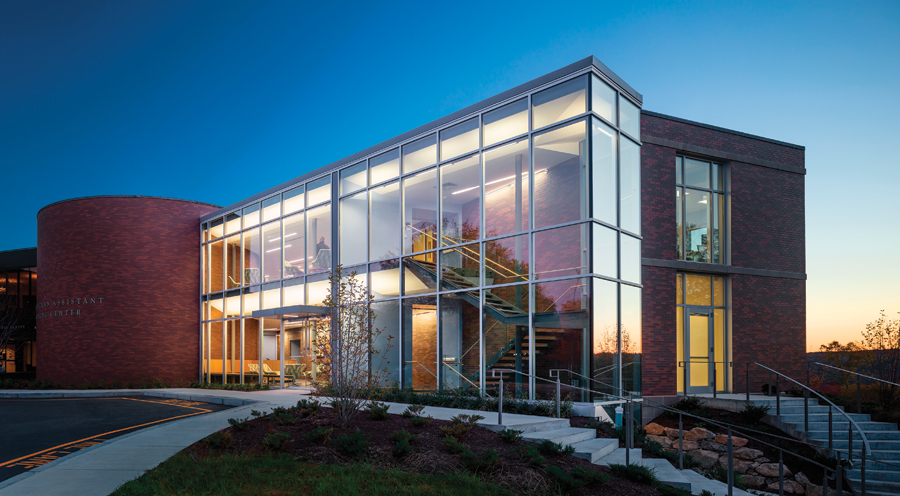 A growing campus is a testament to a learning institution’s academic strength, so it was only a matter of time before Bryant was looking for more room to house their innovative graduate physician assistant program. Rather than start from scratch, attention was turned to the school’s largest academic building, Unistructure, as the spot for an addition that the program could call home. Our jury praised the way LLB seamlessly combined the old brick facade with the new addition, where a glass entrance showcasing the lobby and staircase is now the building’s centerpiece. Inside, lounges, classrooms and simulated exam rooms come together to make for a student-focused space ready to welcome and train the next generation of medical professionals. 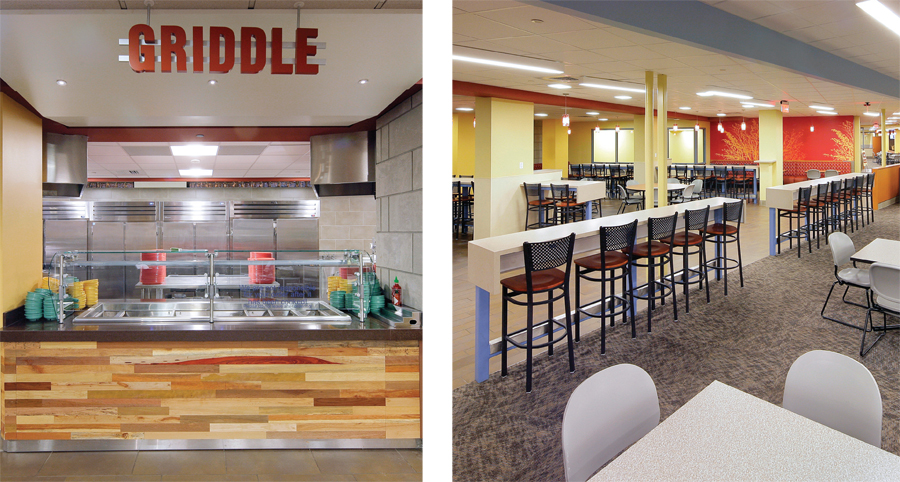 Most students would agree that food is one of the most important parts of the college experience. So it’s easy to imagine the excitement that swept across campus when the decision was made to renovate University of Rhode Island’s Butterfield Dining Hall after sixty years in operation. Designed to accommodate more diners and food options, the new space has increased capacity from 380 to 560 seats in multiple configurations. An added bonus is the new queuing area where students now line up inside to dodge inclement weather. Our jurors noted that the scale of the addition blended nicely with the existing dorm it’s attached to and appreciated the use of glass, which now brings in more natural light to the space than ever before. 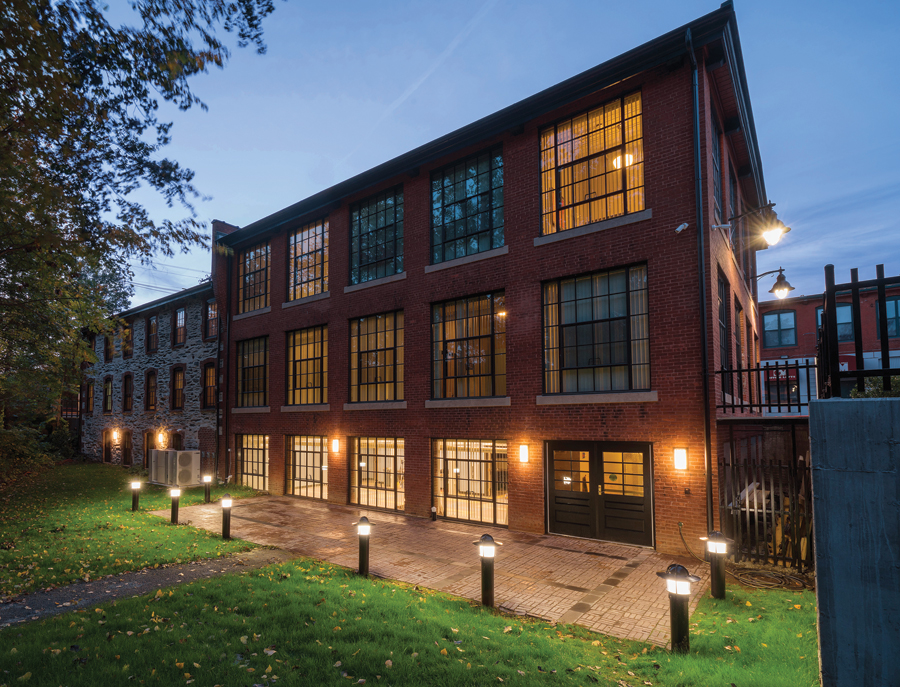 It’s a sweet reward when a project can be done for a good cause, and sweeter still when the altruism is two-fold. Such was the case with the renovation of the Heaton and Cowing Mill in Providence. When the Blackstone Valley Development Corporation discovered the dilapidated structure, they not only saw an opportunity to revive a once thriving textile mill, but a way to address a housing shortage for veterans as well. Saccoccio worked with the BVDC to turn the space into twenty units for veterans’ housing, as well as common
areas, a community space used for job training and education and a patio with views of the West River. “The project was a shining example of how redevelopment efforts can preserve historic buildings while fulfilling a real need in the community,” Saccoccio told the jury. A true win-win for everyone involved. 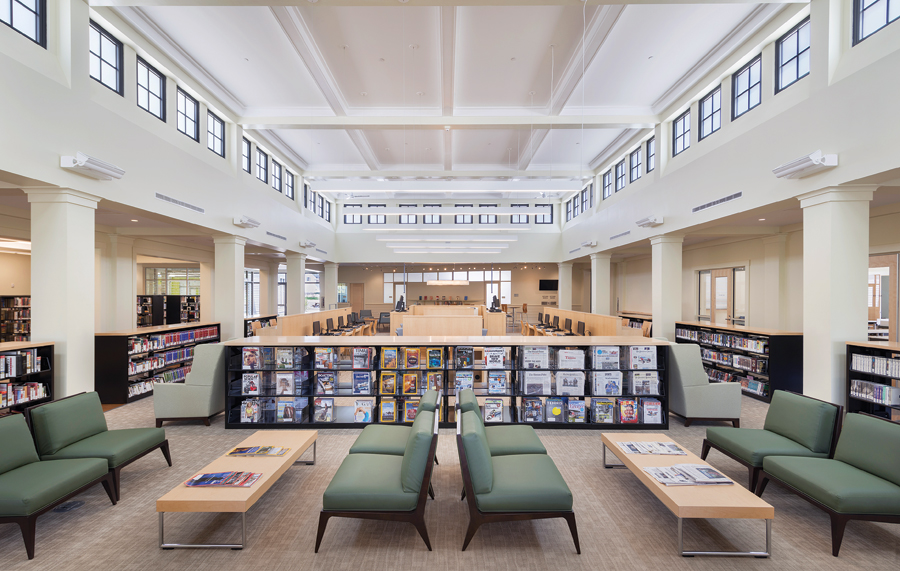 The modern library is about so much more than books and the new Tiverton Public Library is the embodiment of that concept. The bright, 24,000 square-foot space makes room not only for the requisite stacks, but several community spaces, a cafe, children’s and teen libraries and exterior public courtyard spaces as well. “It is designed as the primary meeting place and neighborhood focal point for this growing community of 17,000 people,” Union Studio told our jury, which found the space to be a “very well-developed concept” with a fresh, approachable feel that brought together “traditional details with edgy layers.” 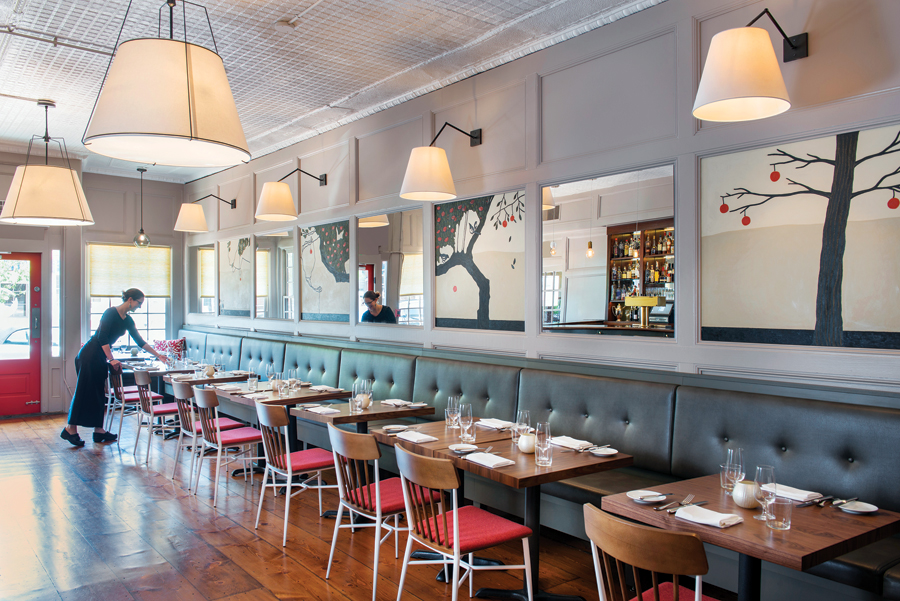 For the acclaimed Persimmon restaurant, relocating from the East Bay to Providence’s East Side was an opportunity to start fresh with a new look. Some existing elements of the new space that had been occupied by another restaurant for forty-five years — such as a wall separating the dining and bar areas — were kept intact, but Libby Slader worked her magic to incorporate many transforming changes as well. The wall between the kitchen and dining area was opened so that diners could watch chef and owner Champe Speidel in action and a chef’s bar and pick-up counter were also added. Dark wood paneling was painted over in light gray and carpeting was taken up to reveal the building’s original wide-plank flooring. The palette is subdued, giving the space a “Belgian bistro feel,” according to our judges, with just a few pops of texture and color, including red stools, a tile wall and works by local artists. 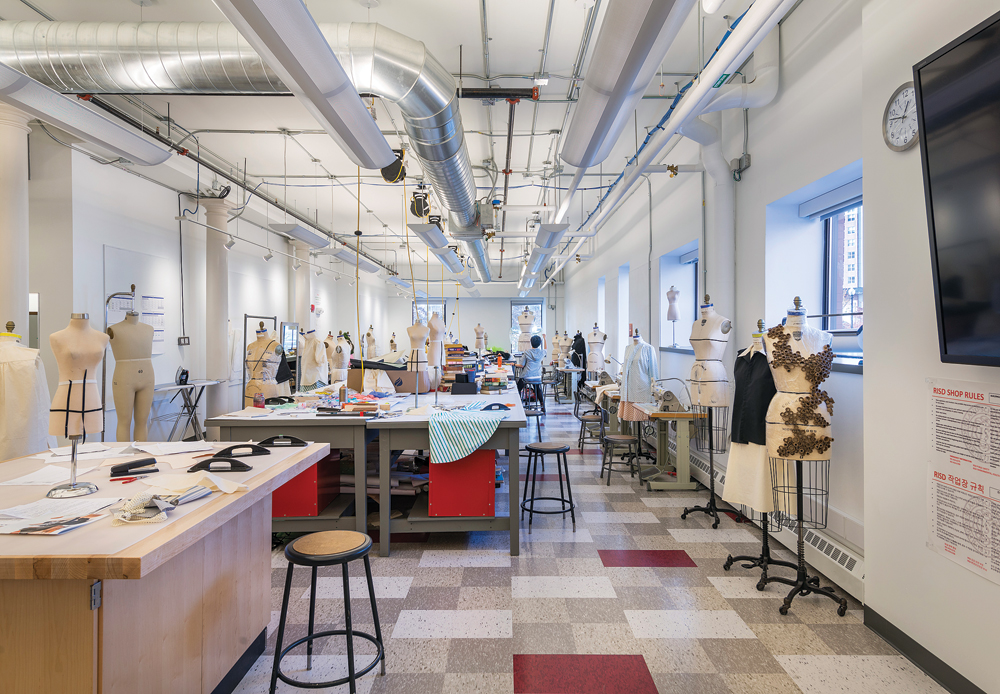 Student work was the focus when designing the new home of Rhode Island School of Design’s apparel design department. LLB aimed to give the aspiring creatives not only a place to showcase their creations, but also plenty of space to get the hands-on, technologically advanced learning they sought from RISD. A turn-of-the-century office building in Providence was converted into a large, well-lit studio with portable walls to reconfigure classrooms and display cases along the corridors to exhibit projects. The aesthetic is industrial and streamlined, with a simple color palette that keeps all the attention on the task at hand.