There’s a new princess in town, and she’s redefining what it means to be “gilded.”

This $18.188 million Narragansett mansion, which was listed today, is the Meghan Markle of real estate. Beautiful, refreshing, modern and Hollywood-worthy, it defies the tradition of luxury real estate in Rhode Island, which is dominated by 100-year-old mansions in Newport. The property, called “Sea Grace,” in a league of its own. And it’s the most expensive house on the market in Rhode Island.

The Beaux-Arts-style home was built in 2016 by owners David and Andrea Reiser. David is in finance and Andrea is a Facebook influencer and “happiness coach” with more than 250,000 followers. (Take a look at her page here.) According to listing agent Heidi Farmer Piccerelli, of Mott and Chace Sotheby’s, the couple did much of the designing themselves. The Reisers have requested that the address remain unlisted to protect their privacy.

The home sits on a two-acre peninsula on Ocean Road and, as you’ll see from the photos, looks straight over the Atlantic towards Martha’s Vineyard. The land itself isn’t without history. It once housed the Whitehall Estate, one of the state’s original palatial summer houses built by Bromo-Seltzer founder, Captain Isaac E. Emerson. After Emerson’s death, and the death of his wife, the home was passed down to Emerson’s stepson, who committed suicide reportedly after a love affair gone bad with an Austrian princess. The estate was then sold to a liquor magnate; following his death in 1969, Whitehall was demolished. 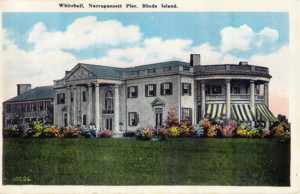 A postcard of Whitehall in Narragansett.

The Reisers bought the land in 2013 and got to work, constructing an efficient mansion — or, as efficient an 11,257-square-foot single-family home can be — with geothermal heating and cooling plus home automation with wall-mounted touch screens. It was built to withstand category four hurricane-grade winds and sits thirty-five feet above sea level, making it an “area of minimal flood hazard.”

RELATED ARTICLES
House Lust: Inside the $5 Million Mansion Owned by Roger Williams’s Descendants
An Art Collector’s Dream Mansion is on the Market in Newport
Two Tiny Beach Houses for Sale in RI